With several events on the World Curling Tour this weekend, there was plenty of action across the country and lots of points up for grabs. Two Manitoba teams came away as the big winners, with Jennifer Jones and Reid Carruthers cashing in tournament wins, in high-valued events. 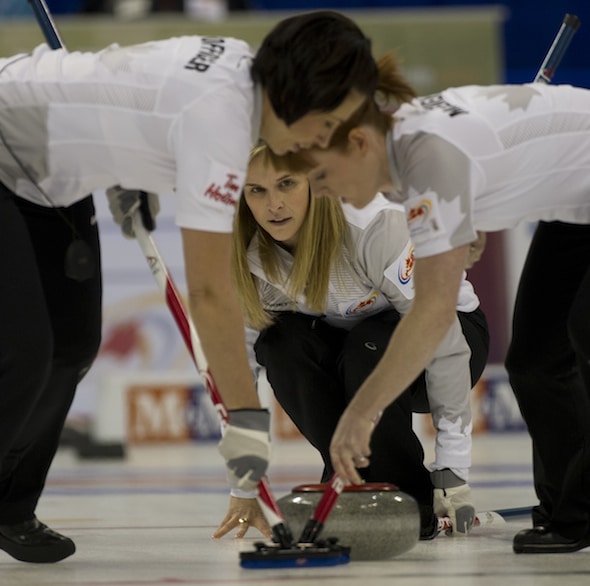 Winnipeg’s Jones, along with Kaitlyn Lawes, Dawn Askin and Jill Officer, beat Ottawa’s Rachel Homan in the final of the Grand Slam Curlers Corner Autumn Gold Curling Classic in Calgary, earning her $14,000 and 40 points on the Canadian Team Ranking System (the maximum for a regular season WCT event). Homan earned 27 points and $10,000 for her runner-up spot. As the season winds into full swing, the CTRS race begins to get interesting. Jones currently sits less than one point ahead of Homan at the top of the list. With a win at Toronto’s Stu Sells Tankard, Clearwater, Ont.’s Sherry Middaugh earned 12.76 points and sits in third place. Middaugh’s win was made more impressive by the fact that she didn’t play as she was attending a family reunion. Jo-Ann Rizzo skipped, backed up by teammates Lori Eddy, Lee Merklinger and Leigh Armstrong. On the men’s side, it appeared that that Sault St. Marie, Ont.’s Brad Jacobs and his top-ranked team on both the CTRS and WCT Order of Merit was marching through yet another event. Before the final in Toronto, Jacobs and his squad had only lost one game in their first three events. Winnipeg’s Carruthers, on the other hand, was working with a brand-new team this season, and looking to improve on their early results. Carruthers, along with Braeden Moskowy, Derek Samagalski and Colin Hodgson, ended up going through the Stu Sells Toronto Tankard undefeated, with wins over Glenn Howard (Penetanguishene, Ont.) Brad Gushue (St. John’s) and eventually Team Jacobs in the final. Carruthers cashed in for $15,000 and 35 CTRS points, which moves him up the leaderboard considerably. It also puts him into 15th place on the WCT Order of Merit, which decides entries to future Grand Slam events. Jacobs earned 25 points, and sits first on the CTRS and the Order of Merit. In other weekend events: — Calgary’s Kevin Koe’s new squad (Marc Kennedy, Brent Laing and Ben Hebert) beat Saskatoon’s Steve Laycock 4-2 in the final of the Direct Horizontal Drilling Fall Classic, earning Koe 18.05 CTRS points, and Laycock 12.635 points. This puts Koe into seventh place on the CTRS. — Halifax’s Ian Fitzner-Leblanc was a 9-3 winner over fellow Haligonian  Tommy Sullivan in the final of the Alexander Keith’s Cashspiel in Halifax, while Emily Dwyer (Amanda Colter, Katrina MacKinnon, Laura Kennedy) won another all-Halifax final, 6-4 over Mary-Anne Arsenault in the final of the ‘s Skyy Vodka Ladies Cashspiel. — Regina’s Randy Bryden (Troy Robinson, Trent Knapp, Kelly Knapp) prevailed 8-2 over Team Schneider in the men’s final of Rocktoberfest at the Callie Club in Regina, while Regina’s Lana Vey (Alexandra Williamson, Natalie Bloomfield, Ashley Williamson) won the women’s title with an 8-4 win over Saskatoon’s Kristen Streifel. Next week, the main action moves to Portage la Prairie, Man., for the Canada Inn’s Mens Classic while the women will be spread out at events in Kamloops, B.C., Medicine Hat, Alta., and Winnipeg. Follow scores from all of the events at curling.ca/scoreboard. Click here for updated CTRS standings.