Northwest Territories skip Jamie Koe of the Yellowknife Curling Centre will meet Saskatchewan’s Max Kirkpatrick of Swift Current in this afternoon’s gold-medal game at the 52nd edition of the Canadian Mixed Curling Championship at the North Bay Granite in North Bay. 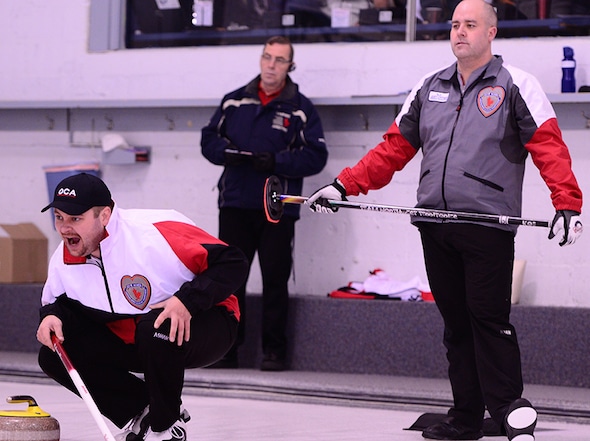 Koe defeated Ontario’s Chris Gardner 7-3 in one of this morning’s semifinals while Kirkpatrick parlayed a pair of three-enders in defeating B.C.’s Wes Craig 7-4. The final is set for 2:30 p.m. Eastern. It is only the third time that a Territories team has made it to a national curling final; interestingly, the most recent occasion was 1994 when Koe played third for big brother, and lost the Canadian junior men’s final to Colin Davison of Alberta. The first time the Territories made it to a final was 1981 when Trevor Alexander lost the Canadian Juniors to Manitoba’s Mert Thompsett. Koe’s team of twin sister Kerry Galusha, Robert Borden and Megan Cormier stuck to their aggressive play that earned their second-place finish in the Championship pool, filling the house with stones in the first end. Laying three in the four-foot, all behind cover, Gardner tried to draw wide around the centre, hoping to catch enough of the four-foot for maybe third shot. Despite great line and perfect weight, he only managed to be fourth shot. Koe responded with a perfect 12-foot straight raise to the full four-foot to score a game-opening four. After a blanked second end, Gardner had a tough, lightweight double takeout for a possible two points. The Ontarians from the Ottawa Curling Club only managed a single as the stone needed to curl another inch to get the much-needed deuce. In the fourth end, Koe was in a bit of trouble until Gardner’s first-stone raise attempt was a bit too strong, allowing Koe to make a double to lie one. Gardner tried to freeze down to a pocket of two stones but was a touch heavy, leaving Koe a straight hit for two, which he’s been making in his sleep this week! In the fifth, Gardner missed a draw for two, settling for the single. Koe scored one in the sixth, needing a hit-and-stay while facing two. Gardner grabbed one on the seventh and the game was conceded midway through the eighth end Saskatchewan’s Max Kirkpatrick, with teammates Jolene Campbell, Chris Haichert and Teejay Haichert, had the hammer in the first end, which they blanked. They gave up a steal in the second, however, and were forced to one in the third end when Kirkpatrick made a nice raise takeout into a pile of stones in the four-foot. The veteran Craig seemingly had control of the game with a nifty score of two in the fourth end and headed to the break with a two-point lead. But then the wheels fell for the Kerry Park Curling Club squad when Kirkpatrick made a great wick-off-his-own-stone takeout to score three in the fifth end. Saskatchewan forced Craig to one in the sixth and scored another three points in the seventh to take command for good. Ontario’s Gardner, Trish Hill, Jon Beuk and Jessica Barcauskas will meet B.C.’s Craig, Sarah Wark, Miles Craig and Michelle Allen will meet for the bronze medal, also at 2:30 p.m. The Saskatchewan-NWT winner will represent Canada next fall at the 2015 World Mixed Curling Championship, Sept. 12-19 at a site to be announced by the World Curling Federation. Saskatchewan is looking for its 10th Canadian mixed championship, which would match Alberta for top spot in the event’s history. No team from the Territories has ever won a Canadian curling championship. For media requests during the event, contact Danny Lamoureux on site at (613) 878-3682 or [email protected]. For event, team and draw information, visit www.curling.ca/2015mixed-en. Click here for a downloadable copy of the rosters. Draw scores/results will be immediately available on the Canadian Curling Association’s website, www.curling.ca.