The Canadian Interuniversity Sport women’s national champion Carleton Ravens planned on using their weekend in Morris, Man., as a tuneup for the upcoming Winter Universiade in Granada, Spain, and as a chance to mingle with their men’s counterparts, the Manitoba Bisons. 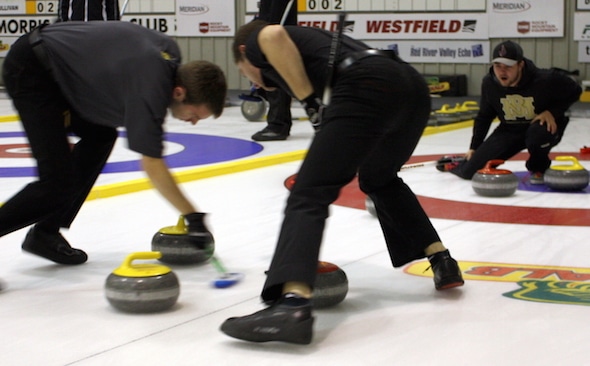 While the on-ice experience was positive for both squads, the biggest benefit from the weekend may be the confidence that came as these Team Canada foursomes continued to come together. Both teams won the right to represent Canada last March in Regina at the CIS/CCA Canadian University Championships, giving them almost a whole year to prepare for the Universiade — the curling competition begins on Feb. 5. Matt Dunstone, who won the 2013 M&M Meat Shops Canadian junior men’s title, skipped his University of Manitoba team to victory over defending champion Alberta’s Brendan Bottcher (the 2012 Canadian and world junior champ, and the bronze-medallist at the 2013 Winter Universiade in Trentino, Italy) in an extra end, while Carleton skip Jamie Sinclair also took down an Alberta team, this one skipped by 2014 Canadian junior champ Kelsey Rocque. 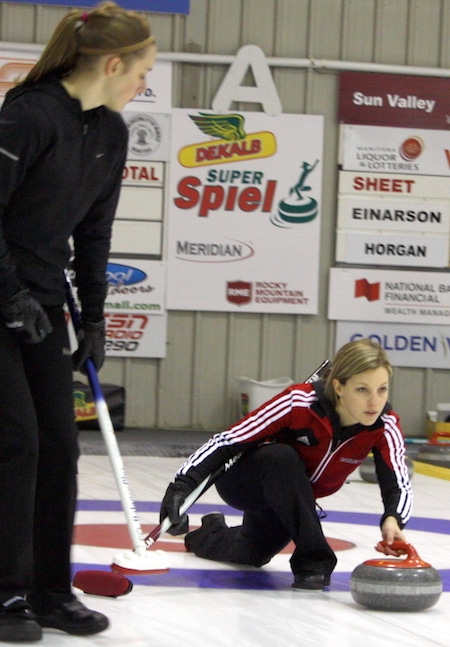 But over the summer, Sinclair, a dual U.S.-Canadian citizen, was offered a spot in the USA Curling’s high performance program — essentially a guaranteed spot on one of the top competitive teams in the country. When she accepted, she committed to chasing her Olympic dream, albeit for a different nation, and left a gaping hole at Carleton’s skip position. The remaining Carleton players, Lauren Horton, Lynn Kreviazuk and Jessica Armstrong, needed a capable competitive skip, who was enrolled in a CIS school, not already committed to a competitive team or season, and able to take two weeks off in February for a trip to Spain. Fortunately for the Ottawa-based students, there was a perfectly good skip that fit the criteria just one province over. Winnipeg’s Breanne Meakin, a former junior national champion (she threw lead rocks for Kaitlyn Lawes in 2009) and Manitoba ladies champion (as an alternate for Cathy Overton-Clapham in 2011), was taking the year off from competition to focus on finishing her nutritional sciences degree at the University of Manitoba. When the Carleton team came knocking, Meakin knew right away it was an offer she couldn’t refuse. “I thought, ‘Wow, what an opportunity!’ ” she said. “I took a couple days to really think about it, but I knew right away that I wanted to do it.” Even though she’d never met two of her potential teammates, she agreed to play, and quickly settled on a schedule for the upcoming season that included two bonspiels, two practice weekends, and the trip to Granada. The rest of the team, meanwhile, played the first few events of the season with a revolving door of guest skips including former CIS champions Hollie Nicol and Danielle Inglis (teammates on the 2009 Winter Universiade silver-medal team in Harbin, China). Their limited time with Meakin has shown to be productive, as the adjustment period turned out to be surprisingly drama-free. “Breanne was a great fit right away,” said Kreviazuk, the only player who knew Meakin beforehand. “The whole process was much easier than expected.” The Manitoba boys, however, had their own set of complications. Each member on the team was already committed to a competitive team separate from the university squad. Dunstone still has junior eligibility wants to repeat that performance (he’s qualified for the Canola Manitoba junior provincials Dec. 26 to 31 in Winnipeg), and take it a step further with a world title. Jim Coleman, Dan Grant, and Chris Gallant also all have their own teams on the go. The Morris event was the first time that they were playing together all season — although a lack of time together clearly wasn’t an issue, as Team Canada won the men’s title in Morris, beating Winnipeg’s Scott Ramsay in the the final to earn $10,000 (guess who’s paying for the Team Canada meals during the stopovers en route to Spain). “We’re where we want to be right now,” said Dunstone. “We’ve been playing, and practising, and have some more events on the schedule over the next couple months.” This event was the first time since March that they’d seen their colleagues from Ottawa. The plan was to spend some time together in between games; to get to know each other and make some arrangements so they could be a unified Team Canada at the championship. Unfortunately the curling gods were not with them, and their competition schedule featured almost exactly opposite draws. The girls were going on the ice just as the guys were coming off all weekend. It wasn’t until Sunday morning, when the guys were playing their quarter-final and the girls were playing a B-event semifinal that they managed to play at the same time.  They did manage to find a few minutes here and there to chat. “We talked as much as we could,” said Dunstone. “Obviously when you go away together, those relationships are going to grow, and we’re probably going to end up with some lifelong friends.” Horton echoed his sentiments. “It’s nice to have other people going through this with us. They seem like a great bunch of guys, and hopefully we can represent Canada well together.” Meakin’s squad qualified for the playoffs in Morris, but lost to Sudbury, Ont.’s Tracy Horgan in the quarter-finals, earning $2,950. In the five previous Winter Universiade curling competitions, Canadian men have won a gold (a star-studded team in 2003 featuring Mike McEwen at skip, his current teammate Denni Neufeld at third, Nolan Thiessen at lead, Marc Kennedy as the alternate and rounded out by second Sheldon Wetting) and a bronze (Bottcher, Mick Lizmore, Brad Thiessen, Karrick Martin and Parker Konschuh). In women’s play, Team Canada has won a gold (Brittany Gregor, Hayley Pattison, Katrine Fisette, Heather Hansen in 2007 at Pinerolo, Italy) and two silvers (Krista McCarville, Amy Stachiw, Laura Armitage and Margaret Carr, 2003 at Tarvisio, Italy; Nicol, Inglis, Laura Hickey and Hilary McDermott, 2009 at Harbin, China).