Glenn Howard drew the eight-foot with his final stone of an extra end to nip John Morris and his Calgary-based Team Canada rink 7-6 in Wednesday’s opening draw of the 2014 Home Hardware Canada Cup, presented by Meridian Manufacturing. In the other men’s game in the morning draw, Calgary’s Kevin Koe scored triples in the first and seventh ends to beat Olympic gold-medallist Brad Jacobs of Sault Ste. Marie, Ont., 8-4. On the women’s side, Heather Nedohin scored three in the first end and four in the 10th beat Val Sweeting 12-6 in a battle of Edmonton rinks, and two-time defending Scotties Tournament of Hearts champion Rachel Homan of Ottawa beat Sherry Middaugh of Coldwater, Ont., 7-4. Howard and his Penetanguishene, Ont., crew of third Richard Hart, second Jon Mead and lead Craig Savill got singles in the second and third ends but gave back singles in the fourth and fifth ends to Morris. After scoring three in the sixth, Howard surrendered three in the seventh. The teams traded singles in the ninth and 10th ends. 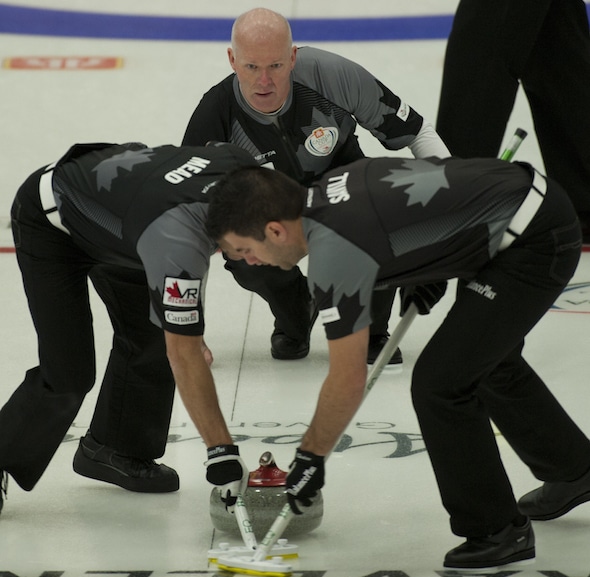 “I thought we won the game a couple of times and kind of let Johnny back in it,” said Howard. “They came back at us big and getting that three back on us hurt but we hung in there.” In the final end Morris’s final stone came up short, opening the door for an easy draw for Howard. “Johnny’s final one as it turns out picked and it was probably going to into the four-foot and I would have had to be a little more precise with my last one,” said Howard. “But it came up light and I made the draw. “We played pretty solid. We can get better but a win’s a win.” Koe and his revamped team of third Marc Kennedy, second (and vice-skip) Brent Laing and lead Ben Hebert got a break in the first end to score their three when Jacobs was narrow with his first shot, rubbing a guard, and heavy and wide with his second. 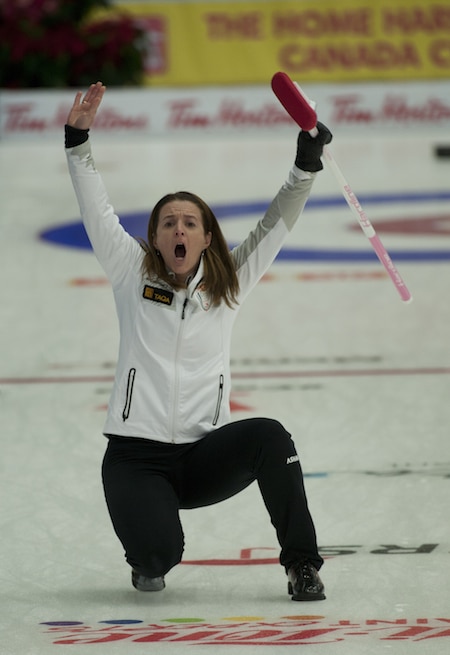 “It was a surprise for sure,” Koe said of Jacobs’s last rock. “He’s not going to miss that most times but the ice was a lot straighter than yesterday, a couple of feet straighter than in practice. He just got caught in a spot.” After Jacobs scratched back with singles in the third and fourth and two in the sixth to tie the game 4-4, Koe cracked three more in the seventh with a paper-thin pick with his first shot and good hit-and-stick with his second. “We were in a bit of trouble,” he said. “I made a good one with my first one but he still had a chance to get out of it. Just a little heavy and didn’t curl for him.” For Jacobs, it was, he said, a case of missing “two crucial shots, gave up two threes and that’s that.” Nedohin and her team of third Amy Nixon, second Jessica Mair and lead Laine Peters got a big three in the first end and stole one in the second. Although they gave up three in third third, Nedohin controlled the game most of the way to the finish. “We capitalized on a couple of their misses,” Nedohin said of the first end. “I thought all of us played well right from the start.” Although Sweeting made a good shot to get three in the third, Nedohin said she was not worried. “I’m going to be honest — unfortunately my rock picked. I had an open hit and those are things we can’t control. Otherwise they were going to get a deuce. They still capitalized, turned it into a three. “I didn’t look at that as a three. I thought you know what, we’re playing the fourth, one up with hammer, that’s exactly how to control the scoreboard.” The Home Hardware Canada Cup continues with draws today at 1:30 p.m. (all times Mountain) and 6:30 p.m. TSN/TSN2 and RDS2 will provide complete coverage of the Hardware Canada Cup. Click here for the broadcast schedule. The Home Hardware Canada Cup format calls for the men’s and women’s teams to play a three-day round robin, with the first-place teams advancing to their respective finals on Sunday, while the second- and third-place teams meet in semi-finals on Saturday, after any required tiebreakers, to determine the other finalists.