Rachel Homan drew the button with final stone to score one and beat Heather Nedohin 5-4 in a battle of unbeaten teams in Thursday morning’s draw at the Home Hardware Canada Cup, presented by Meridian Manufacturing. 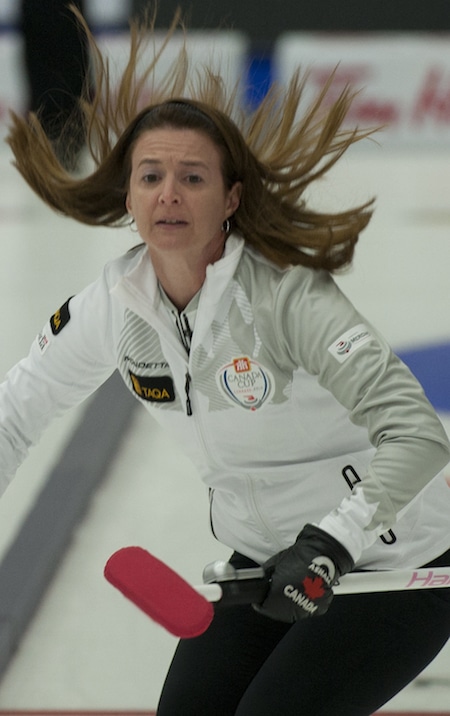 The Homan foursome from Ottawa, with third Emma Miskew, second Joanne Courtney and lead Lisa Weagle, scored singles in the first, second, fourth, sixth and 10th ends to improve to 3-0 and remain the only unbeaten team on the women’s side of the draw. Meanwhile the red-hot Mike McEwen team from Winnipeg continued its winning ways with a 9-4 win over Jim Cotter of Vernon, B.C. That win included another dazzling shot by their skip for four in the seventh end that sealed their win. In the other games, Brad Gushue of St. John’s, N.L., didn’t have to throw his final rock in an 8-6 win over Team Canada, skipped by Calgary’s John Morris, and Jennifer Jones of Winnipeg made a perfect raise takeout for five in the ninth to beat Sherry Middaugh of Coldwater, Ont., 12-7. 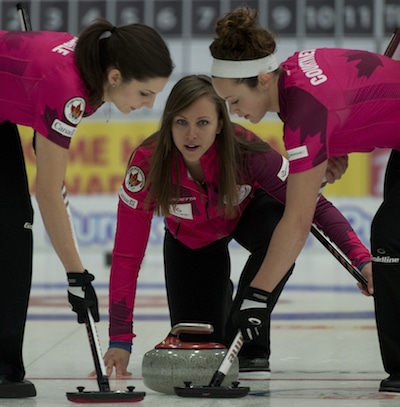 Homan had a 2-0 lead before giving up two to Nedohin’s Sherwood Park, Alta., foursome and the two teams waged a tight battle through the remaining six ends. “It was a tight battle between the two of us. It’s good practice for future games,” Homan said of playing another tight match. “It’s good to keep the score close; you have to make precision shots on good ice.

“There’s so many good teams here you can’t relax in any ends, no matter what the score is.”

McEwen executed to perfection an angled raise takeout to score his four after having built a 5-3 lead through six ends. It wasn’t as dramatic as the double-angle-raise double takeout he made for four against Gushue earlier this season but this time it gave him a victory. 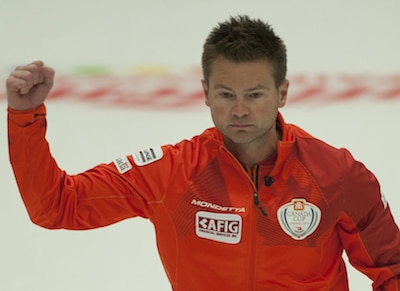 “Ho hum?” he laughed when asked if this shot was ho hum in comparison. “Not as fancy but nice to have it track, sweep it well, throw it well, because those types of shots will win you games down the road.” McEwen, third B.J. Neufeld, second Matt Wozniak and lead Denni Neufeld, moved to 3-0 and will play the only other unbeaten men’s team, Glenn Howard of Penetanguishene, Ont., at 2-0, in the afternoon draw. The Home Hardware Canada Cup continues with the afternoon draw at 1:30 p.m. MST, followed by the evening draw at 6:30 p.m. TSN/TSN2 and RDS2 will provide complete coverage of the Hardware Canada Cup. Click here for the broadcast schedule. The Home Hardware Canada Cup format calls for the men’s and women’s teams to play a three-day round robin, with the first-place teams advancing to their respective finals on Sunday, while the second- and third-place teams meet in semi-finals on Saturday, after any required tiebreakers, to determine the other finalists. For ticket information for the 2014 Home Hardware Canada Cup, go to https://www.curling.ca/2014canadacup-en/tickets/.