And then there was one. Rachel Homan of Ottawa is the only unbeaten team going into Friday’s final round-robin play at the Home Hardware Canada Cup, presented by Meridian Manufacturing. Homan, with her team of third Emma Miskew, second Joanne Courtney and lead Lisa Weagle needed an extra end to finally subdue Val Sweeting of Edmonton 7-6 in Thursday’s sixth draw to run her record to 4-0. 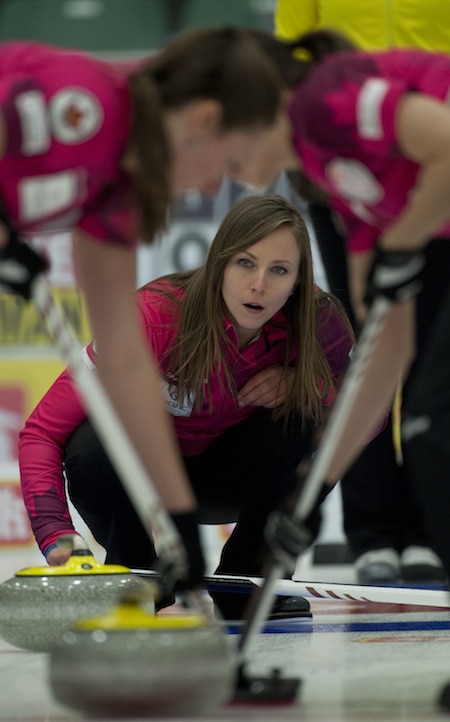 The only other unbeaten team going into the evening draw was veteran Glenn Howard of Penetanguishene, Ont., but he was beaten 7-4 by Olympic men’s champion Brad Jacobs of Sault Ste. Marie, Ont. In the other evening games on the women’s side, Heather Nedohin of Sherwood Park, Alta., with third Amy Nixon, second Laine Peters and lead Jocelyn Peterman, beat Sherry Anderson of Saskatoon 7-4; and Sherry Middaugh of Coldwater, Ont., with third Jo-Ann Rizzo, second Lee Merklinger and lead Leigh Armstrong, got their first win, 8-7 over winless Alli Flaxey of Listowel, Ont. Kevin Koe of Calgary, third Marc Kennedy, second (and vice skip) Brent Laing and lead Ben Hebert counted one in the 11th to beat John Morris of Calgary and his Team Canada foursome 8-7. The women’s results left Homan at 4-0 followed by Nedohin at 3-1, Sweeting, Anderson and Jennifer Jones of Winnipeg at 2-2, Middaugh 1-3 and Flaxey 0-4. 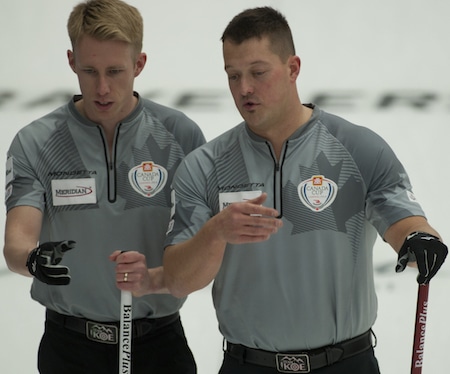 On the men’s side, Howard and Mike McEwen of Winnipeg are tied at 3-1, followed by Brad Gushue of St. John’s, N.L., Jacobs and Koe at 2-2, and Morris and Jim Cotter of Vernon, B.C. at 1-3. Homan had an early 3-1 lead and was up 5-2 after stealing one in the sixth but gave up a deuces to Sweeting in the eighth and 10th. Homan had to draw the four-foot in the 11th for the win. “I knew the path and knew the weight and had the sweepers to get it there,” Homan said of the final shot. “A great game for the fans. A ton of made shots from both teams. We had to fight for every point. They played a great game and we had to play our best to win. 4-0 is definitely a good position but we want to finish strong though.” 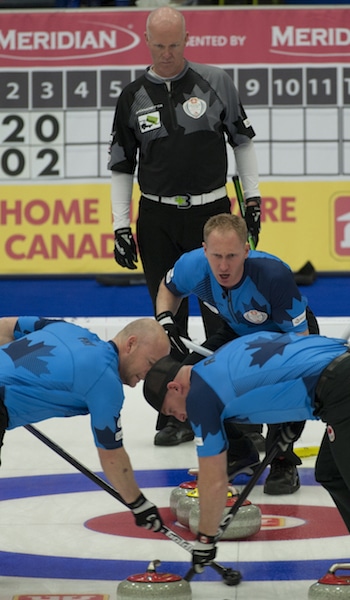 Howard and Jacobs traded deuces in the second and third and singles in the fourth and fifth before Jacobs scored two in the sixth and a steal in the eighth gave his control. “I think we played really well all day,” said Jacobs, who didn’t feel it was a must-win game for his team of third Ryan Fry, second E.J. Harnden and lead Ryan Harnden to remain in contention for the playoffs. “The competition is so stiff and equal anyone can beat anyone out there. I mean 3-3 could be alive. It’s virtually impossible to go undefeated through these events, it’s just too difficult.” Howard said his foursome had a lot of half shots and weren’t as sharp as earlier in the day. “You can’t do that against the gold medallist. We have up a bad deuce in the sixth, we missed a lot of shots and we didn’t play well after that. “We’re still 3-1 and at the top of the heap. With this field if you go undefeated you’ve done something special.” The Home Hardware Canada Cup continues with the afternoon draw at 1:30 p.m. MST, followed by the evening draw at 6:30 p.m. TSN/TSN2 and RDS2 will provide complete coverage of the Hardware Canada Cup. Click here for the broadcast schedule. The Home Hardware Canada Cup format calls for the men’s and women’s teams to play a three-day round robin, with the first-place teams advancing to their respective finals on Sunday, while the second- and third-place teams meet in semi-finals on Saturday, after any required tiebreakers, to determine the other finalists. For ticket information for the 2014 Home Hardware Canada Cup, go to https://www.curling.ca/2014canadacup-en/tickets/.