That, said Glenn Howard, was “one hell of a curling game” even though he lost 5-4 in an extra end Saturday to the red-panted Mike McEwen in the semifinal of the Home Hardware Canada Cup, presented by Meridian Manufacturing. McEwen had a routine draw to the four-foot to win the game and earn his team a shot at the title Sunday against Olympic champion Brad Jacobs. Just as importantly, the victory earned McEwen and his Winnipeg team of third B.J. Neufeld, second Matt Wozniak and lead Denni Neufeld a trip to the 2015 World Financial Group Continental Cup, presented by SecurTek Monitoring Solutions, Jan. 8-11 in Calgary. “I’ll be perfectly honest, today felt like the final for us,” said McEwen, whose team took a successful fashion risk with its red pants (traditional for all of its playoff appearances) and orange shirts. “Tomorrow it’s still going to be real tense and everyone will want to win real bad but today felt like the most was on the line. This was our final. “The Continental Cup, we really wanted that.” 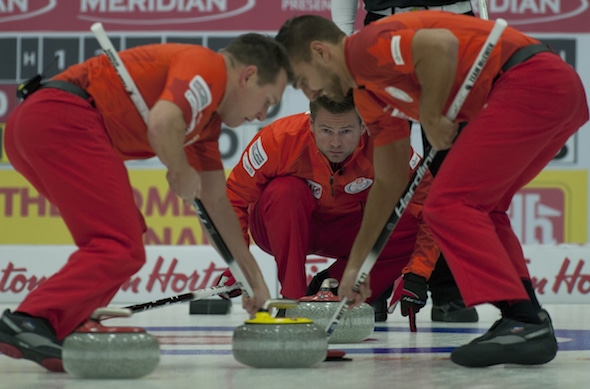 Winner of five events already this season, McEwen blanked the first three ends, waiting patiently for the right opportunity to go for at least two. That came in the fourth end when his front end managed to get two rocks on either side of a Howard stone surrounding the button. That led to a series of take outs and ultimately left McEwen with a routine last rock hit and stick for his deuce. Howard briefly had the possibility for two of his own in the fifth but a well-finished hit and roll by McEwen forced the veteran to draw for a single. 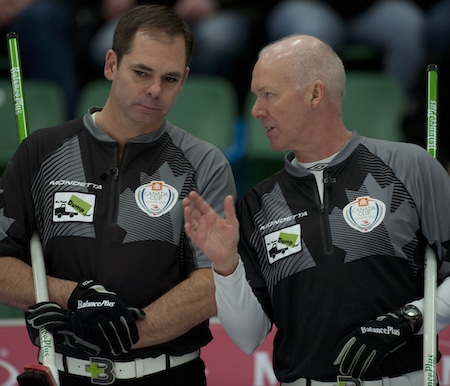 In the sixth, McEwen was facing three Howard counters and had to draw the button to escape with a single. They traded singles in the eighth and ninth. McEwen came up light on a tap back for two in the ninth but made a good one in the 10th to hold Howard to just a deuce and get into the extra end. “Ours rolled out of the rings by an inch.” Howard said of McEwen’s shot in the 10th. “If that doesn’t roll I hit and stick for three. It went out by an inch…it’s a game of inches. “Oh, God, they played well,” he said of the winners. “I don’t feel bad coming off that game. I don’t know if they had any misses and we had a couple and that was it. It was fantastic.” In the 11th, Neufeld made two perfect ticks of Howard guards, moving all four stones to the edge of the ice without removing any of them. “Denni made two perfect chip shots and virtually it was the end of the game,” said Howard. “We had to hope for a pick. “Mike and the boys were unbelievable and I thought we were unbelievable. Basically, they won the draw to the button and made that was it. Sunday’s winning team receives $14,000 and a berth in the Road to the Roar Pre-Trials, meaning they will be among the teams in contention for the 2018 Olympic berth. The losing team gets $9,000 and Howard’s team earned $5,000, plus $2,000 for each of its four round-robin wins for a total of $13,000. The men’s final begins at 5 p.m. MT TSN/TSN2 and RDS2 will provide complete coverage of the Hardware Canada Cup. Click here for the broadcast schedule. For ticket information for the 2014 Home Hardware Canada Cup, go to https://www.curling.ca/2014canadacup-en/tickets/.