Their red and orange outfits may be gaudy but it apparently is having no effect on Mike McEwen’s red-hot Winnipeg team.

Mike McEwen calls out to his sweepers during Sunday’s final. (Photo, CCA/Michael Burns)

McEwen and Co. capped off a wonderful week in Camrose, Alta., Sunday, jumping out to an early 5-0 lead en route to an 8-3, eight-end win over Olympic gold-medallist Brad Jacobs to win the men’s title at the 2014 Home Hardware Canada Cup, presented by Meridian Manufacturing. The win was the sixth in seven events this season for the McEwen foursome. “It feels like an explosion of wins the last few months,” he said. “It’s beyond our expectations. We knew we could be the best team in the world but we had to find a new level” After making a number of off-ice changes to the team’s support staff, McEwen said, “it’s amazing to get this much validation this quickly.” Already the leaders in money earnings and Canadian Team Ranking System points, the team earned $14,000 for the win and a berth in the Road to the Roar Pre-Trials. On Saturday they beat Glenn Howard of Penetanguishene, Ont., in the semifinal to earn a spot on Team Canada for the 2015 World Financial Group Continental Cup, presented by SecurTek Monitoring Solutions, Jan. 8-11 in Calgary. Team Jacobs, which earned $9,000 for reaching the final, has already qualified for the World Financial Group Continental Cup. All teams also earned $2,000 for each round-robin victory; each finalist had four. After making a relatively simple tap back to score two in the first end, the McEwen crew of third B.J. Neufeld, second Matt Wozniak and lead Denni Neufeld stole three in the second. 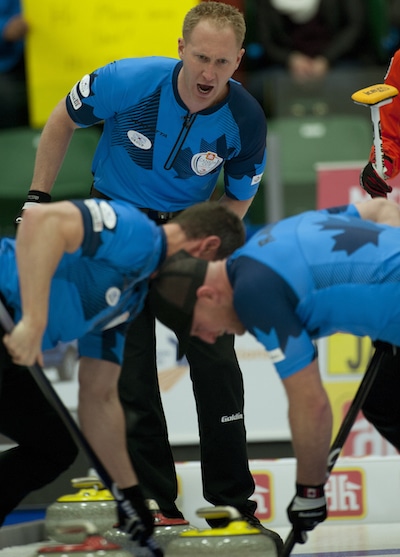 “That was a gift,” McEwen said of the steal and the 5-0 lead. “That’s not going to happen against a team like that very often, it might not happen again for years. It just shows that being off just a little bit, whether it’s a few extra feet of weight or a few inches of line can dramatically swing a game.” McEwen already had three counters around the button when Jacobs, from Sault Ste. Marie, wrecked on a guard trying for a double. McEwen put up another guard and this time Jacobs, the Olympic men’s champion, was heavy on a soft hit-and-roll, giving up the critical three. “We came out sloppy,” a dejected Jacobs said of the first end. “They got two corners on us. It looked real good from that point on if you were McEwen. They got up to a 5-0 lead and that was pretty much game over.” Jacobs, third Ryan Fry, second E.J. Harnden and lead Ryan Harnden, came back with two in the third and threatened to steal in the fourth when they built the house with three counters. But Neufeld ended that threat with a triple raise, double kill. Two shots later McEwen used heavy weight to pound a frozen Jacobs stone out of the house to count two and a 7-2 margin. “I hit the broom, throw the right weight and it worked out for us,” said a humble Neufeld, who shot a brilliant 100 per cent. “Wow. Try that 100 times and see how many times you make that as good as he did,” McEwen said of the shot. “Then he came back with his second shot with a beautiful soft weight roll. I lost a little focus in the third end. But that’s the kind of third I have, he wasn’t letting us lose focus . . . he got things back to right.” The McEwen foursome wasn’t missing much, shooting a combined 89 per cent, and even when they did give Jacobs chance in the seventh to get back in the game, Jacobs couldn’t capitalize. Needing just a hit and stick for two, Jacobs got the hit but his shooter rolled out, scoring one and the teams shook hands one end later.