Just when you thought Mike McEwen’s season was approaching inhuman levels, he goes and wins the Home Hardware Canada Cup in Camrose, Alta., over six of the best teams in the country. 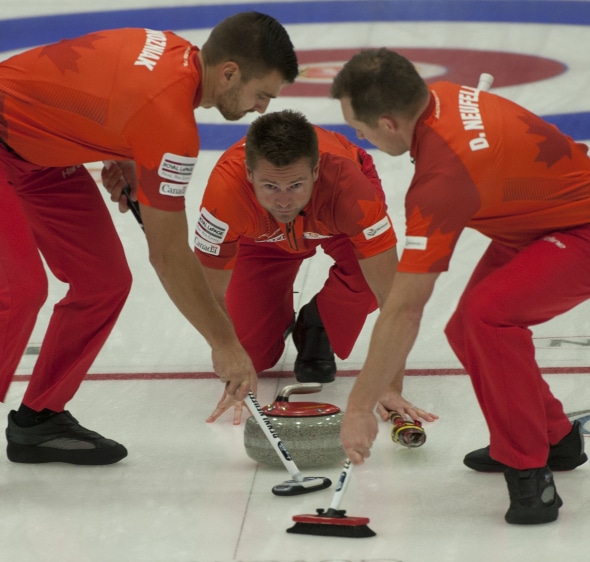 If you were expecting a return to earth this weekend in Yorkton, Sask., at the Grand Slam of Curling’s Canadian Open, you’d be sadly mistaken again. Team McEwen (with B.J. Neufeld, Matt Wozniak and Denni Neufeld) won its first two games at the Slam and will now face Brad Gushue (St. John’s) in one of the ‘A’ Qualifiers. That means, given this is a triple-knockout event, that he has to win any of his next three games to qualify for a playoff spot. Given the way they’ve been playing all year, that seems like a veritable certainty. Meanwhile, Calgary’s Kevin Koe punched his ticket to the playoffs, already by knocking off Brendan Bottcher of Edmonton in the other ‘A’ qualifier. Koe, the event’s defending champion,  started with wins over Winnipeg’s Reid Carruthers and Calgary’s John Morris to reach the final. Every other team in the star-studded field has already lost and is fighting through the ‘B’ and ‘C’ brackets. Carruthers will face Brad Jacobs of Sault Ste. Marie, Ont., in the B semifinal, after sending his former skip, Winnipeg’s Jeff Stoughton, to the ‘C.’ Toronto’s John Epping sits in a ‘B’ Final, waiting for the winner of Saskatoon’s Steve Laycock and Penetanguishene, Ont.’s Glenn Howard. Meanwhile Morris, Stoughton, Scotland’s David Murdoch and Switzerland’s Sven Michel lurk in the ‘C’, waiting to face whoever might drop down to fight for the last playoff spots. There’s $100,000 in prize money on the line, as well as critical points on the Canadian Team Ranking System (or World Curling Tour Order of Merit).  The winner will take home 40 points, which in the case of Jacobs and McEwen could mean taking over, or retaining the world No. 1 status. Sixteen women’s teams are also in Yorkton, fighting for their own share of a $100,000 purse. For the first time, the Canadian Open has a women’s event, and most of the world’s best teams showed up to take part. Following a second-place finish at the Home Hardware Canada Cup, Ottawa’s Rachel Homan has started strong and marched to the ‘A’ Final, where she will face Winnipeg’s Kristy McDonald. Val Sweeting, who beat Homan in the Home Hardware Canada Cup final on Sunday, is trucking through her own ‘A’ Side draw, where she’ll face Heather Nedohin, in another all-Edmonton matchup. World No. 1 Jennifer Jones (Winnipeg), No 3. Eve Muirhead (Scotland) and No. 6 Silvana Tirinzoni (Switzerland) are all in the ‘B’. Keep checking curling.ca for scores throughout the event.