During every Tim Hortons Brier final between the seventh and eighth ends, two RCMP officers bring the Brier Tankard out for everyone to see. 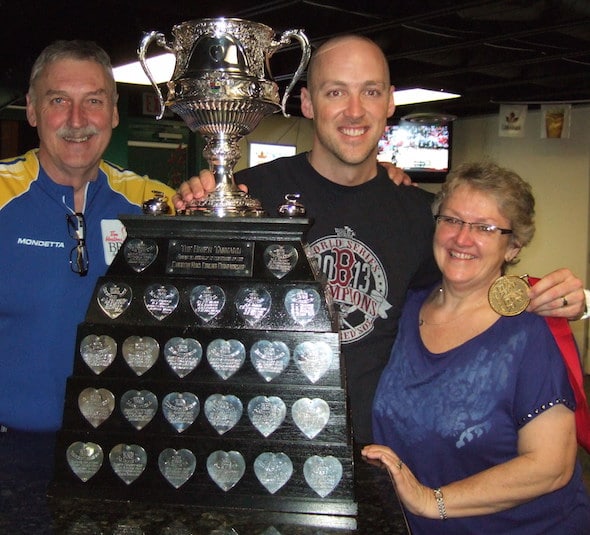 From watching the TV coverage every year the commentators invariably say that the athletes on the ice can’t look at the prize being brought out for everyone to see; they think it distracts you from the task at hand. From playing in three finals the past five years I can tell you this: I look at it. It’s the prize we all want at the end of a long Tim Hortons Brier week, so why wouldn’t you look at it? Every sport has something that their athletes strive for, a prize you want to get your hands on no matter what it takes. It’s bigger than the prize money or the big contract. The Green Jacket, the Stanley Cup, the Claret Jug, the World Series trophy, the Grey Cup — they all fit that description. We’re lucky in Canadian men’s curling to have the Brier Tankard as our holy grail for many reasons. For one, it looks cool. It’s big and pretty heavy (the night you win the Brier it doesn’t feel that heavy, though). It has a big silver cup on the top that could be used to eat your morning cereal or enjoy your favourite beverage out of. 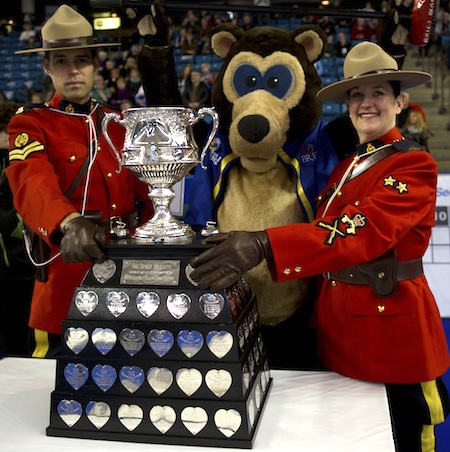 But the main reason I find the trophy so interesting is that there are hearts lining the trophy with the names of every curler who has ever won the Brier. Similar to the Stanley Cup, I think the draw for the trophy is that you join elite company when you win it, and your name is etched on it forever, along with all of those who came before you. I was lucky to have the opportunity to have the trophy this fall, and it gave me the opportunity to look at it every day and go through all the names. It absolutely blows my mind that I’ve won the trophy as many times as guys like Ed Werenich, John Kawaja or Ed Lukowich. Those guys are first ballot hall-of-famers and they have won it twice. I would never consider myself in their category so it just seems a bit surreal. Something I was often asked after we won the Tim Hortons Brier in 2010 was how long we got to have the trophy for that night. We really had it for only five minutes while we took photos on the ice for the media after the game. When we were done, I was taken for mandatory drug testing and when I got out the trophy was gone, packed away and on the truck. So this year when we won, I made sure to tell the organizers that I wanted to see the trophy that night. So the CCA found someone from the Kamloops host committee to chaperone the trophy, and our team got to enjoy the evening at the rink with our wives, kids, extended family … and the Brier Tankard. We have pictures of our kids with it; I have pictures with my grandma and my parents with it. It gave us the chance to cherish the moment a little more with the trophy we’ve been striving for our entire career. In October before the season got started for us, I was able to go home to Brandon, Man., for a junior curling clinic with around 60 kids, and I made sure the Tankard accompanied me to show the kids. The opportunity to take the trophy to Brandon, the place where I learned how to curl and truly fell in love with the sport, was special for me. Not only did I get to teach junior-aged kids between eight and 18 years old from the Brandon area a few tricks of the trade, they also got to see the trophy up close. They got to see that a kid who grew up in their club in small=town Manitoba ended up winning this awesome trophy. Hopefully it shows some of them that it is a reachable dream, that it can be done. I gave the trophy back but luckily I already know I will be in the 2015 Tim Hortons Brier in Calgary as the first ever Team Canada. I hope I get the chance to see the RCMP carry the trophy out from ice level again this year. If I am on the ice in the final I guarantee I will be looking at it when they come marching out, and will be doing whatever I can to lift it up again! (Nolan Thiessen is a two-time Canadian champion who plays lead for Team John Morris, AKA Team Canada, who will be competing in the 2015 World Financial Group Continental Cup, presented by SecurTek Monitoring Solutions, Jan. 8-11 in Calgary; and the 2015 Tim Hortons Brier, presented by SecurTek Monitoring Solutions, Feb. 28-March 8 in Calgary).