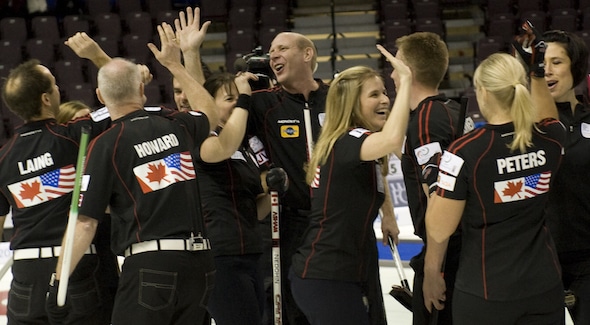 I’ve played in two of these in the past, and I have to say they’re so different from our regular competitive events that it’s hard to describe. We played in the December 2008 event in Camrose, Alta., and lost a close battle with the World team, and then easily dispatched our competition in January 2011 in St. Albert, Alta., an event I attended mere hours after getting home from my honeymoon. Those of us on the team like to call that event “The Stomping in St. Albert” (we won 298-102 under the old 400-point scoring system, easily the highest ever). There are many strange aspects of the event. For one, it feels way more important than it probably is. Most curling fans can’t recite how many Continental Cups you’ve won or even played in, unlike the total Brier, World or Olympic titles on your resumé. However, when you’re competing at a Continental Cup, you feel like you HAVE to win, like your week is going to be ruined if you’re not lifting the trophy at the end of the week. 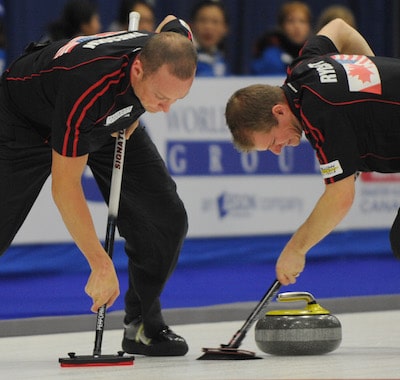 One of the reasons for this is that curling teams are used to travelling with three other players and competing with those guys week in and week out. The best teams are the ones that want to win for each other as much as they want to win for themselves. But when we gather with our teammates at a Continental Cup, there are five other teams to go along with the three guys you’re used to playing with. Instead of wanting to win for the other three guys on your team, now you want to win for the other 23 players on your team. That adds pressure to you as a player, but also makes it more rewarding when you win. If you don’t think it matters, just look at the teams when the deciding points are won this week — you’re going to have 24 players jumping up and down like they just won the lottery. Another twist that teams must get used to is cheering for teams we’re normally trying to beat. I wrote on this blog earlier this summer about how most teams are good friends off the ice despite being fierce competitors on it. We get along with most of the other teams but you won’t see many of us cheering for them in the stands at an event. This week, however, we will be on the bench for every game and cheering for McEwen and Jacobs like we’re freshmen walk-ons on a 14-seed in March Madness, sniffing an upset over Duke. It’s unusual but at the same time enjoyable for one weekend to be able to cheer for those teams we normally battle tooth and nail with. If you really want to know how strange it is, ask our team Captain Randy Ferbey what it was like to cheer for Kevin Martin at the inaugural event in 2002? For Randy, that would have been akin to cheering for the Soviets in the ’72 Summit Series. The event this year is the first under the new format where Canada is on our own, with no help from our neighbours to the south — just the pride of the Maple Leaf. After playing in enough international competitions, I know that for teams in Europe the only thing better than winning is winning against Canada. We have always been the gold standard for curling, so hanging losses on us feels extra special. We in the Team Canada dressing room need to use that as motivation to match their intensity and ensure that they get on their flights back to Europe disappointed. For the fans in attendance in Calgary and those watching at home across Canada, there’s the potential for some interesting matchups this week. On both the men’s and women’s sides, there are potential rematches of the Olympic finals from last February in Sochi as Brad Jacobs could line up against David Murdoch of Scotland and Jennifer Jones will probably end up battling Margaretha Sigfridsson at some point. I know for Pat, Carter and myself, we would love to get a crack at Thomas Ulsrud and three-fourths of Niklas Edin’s teams to pay them back for knocking us out of the gold-medal hunt at the Worlds in China last year. The Mixed Doubles is always interesting for fans, with men and women playing together and, this year, with the added intrigue of when Mike and Dawn McEwen put their relationship on the line by battling on the same team. Will they be able to co-exist as well on the ice as they do off of it? What happens when Mike misses a shot and gets the looks of not only teammate disappointment but one of a disappointed wife? Happy Wife Happy Life is going to be taken to a whole new level in Calgary. I think Mike is going to stand on his head in their game; no man wants that look of disappointment from his wife, so there should be minimal tension in the team room that night when they are done. All in all, it is going to be a special week in Calgary. Putting the Maple Leaf on is always exciting and it will hopefully bring the best out of all six teams wearing it. What will put us over the top is having a full house at the Markin MacPhail Arena. Let’s have flags flying, faces painted, fans going crazy for every Canadian made shot. Let’s fill the house and get loud and give us that little extra energy on the ice that will hopefully be enough to give us the first ever three-peat in Continental Cup history! (Nolan Thiessen is a two-time Canadian champion who plays lead for Team John Morris, AKA Team Canada, who will be competing in the 2015 World Financial Group Continental Cup, presented by SecurTek Monitoring Solutions, Jan. 8-11 in Calgary; and the 2015 Tim Hortons Brier, presented by SecurTek Monitoring Solutions, Feb. 28-March 8 in Calgary).