Rocking around the clock – and raising money for charity

The numbers tell only part of the story: 10 curlers on the ice at the Coldwater & District Curling Club playing 288 ends in just over 80 hours, raising money for local charities and setting the (as yet unofficial) Guinness World Record for longest curling game. The rest of the story is behind the scenes, and it starts with Bill Pearce of Bala, Ont., the driving force who took on the challenge of not only organizing but also playing in this charitable endurance feat. 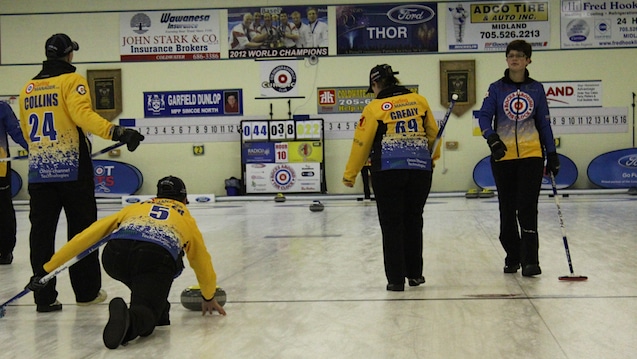 “(I’m) just a 49-year-old father of three girls, with a strong sense of community and the inability to shut my brain off when I should be sleeping,” says Pearce, who began curling at age 12 in a two-sheet club in Bala, Ont. “People say I think too much, but I tell them it’s good to keep the brain moving.” Pearce’s brain was certainly moving when, a few years ago, he came up with the idea of getting some friends together to see how long they could curl. A world record wasn’t in the mix initially – it was just a fun idea that morphed into something bigger. “My family has always been known for coming up with unique ideas to get the community involved and I presented an idea to the Bala Curling Club,” he says. “Less than seven weeks later, on March 14th 2011, I stepped on the ice with nine curlers and curled for 60 hours, raised a bunch of money for the club and saw just how many volunteers and friends you could cram into a small clubhouse.” But Pearce was sure that was a one-time record-breaking experience. “I joked that my wife would kill me if I ever suggested anything like that again,” he says. 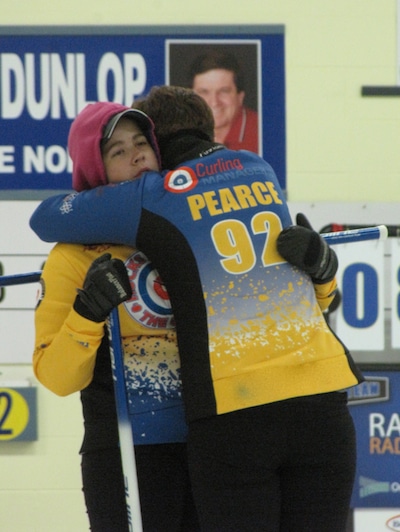 After 40 hours of continuous curling Amanda Pearce (facing camera) gets an encouraging hug from her twin sister Brittany. The 22-year-olds are the only women in Canada to have beaten two world records for the longest curling game (Photo Clarissa Yahn)

Fast-forward to October 2014 at the Coldwater & District Curling Club in Coldwater, Ont. After months of preparation, Pearce is at it again, only this time it’s the “Rocks Around the Clock” event: four days of Learn to Curl clinics, curling equipment displays, a Hot Shots competition, a Celebrity Funspiel and the show-stopper: Pearce and nine other curlers will attempt to break the record for Longest Curling Game. It wasn’t just about the game, however. Pearce and his family, his fellow curlers, and over 200 volunteers involved in the event wanted to ensure the record attempt would benefit the community as well. Two local charities were chosen as the focus of the team’s fundraising efforts: Gilda’s Club of Simcoe/Muskoka, a free program that supports anyone touched by cancer; and Radios For Radiation, two local radio stations raising funds for a CT Simulation Suite in the radiation department of the Simcoe Muskoka Regional Cancer Centre. “The support for the two cancer initiatives holds a very emotional tie for me,” says Pearce, who has had a couple of health scares recently. “I am no different than anyone else who, unfortunately, has been touched by cancer in some way. Both of these charities are very deserving of this event’s support.” Pearce also wanted to do something in the name of late curler Keith Reilly, who held a special place in the Pearce family’s thoughts. “The sport has given my family the opportunity to meet many great people,” he says. “Two years ago, ironically at a charity bonspiel hosted by Gilda’s Club in Barrie, Ont., my twins and I had the opportunity to meet and play against 1967 Brier Champions Ron Manning and Keith Reilly. Keith instantly took a personal interest in my daughters’ careers and offered whatever help he could to them up until his passing. The sport of curling has many colourful characters. Sadly we have lost a few of the greats in the past few years, and I just want to do my part to keep their passion for the game going.” So, for over 80 hours, Pearce and his team – Perry Marshall, Corrine Bertolo, Andrew Vanbodegom, Stephen Collins, Lauren Grealy, Amanda Pearce, Michael Foster, Jeff Vanbodegom, Brittany Pearce – curled. They also battled sleep deprivation, sore feet and aching joints, not to mention the cold and the inevitable emotional highs and lows. “Some of the curlers went from happy to sad, to cranky to downright miserable at times,” says Pearce. “But we all worked together to bring the spirits back onto a positive note as quickly as we could.” But there were highlights as well as pain. “Even when we were getting tired, it was incredible to see the support of the community and the host club, coming out in the middle of the night in crazy outfits to curl beside us and keep our spirits up,” he says. “Failure was not an option for me and when I felt myself getting a little low on drive, I would remind myself of everyone who was and is still fighting cancer, and that would give me the motivation to carry on.”

After 10 months of hard work organizing the record-breaking attempt, the team now has to wait for the official word from the Guinness World Record officials to hear whether the new record stands. “Eighty hours, 21 minutes, 31 seconds,” says Pearce. “That is the new Unofficial World Record. We now have to assemble the package of video and all the documents to send to Guinness for verification.” Oh, yes – and the score? Team Radios for Radiation 286, Team Gilda’s Club 178, and about $4000 raised for charity in memory of Keith Reilly. World record or not, Pearce is content. “It’s difficult to describe how much of a toll this took on everyone but the smiles on everyone’s faces seem to cover the pain pretty well,” he says. “All for great causes and well worth what we had to endure.” 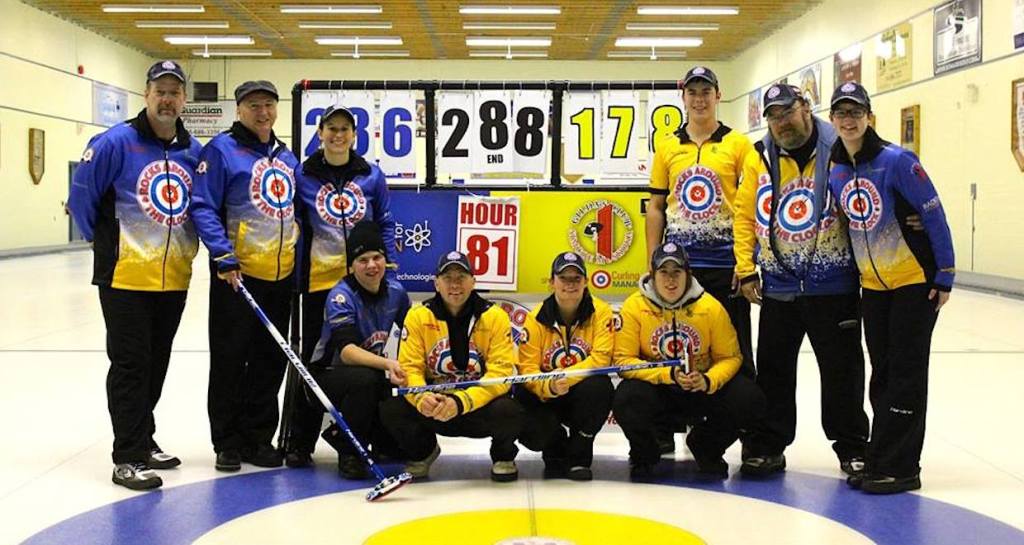