When Niklas Edin’s long runback try came up wide, giving Mike McEwen the full point that guaranteed Canada’s victory, non-playing members cheering on the bench swarmed over the boards to ignite an on-ice victory celebration that temporarily halted the two other games still in process. “We could kind of see the other matches going well and the timing just worked out for that to happen,” McEwen said of posting the clinching point. “It was kind of cool to put that final blow on the board.” And he, like the fans in the stands, was surprised to see his teammates storm onto the ice. “Yeah because there’s those huge LED signs and they’ve been ragging on us, Do Not Jump Over These. So it was kind of cool that nobody listened.” In the end McEwen beat Edin 3.5 to 1.5, the identical scores to Rachel Homan’s win over Margaretha Sigurdsson and the Pat Simmons-skipped mixed doubles team victory over the European foursome skipped by Torger Nergård of Norway. Teams play eight-end games in the skins competition, scoring points by counting two or more with last rock, or one point or more without. The first six ends are each worth half a point with the final two ends worth one point each. While McEwen, third B.J. Neufeld, second Matt Wozniak and lead Ben Hebert posted the clinching point, it was the Simmons-led team of Lori Olson-Johns, Carter Rycroft and Rachelle Brown who got the team fired up early. Normally the third on the John Morris-skipped Team Canada, Simmons was handed the skip spot for the mixed doubles game and he made two McEwen-like shots in the second and fourth ends to win full-point carryover skins to put Canada in position to clinch the cup before this afternoon’s final round of skins. 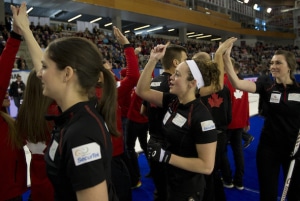 “Crazy wasn’t it?” replied Team Canada coach Rick Lang when asked about the Simmons performance. “Pat came through in spades and kind of got the spirit going today. Put us on the board early and everyone followed.” But, added Lang, it was a solid team performance from Thursday’s opening draw that ultimately led to victory. “We had six teams right at the top of their games; extremely well prepared, excited to be here and committed to the effort,” he said. “We had no weak links in our chain, whatsoever.” The victory was worth $52,000 to Team Canada. There are three more skins matches this evening, at 6:30 p.m. MT, with $13,000 still on the table for the team that wins the most skins. 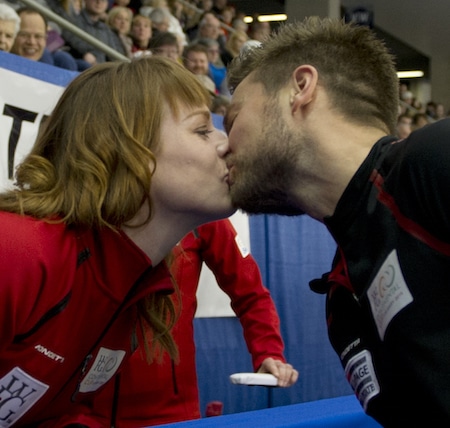 “They’ll be playing to put a bit more green in our pocket,” McEwen said of the three teams in the final draw. “They’ll be playing hard … it should be entertaining although the cup is secured.” TSN (RDS2 in French), the exclusive television network for the CCA’s Season of Champions, will provide complete coverage of the WFG Continental Cup. This story will be posted in French as soon as possible at www.curling.ca/2015continentalcup-fr/