How do you break this team up? I mean, what good reason is there to not send us back out there for the next World Financial Group Continental Cup after the destruction that just took place in Calgary? 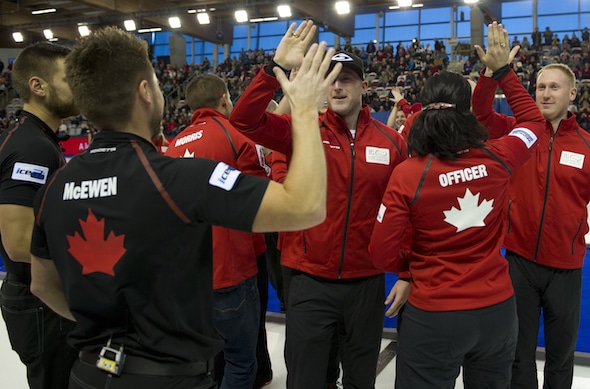 Team Canada had plenty to celebrate about during the 2015 World Financial Group Continental Cup in Calgary. (Photo, CCA/Michael Burns)

I am kidding, of course, but after the results of Calgary, it’s fun to think about the Canadian Curling Association sending all of our teams back to defend the title. We know that the WFG Continental Cup is a fantastic bonus for the teams that win the next Tim Hortons Brier, Scotties Tournament of Hearts and Home Hardware Canada Cups next year, and the system in place means that all six of our teams can’t be back in Vegas next January. Team Canada put up the second-highest point total in the 12-year history of the event (when you base the total by percentage of total points available; 2015’s 42 of 60 is second only to 2011’s 298 of 400). 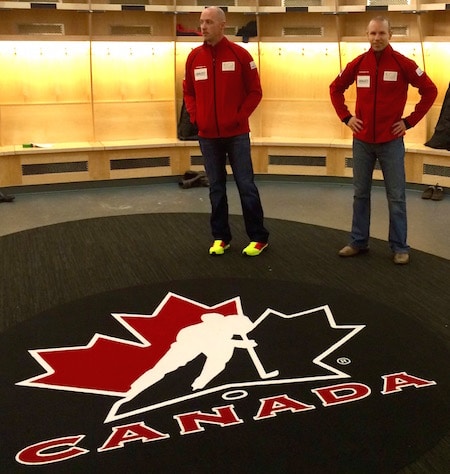 We were fortunate enough to be able to use Hockey Canada’s main dressing-room.

I wrote prior to the event how much fun can be had in the WFG Continental Cup, and I hope I can talk for Team Canada in saying that we all had a blast this past week in Calgary. It started off on the first day when Paul Webster pulled some strings and got us access to the Hockey Canada dressing room for the week. Instead of having the normal hockey dressing rooms that can be found in any arena throughout Canada, we had access to the world-class Hockey Canada NHL-level room, complete with full stalls for everyone, a warmup workout area, and a players’ lounge that just happens to be furnished with various World Championship trophies and pictures of Hockey Canada’s teams that have stood atop of the podium. Canadians in general do not reveal their patriotism often but even the most reserved of us would say that being in that room is exciting and motivating when you are playing with the Maple Leaf on your jersey, whether it be curling, or hockey or tiddlywinks, and I think being in there helped get our week kicked off in the right direction. After being on the winning side twice and the losing side once at this event, I can’t express enough how important team momentum is. It seems like the team that gets an early lead on Thursday and Friday can use those positive vibes, and snowball that energy throughout the lineup with all teams feeling good and playing better, not wanting to be the team that stops the momentum. Calgary was no different; it started off on Thursday with Canada winning all three sessions and not looking back. It seemed like every time we needed a big shot, or a big miss from Europe, we got it and the points just continued to pile up. We had goals put up on the board in the dressing room; first it was 30.5 for the event title, then 37.5 for the bonus and then 40.5 for the second bonus that was announced before the final draw. It kept us motivated all week and never wavered from our goals. For Team Morris in particular it was a good opportunity to compete, win, and put the struggles of the fall of 2014 behind us. I don’t think I’d say we were lights out but we definitely improved our play from the level it was pre-Christmas, which is a great sign. Not having the provincial playdowns to play in (don’t worry, I’m not complaining) means we have minimal competitive opportunities to play and improve before the Tim Hortons Brier so we needed to use the WFG Continental Cup to improve and I think that happened. We carried that on during the Pinty’s All-Star Curling Skins Game this past weekend in Banff, where we were able to get a big win over Kevin Koe’s team, so we were able to put a little money in our pockets and get some more games on swingy ice. I think going into Christmas it was easy for us to sit back and sulk. However, I’ve played at a high level for enough years to realize that when things are going good or bad that you are never as bad as you think you are at your rock bottom or as good as you think you are when you are on top of the mountain. John, Pat, Carter and I are all good curlers and we didn’t forget how to curl. We just need to work through these games and find out how to win together. Hopefully we’ve gained some valuable knowledge and the process of constant improvement continues. Last but certainly not least, I’d be remiss if I didn’t discuss the Calgary curling fans who filled the Markin MacPhail Centre. The atmosphere at a WFG Continental Cup is very different from any other event; it’s the only place where you will find Jill Officer on the bench leading cheers throughout the arena or have JohnnyMo starting the wave. The curling fans in Calgary made a tonne of noise and got behind Team Canada from the start. I know that it gave us that little advantage that was needed to continue to play well and finish off the European team. Carter, the philosopher of curling, looked down at the other end assessing what John should throw and said to me “just rip it down there, make the double, and let the crowd blow the roof off the place.” That’s unusual for curling, and it shouldn’t have to be. I want that same atmosphere at the Saddledome in March for the 2015 Tim Hortons Brier. Curlers want that kind of excitement, we want noise in the building, and we want people cheering for their favourite teams and waving flags. It makes it extra special and I think that’s my challenge for everyone returning to the Tim Hortons Brier in March — come out and make noise. Don’t worry about distracting us; just lose your mind cheering for your province or your Canadian champs. Let’s show the sporting public that curling is not a bunch of fans sitting on their hands and being reserved. Let’s show them that the atmosphere in our buildings can be fun, exciting and loud. After all it’s called the Roaring Game for a reason. Prove to me that it isn’t just the curlers roaring … but the entire building! (Nolan Thiessen is a two-time Canadian champion who plays lead for Team John Morris, AKA Team Canada, who will be competing in the 2015 Tim Hortons Brier, presented by SecurTek Monitoring Solutions, Feb. 28-March 8 in Calgary).