Curler Lloyd Campbell has celebrated many accomplishments, both on and off the ice, but the biggest one yet happened on Sun. Jan. 4, when the family and friends of this Saskatchewan curling legend gathered to celebrate his 100th birthday. About 80 people dropped in at the William Albert House in Emerald Park, Sask., to wish Lloyd, the 1955 Brier champion, a happy birthday and share a piece of his specially designed cake. 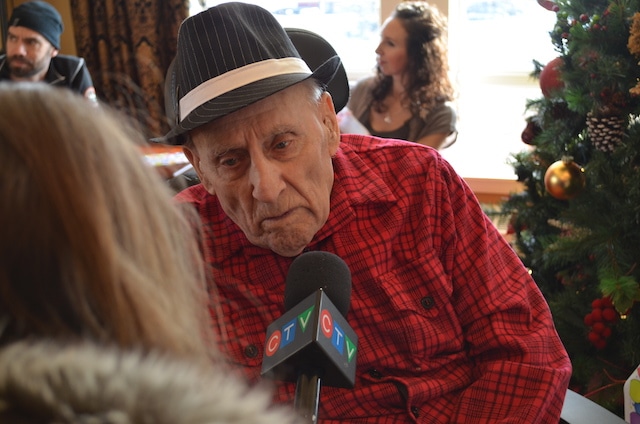 Saskatchewan’s 1955 Brier champ, Lloyd Campbell, is interviewed by local media at his 100th birthday celebration on Jan. 4 (Photo courtesy of the Campbell family)

Born in 1915 on the Campbell family homestead near Avonlea, Sask., Lloyd grew up on the farm with siblings Verna, Glen, Don, Gordon, Garnet and Margaret. He enjoyed lots of success on the ice, teaming up at various times with his father, Sandy, and brothers to win a number of provincial championships and compete as finalist three times at the Brier, winning the coveted tankard at home in Regina in 1955, Saskatchewan’s jubilee year. In archival footage of the 1955 event, the Saskatchewan foursome features prominently. 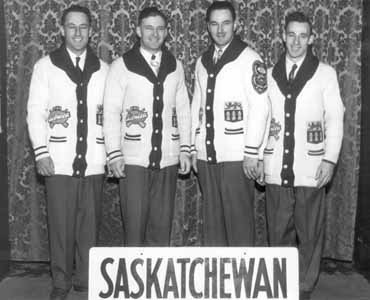 “The Campbell rink (Garnet, Glen, Don and Lloyd) received a good luck telegram from more than 500 hometown supporters during the event and won, undefeated,” says Lloyd’s daughter, Jo. “Later they were presented with a silver tea service at the Saskatchewan Legislature. Garnet Campbell is known for his thank-you speech of 46 words in total!” The Campbell boys were also Grand Prize-winners in various other big-name spiels. In 1950, they won the Saskatoon and Rosetown “auto” spiels, and donated one of their prizes (yes, a car!) toward the building of an ice rink for skating and three sheets of curling ice in Avonlea. The January 1956 issue of Maclean’s magazine told their story in a feature titled “Nobody can curl like the Campbells – Sandy Campbell and his five boys from Avonlea, Saskatchewan.” 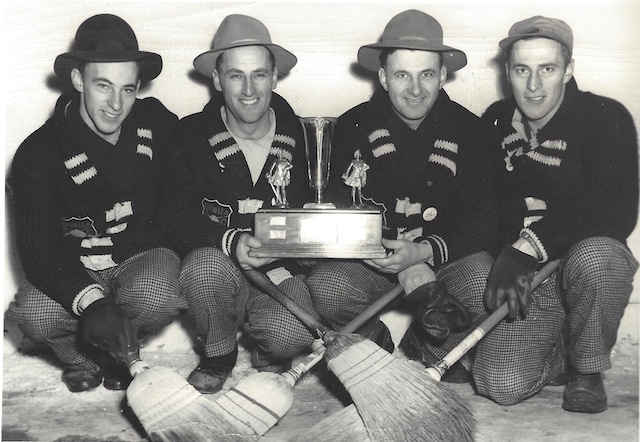 Away from the ice, Lloyd was deeply involved in farming, says his daughter. He moved to the Pense area and established his own farm operation in 1940, raised a family, and retired there in 2006. “During his farming years Lloyd became a long-standing member of the Canadian Seed Growers Association as an Elite Pedigreed Seed Grower beginning in 1952, helping establish many new varieties of crops for the prairie region,” says Jo. “He was also noted for being a pioneering entrepreneur in many things, including a founding member of the Palliser Wheat Growers Association, and establishing a thriving pedigreed seed business, along with selling short lines of grain bins, fertilizer and grain dryers.” At his party on Jan. 4, Lloyd was the centre of attention, chatting with visitors, answering questions from the local CTV crew who came to film the festivities, and commenting on how much curling has changed, noting that for many of today’s top curlers, it’s almost a job. But for him and his father and brothers, it was all for fun. And about that birthday cake: “It was specially designed to reflect his life,” says Jo. “The farm, the family tree of life and, of course, a curling rock.” 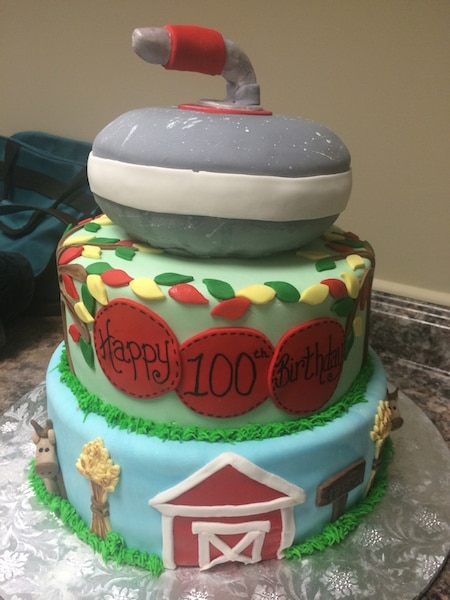 A specially designed cake reflects the life of 100-year-old Lloyd Campbell: the farm, the family tree of life and a curling rock (Photo courtesy of the Campbell family)