CORNER BROOK, N.L. — When it comes to enthusiasm at the 2015 M&M Meat Shops Canadian Junior Men’s and Women’s Curling Championships, competitors will be extremely hard-pressed to match the first-day performance of home-province hopeful Greg Smith. 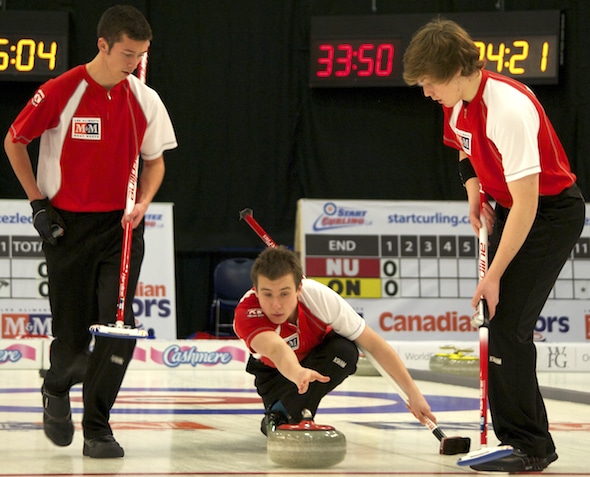 The 18-year-old sales rep from St. John’s (some 700 kilometres to the east of here) had the crowd at the Corner Brook Civic Centre in the palm of his hand on Saturday night thanks to his combination of loud exhortations of his teammates, his old-school high-lift backswing on the delivery and his general delight at representing Newfoundland/Labrador at the Canadian Juniors. All of that, combined with his team’s emphatic 8-3 win over Ontario’s Mac Calwell (Belleville), made for a memorable Saturday night for Smith. “It was a lot of fun tonight,” agreed Smith “I’m pretty crazy on the ice — just a little bit loud. I guess I’m the male Heather Nedohin. But it was a good time. The boys played fantastic, and I followed suit. “It’s an amazing feeling to look up in the crowd and see the Newfoundland flags, and seeing the people from your province rooting for you and cheering their little hearts out. It’s an amazing feeling, it really is.” Smith, backed by third Ryan McNeil Lamswood, second Kyle Barron and lead Craig Laing (the team is based in Stephenville, 80 kilometres southwest of Corner Brook), improved to 1-1 in the round-robin standings thanks largely to a double-takeout in the sixth end to score a go-ahead three, followed quickly by a steal of one in the seventh and two more in the eighth to prompt handshakes from the Ontarians (1-1) and more cheers from the home-province faithful. “I tried to feed off the crowd,” said Smith, before adding with a laugh: “I was a little hungry; I only had a muffin and a coffee today, so I had to feed off something.” In other men’s action on Saturday night, P.E.I.’s Tyler Smith (Montague) won a roller-coaster 12-9 decision over the Yukon’s Joe Wallingham (Whitehorse) to improve to 1-1. The Islanders gave up five in the seventh end to the Yukon (0-2), but rallied with four in the eighth, then stole singles in the ninth and 10th ends for the victory. Elsewhere, Alberta’s Karsten Sturmay (Edmonton) scored deuces in the fourth, sixth and eighth ends for a 6-4 win over New Brunswick’s Rene Comeau (Fredericton). Alberta improved to 2-0, while New Brunswick evened out at 1-1. Also, Saskatchewan’s Jacob Hersikorn (Saskatoon) capped a perfect 2-0 opening day with an 8-6 triumph over Northern Ontario’s Tanner Horgan (Sudbury). Saskatchewan scored a go-ahead two in the eighth end, then put the win in the bank with a stolen point in the ninth. It was Northern Ontario’s first game of the event. 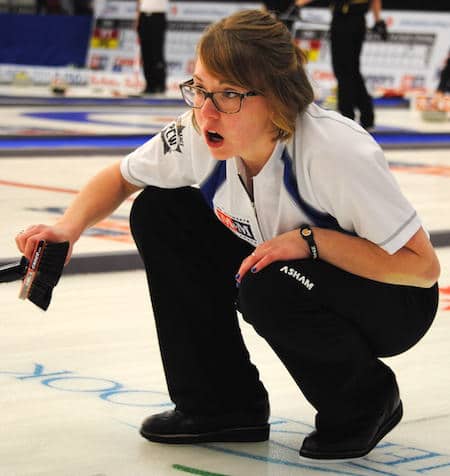 In women’s play, meanwhile, 2013 champion Corryn Brown and Team B.C. (Kamloops) improved to 2-0 with an 8-6 win over 2014 bronze-medallist Mary Fay of Nova Scotia (Chester). B.C. took an early 5-0 lead thanks to two in the first end and a stolen three in the second, then hung on for the win. Nova Scotia dropped to 1-1. Prince Edward Island’s Veronica Smith (Cornwall) bounced back from an earlier loss to post a 10-8 win over Newfoundland/Labrador’s Sarah Hill (St. John’s). P.E.I. tied the game 7-7 with three in the seventh, then added a deuce in the ninth and a stolen point in the 10th to drop Newfoundland/Labrador to 0-2. Defending world junior champ Kelsey Rocque of Alberta (Edmonton), with her new lineup, needed an extra end to score a 5-4 victory over Manitoba’s Beth Peterson (Winnipeg). Alberta improved to 2-0 while Manitoba dipped to 1-1. In the other Saturday night game, Saskatchewan’s Kristen Streifel (Saskatoon) scored two in the 10th end for an 8-6 triumph over New Brunswick’s Justine Comeau (Fredericton). Saskatchewan finished the opening day with two wins, while it was the first game for New Brunswick. Action at the 2015 M&M Meat Shops Canadian Juniors continues on Sunday, with draws at 10 a.m., 2:30 p.m. and 7 p.m. (All times NST; EST plus 90 minutes). Round-robin games are taking place at both the Corner Brook Civic Centre and the Corner Brook Curling Club. Once the top three teams for each gender have been determined, all playoff games will be played at the Civic Centre. The men’s and women’s playoffs will be televised by the TSN network as well as RDS2 (French). The women’s semifinal is scheduled for Saturday, Jan. 31, at 1:30 p.m. NST/noon EST, with the gold-medal game at 8 p.m. NST/6:30 p.m. EST. This story will be posted in French as soon as possible at https://www.curling.ca/2015juniors-fr/ The full scoreboard can be viewed at https://www.curling.ca/scoreboard/