It had the makings of a disastrous day for Team Quebec second Lewis South. 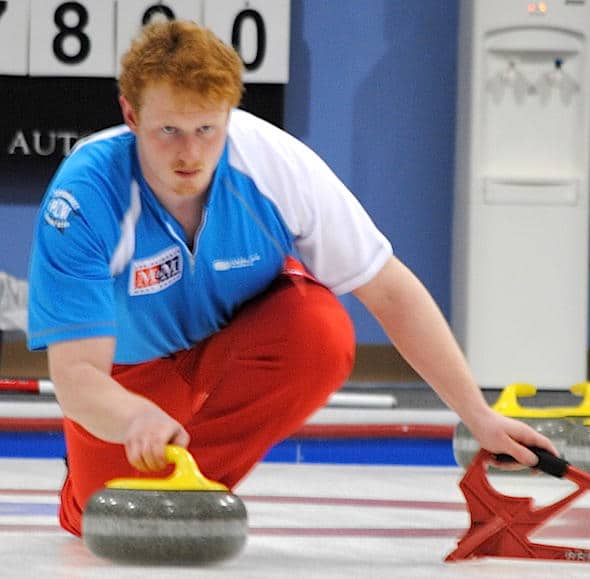 His first delivery of the 2015 M&M Meat Shops Canadian Junior Curling Championships Saturday at the Corner Brook Curling Club resulted in a busted zipper on his brand-new fire-engine red curling pants — a dilemma he wasn’t made aware of until the third (!) end when his mother, Nancy, frantically caught his attention. No matter — some strategically placed safety pins solved the problem for that game, a 9-6 win over B.C.’s Paul Henderson. Then, a quick stitch-up job courtesy of skip Félix Asselin’s mother Marie-Claude got him ready for his team’s afternoon assignment against defending champ Braden Calvert of Manitoba. A couple hours later, South and his Quebec teammates — third Alex Cormier and lead Émile Asselin (Félix’s brother) round out the team — were grinning ear-to-ear after finishing off a flawless 2-0 day with an 8-6 win over Manitoba, thanks to stolen deuces in the eighth and ninth ends. “We’re 2-and-0? Hey, it’s a good start to the week,” chuckled the lanky redhead from Montreal. “Lots of distractions, but we’re working our way through them. Maybe I distracted the B.C. boys this morning. Who knows?” So, how does a wardrobe malfunction happen on the first day? Well, South is taking the heat for this one. “I was supposed to pick the pants up a week ago Thursday, but I didn’t actually get them until the day before we left, and didn’t try them on until we got here. Hey, I was busy — mergers and acquisitions, you know,” he said with a smile. “But they’re the same make of pants as my black pants and I figured they’d fit exactly the same. But, uh, they’re a bit of a tighter fit. I wouldn’t say the zipper was defective; maybe my waistline was a bit bigger? I don’t know. But it split real nice. “Normally I’m afraid of a pick (a rock catching a piece of debris on the ice) when I’m throwing, but this time I was more afraid of a pin-prick.” In other men’s play Saturday afternoon, Saskatchewan’s Jacob Hersikorn rallied from a 4-1 deficit with a steal of two in the eighth end and one more in the ninth for a 6-5 win over P.E.I.’s Tyler Smith; 2014 silver-medallist Rene Comeau of New Brunswick was a 5-3 winner over Joe Wallingham of the Yukon; and Alberta’s Karsten Sturmay opened the game with five in the first end and cruised to a 9-4 triumph over Matthew Miller of the Northwest Territories — the first games for all of those teams. In women’s play, the Yukon’s Bailey Horte evened her record at 1-1 with an 8-3 win over Nunavut’s Sadie Pinksen (0-2); Ontario’s Chelsea Brandwood improved to 2-0 with a 10-6 victory over Quebec’s Émilia Gagné; and Saskatchewan’s Kristen Streifel (1-0) rallied from a 6-1 deficit to beat Newfounfdland/Labrador’s Sarah Hill (0-1) 9-7. Action at the 2015 M&M Meat Shops Canadian Juniors continues Saturday with the day’s final draw at 7:30 p.m. (All times NST; EST plus 90 minutes). Round-robin games are taking place at both the Corner Brook Civic Centre and the Corner Brook Curling Club. Once the top three teams for each gender have been determined, all playoff games will be played at the Civic Centre. The men’s and women’s playoffs will be televised by the TSN network as well as RDS2 (French). The women’s semifinal is scheduled for Saturday, Jan. 31, at 1:30 p.m. NST/noon EST, with the gold-medal game at 8 p.m. NST/6:30 p.m. EST. This story will be posted in French as soon as possible at https://www.curling.ca/2015juniors-fr/ The full scoreboard can be viewed at https://www.curling.ca/scoreboard/