CORNER BROOK, N.L. — Braden Calvert is keenly aware that he’s not just wearing that traditional buffalo logo on the back of his Manitoba jacket at the 2015 M&M Meat Shops Canadian Junior Curling Championships. 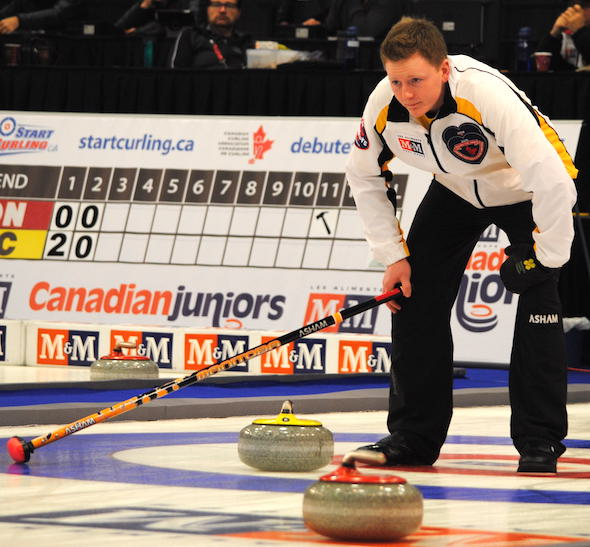 The 19-year-old University of Manitoba student knows there’s also a target there, which goes with the territory of being the skip of the defending Canadian junior men’s championship team. Calvert and his squad from Winnipeg — third Kyle Kurz, second Lucas Van Den Bosch, lead Brendan Wilson, coach Tom Clasper — have been reminded of that here on the opening weekend of the 2015 M&M Meat Shops Canadian Juniors, dropping their opener on Saturday to Quebec’s Félix Asselin and then being pushed to the last rock to shade Nova Scotia’s Matthew Manuel 6-5 on Sunday at the Corner Brook Civic Centre. “That was pretty important (to win against Nova Scotia),” agreed Calvert. “We came out pretty rusty yesterday; we had a chance to win and we couldn’t pull it off, so it was good to pull this one off. We need to stay sharp and a little more focused and we’ll be good to go. “Coming back with the Manitoba jacket, every team is going to come out and play you tough and you have to be at your best.” It wasn’t easy against the Halifax-based Bluenosers; Manitoba played a textbook first six ends to take a 5-1 lead. But Nova Scotia bounced back with two in the seventh and steals of one in the eighth and ninth ends to tie it up, and force Calvert to make his final shot of the game — an open hit looking at two. Both teams now are 1-1. “Coming into this, I was kind of happy to see that they weren’t kind of cocky and thinking they were going to come in be at the top,” said Clasper. “They looked at the field and saw that it was pretty good, and we’re going to have to curl. I think they knew they had the target on their back and they had come to play.” Calvert and Co. had, arguably, the toughest road to get to Corner Brook, needing to beat 2013 Canadian champ Matt Dunstone (who’ll skip Canada at the upcoming Winter Universiade in Spain) in the Manitoba final. 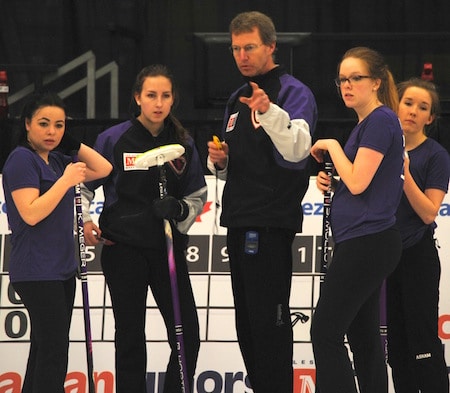 “It was a pretty big accomplishment for us,” said Calvert. “Our goal was to win provincials and it wasn’t an easy path to do that, and we just feel privileged to be playing today and the rest of the week. We have to keep getting better here. We showed there that we can play well; we just have to put 10 ends together.” In other men’s action, Asselin’s Quebec team (Montreal) improved to 3-0 with a 17-2 win over Nunavut’s Kane Komaksiutiksak (Rankin Inlet; 0-2); B.C.’s Paul Henderson (Victoria) evened out at 1-1 with a 6-4 triumph over Ontario’s Mac Calwell (Belleville; 1-2); and Northern Ontario’s Tanner Horgan (Sudbury; 1-1) took four in the second end and stole two more in the seventh and sailed home with a 9-3 win over Matthew Miller of the Northwest Territories (Inuvik; 0-2). In women’s play, Ontario’s Chelsea Brandwood and her Hamilton foursome improved to 3-0 with a 7-5 win over Northern Ontario’s Krysta Burns (Sudbury). Ontario scored three in the ninth end to take control, dropping Northern Ontario to 0-2. Elsewhere, Carina McKay-Saturnino’s Northwest Territories team from Inuvik hit the win column with a 7-6 triumph over New Brunswick’s Justine Comeau (Fredericton). The Territories (1-1) trailed 4-1 after five ends but turned the game around with three in the sixth end and a stolen deuce in the eighth to drop New Brunswick to 0-2. Also, Manitoba’s Beth Peterson (Winnipeg) improved to 2-1 with a 14-3 win over Nunavut’s Sadie Pinksen (Iqaluit; 0-3); and Quebec’s Émilia Gagné (Jonquière/Alma) improved to 1-1 with a 10-2 victory over the Yukon’s Bailey Horte (Whitehorse; 1-2). Action at the 2015 M&M Meat Shops Canadian Juniors continues on Sunday, with draws at 2:30 p.m. and 7 p.m. (All times NST; EST plus 90 minutes). Round-robin games are taking place at both the Corner Brook Civic Centre and the Corner Brook Curling Club. Once the top three teams for each gender have been determined, all playoff games will be played at the Civic Centre. The men’s and women’s playoffs will be televised by the TSN network as well as RDS2 (French). The women’s semifinal is scheduled for Saturday, Jan. 31, at 1:30 p.m. NST/noon EST, with the gold-medal game at 8 p.m. NST/6:30 p.m. EST. This story will be posted in French as soon as possible at https://www.curling.ca/2015juniors-fr/ The full scoreboard can be viewed at https://www.curling.ca/scoreboard/