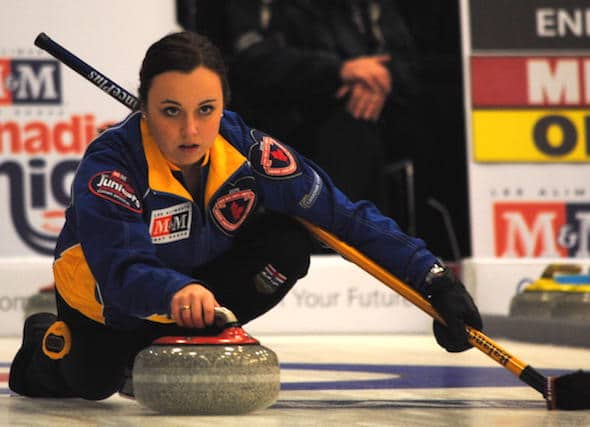 Alberta’s Kelsey Rocque and her team from Edmonton are off to a 3-0 start at the 2015 M&M Meat Shops Canadian Juniors. (Photo, Amanda Rumboldt)

The 20-year-old University of Alberta student, who has won her first two games at the 2015 M&M Meat Shops Canadian Junior Curling Championships, is doing it with a completely new lineup than the one that prevailed last year in Flims, Switzerland. Her three teammates from last season — Keely Brown, Taylor McDonald and Claire Tully — all were in their final season of junior eligibility, so Rocque (Marcel’s third cousin, if you’re curious) had to start from scratch. Working with team coach Amanda-Dawn Coderre and her long-time University of Alberta coach Rob Krepps, Rocque put together a new team featuring third Danielle Schmiemann, second Holly Jamieson and lead Jessica Iles, and so far it’s working out superbly, including an impressive 10-3 win over previously unbeaten Chelsea Brandwood of Ontario on Sunday afternoon at the Corner Brook Civic Centre. “I mean, obviously the pressure was on us to get out of Alberta and to play well here. But we took it one step at a time,” insisted Rocque, whose team improved to 3-0 to take the lead in Pool A. “We were happy when we qualified out of the Northern (Alberta playdowns), we were happy when we won provincials, we were happy just to be here. We’re just taking it one game, one rock at a time.” The Albertans broke open a tight 3-3 game through five ends by scoring three in the sixth end, and adding stolen deuces in the seventh and eighth ends before Brandwood’s team from Hamilton (3-1 after the loss) conceded. 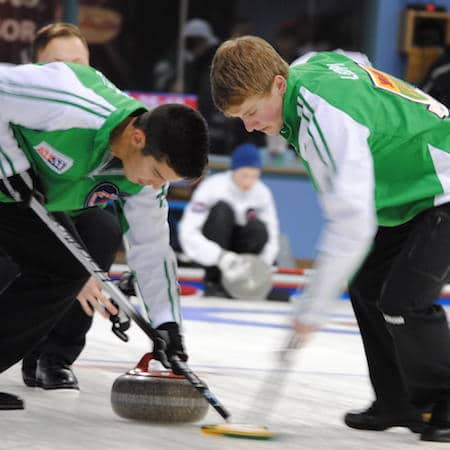 “We played really well as a team, so it was a good win to get under our belts, for sure,” said Rocque, who’s hoping to replicate the feat of Scotland’s Eve Muirhead with back-to-back gold medals (Muirhead did it in in 2008 and 2009). “I have three great girls in front of me, so I thought we had a chance here. It’s really tough to get out of Alberta, we had to beat some really great teams there. We’re really fortunate to be here. But the girls all get along fantastic and they’re all awesome players.” In other women’s play, 2013 Canadian champ Corryn Brown of B.C. and Saskatchewan’s Kirsten Streifel both improved to 3-0 and tied for the lead in Pool B with wins on Sunday afternoon. Brown’s team from Kamloops rolled to a 12-3 win over Newfoundland/Labrador’s Sarah Hill (St. John’s; 0-3) by scoring three in the fourth end, stealing two in the fifth and three more in the sixth. Streifel, meanwhile, had a tougher time of it. Her Saskatoon quartet stole single points in the ninth and 10th ends to pull out a 5-4 win over Prince Edward Island’s Veronica Smith (Cornwall; 1-2). In the other women’s game, Quebec’s Émilia Gagné (Jonquière/Alma) was a 12-7 winner over Manitoba’s Beth Peterson (Winnipeg). Quebec improved to 2-1 while Manitoba evened its record at 2-2. In men’s play, meanwhile, Saskatchewan’s Jacob Hersikorn (Saskatoon) won his third straight to open the M&M Meat Shops Canadian Juniors, putting together a 6-2 win over the Yukon’s Joe Wallingham (Whitehorse). Saskatchewan improved to 3-0, alone on top of Pool B, while the Yukon remained winless in three games. Elsewhere, defending champ Braden Calvert of Manitoba (Winnipeg; 2-1) downed Ontario’s Mac Calwell (Belleville; 1-3) 11-6; New Brunswick’s Rene Comeau (Fredericton; 2-1) was a 10-4 winner over P.E.I.’s Tyler Smith (Montague; 1-2); and B.C.’s Paul Henderson (Victoria; 2-1) knocked off Nova Scotia’s Matthew Manuel (Halifax; 1-2) 8-5. Action at the 2015 M&M Meat Shops Canadian Juniors continues on Sunday, with the day’s final draw at 7 p.m. (All times NST; EST plus 90 minutes). Round-robin games are taking place at both the Corner Brook Civic Centre and the Corner Brook Curling Club. Once the top three teams for each gender have been determined, all playoff games will be played at the Civic Centre. The men’s and women’s playoffs will be televised by the TSN network as well as RDS2 (French). The women’s semifinal is scheduled for Saturday, Jan. 31, at 1:30 p.m. NST/noon EST, with the gold-medal game at 8 p.m. NST/6:30 p.m. EST. This story will be posted in French as soon as possible at https://www.curling.ca/2015juniors-fr/ The full scoreboard can be viewed at https://www.curling.ca/scoreboard/