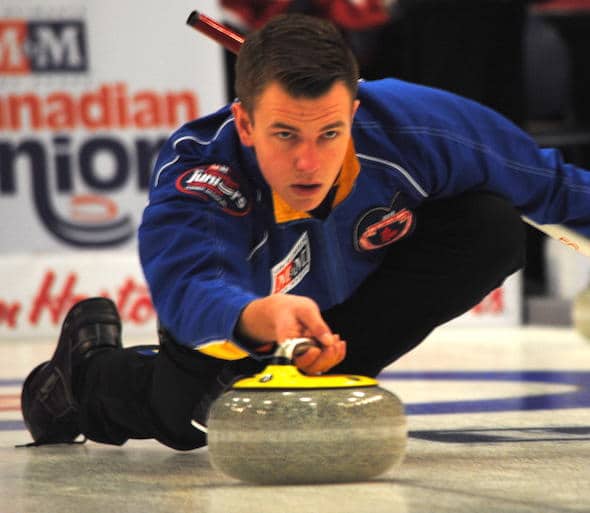 The 18-year-old University of Alberta student, who’s carrying a grade-point average “pretty near” to a perfect 4.0, is doing a unit on poetry, focusing this particular week on Shakespearean sonnets. Also, in his biology course, Sturmay is studying genes and alleles, and their various possible mutations. Oh yes. He’s trying to win a gold medal at the 2015 M&M Meat Shops Canadian Junior Curling Championships, and like his schooling, is pretty near perfect in that department, too. Sturmay’s Alberta foursome from Edmonton — third Tristan Steinke, second Brett Winfield, lead Mac Lenton, coach Jeff Ginter — improved to 4-0 on Monday at the Corner Brook Civic Centre with a tidy 4-2 win over Prince Edward Island’s Tyler Smith (Montague, 1-3) to maintain control of Pool B in the 14-team men’s competition. “We had a high expectation coming in; we knew the competition, and we knew it would be fairly close,” said Sturmay, who leads all skips with an 85 per cent cumulative shooting percentage (next closest is Quebec’s Félix Asselin at 79). “The guys are playing well out there, and it’s beautiful ice — it’s easy to make shots out there.” The journey to Corner Brook wasn’t easy for the Alberta team; Sturmay and and Lenton lost the 2013 Alberta junior final to Thomas Scoffin, while Steinke and Winfield dropped the final the year before to Brendan Bottcher. “We knew that if we got here, we’d have a fighting chance,” said Sturmay, who credits the tough competition on the Alberta Junior Curling Tour as a reason for his team’s success. “But it was so big to get over that hump (and win the Alberta junior title). So big. Very emotional, to finally see those seasons of hard work pay off.” And the hard work is continuing in Corner Brook, on and off the ice. “It’s tough being a student-athlete; I had to miss a week of school for provincials, and I’m missing a week and half for here, so I had to drop my course load a little bit,” he said. “But it really helps when your professors are so accommodating and understanding.” In men’s Pool A play, meanwhile, defending champ Braden Calvert of Manitoba (Winnipeg) and B.C.’s Paul Henderson (Victoria) picked up wins to improve to 3-1, behind the idle Quebec team (4-0). Manitoba was a 21-3 winner over Nunavut’s Kane Komaksiutiksak (Rankin Inlet, 0-3), while B.C. held off Newfoundland/Labrador’s Greg Smith (Stephenville; 1-3) 8-6. 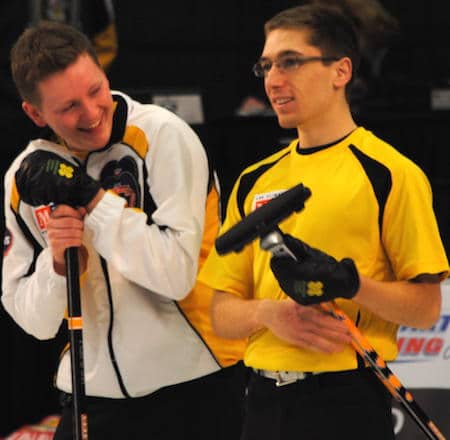 In the other men’s game, Ontario’s Mac Calwell (Belleville) improved to 2-2 with an 11-6 win over Nova Scotia’s Matthew Manuel (Halifax; 1-3). In women’s Pool A play, meanwhile, defending Canadian and world junior women’s champ Kelsey Rocque (Edmonton) improved to 4-0 with a 15-3 win over Nunavut’s Sadie Pinksen (Iqaluit; 0-4). Quebec’s Émilia Gagné (Jonquiére/Alma), meanwhile, moved into a second-place tie with idle Chelsea Brandwood of Ontario at 3-1 with a 7-3 triumph over Northern Ontario’s Krysta Burns (Sudbury; 1-3). In the lone Pool B game, Nova Scotia’s Mary Fay (Chester) evened her record at 2-2 with an 11-3 win over Newfoundland/Labrador’s Sarah Hill (St. John’s; 0-4). Action at the 2015 M&M Meat Shops Canadian Juniors continues on Monday with draws at 10 a.m., 2:30 p.m. and 7 p.m. (All times NST; EST plus 90 minutes). Round-robin games are taking place at both the Corner Brook Civic Centre and the Corner Brook Curling Club. The top three teams in each pool, plus two teams with the next best won-lost records, then advance to the Championship Round for a further four-game partial round robin from Wednesday through Friday, with their earlier records carried forward. Upon completion of the Championship Round, the top team of each gender advances to its respective final, while the second- and third-place finishers meet in a semifinal to determine the other finalist. Meanwhile, the six teams of each gender that don’t qualify for the Championship Round meet in a Seeding Round to determine ranking for the 2016 Canadian Juniors in Stratford, Ont. All members of the non-playoff teams will then compete in a Mixed Doubles competition on Saturday and Sunday. Once the top three teams for each gender have been determined, all playoff games will be played at the Civic Centre. The men’s and women’s playoffs will be televised by the TSN network as well as RDS2 (French). The women’s semifinal is scheduled for Saturday, Jan. 31, at 1:30 p.m. NST/noon EST, with the gold-medal game at 8 p.m. NST/6:30 p.m. EST. This story will be posted in French as soon as possible at https://www.curling.ca/2015juniors-fr/ The full scoreboard can be viewed at https://www.curling.ca/scoreboard/