Saskatchewan skip’s thoughts with sister at home in Saskatoon

It only counted as one win in the standings, but if you ask Kristen Streifel, she had two major victories on Monday at the 2015 M&M Meat Shops Canadian Junior Curling Championships. 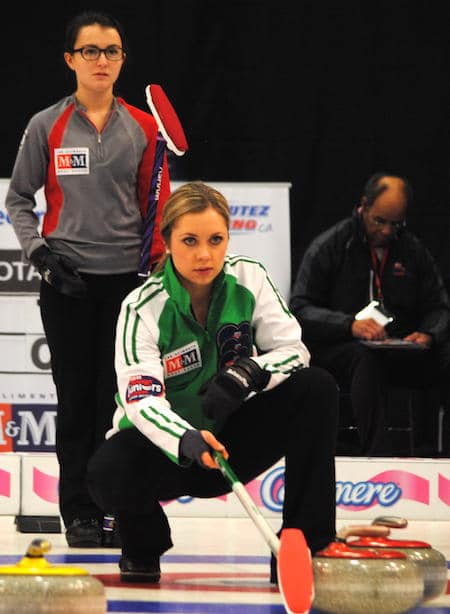 On the ice, Streifel’s team from Saskatoon — third Karlee Korchinski, second Hayley Unrau, lead Haylee Jamieson, coach Dean Kleiter — improved to 4-1 in Pool B with a 12-3 win over Carina McKay-Saturnino of the Northwest Territories (Inuvik; 1-3), temporarily tying the Prairie team with B.C.’s Corryn Brown (Kamloops; 4-0) for top spot in the seven-team pool. Off the ice? Well, that was undoubtedly the bigger victory for Streifel, 19. Moments after stepping off the ice, she phoned home to Saskatoon to talk to her mom and heard the news that her older sister Chelsey had been released from hospital at roughly the same time her game ended — just 11 days after undergoing surgery to remove a non-cancerous brain tumour. “It was a victory for both sisters today,” said an ecstatic Streifel, who’s competing in her third M&M Meat Shops Canadian Juniors. “Chelsey is definitely my inspiration this week. The way I’m competing this week, it’s because I’m so motivated by her. She’s really changed who I am as a person and made me realize that you have to appreciate the small things in life.” Chelsey, 26, a former provincial junior runner-up in Saskatoon, was diagnosed with the tumour in early December upon returning home from an extended vacation with her husband. Kristen and her team competed in the Saskatchewan junior championship a week or so before Chelsey was to undergo the operation. “Oh, it was a very difficult time,” said Streifel. “Once I was on the ice, it was easy to focus on the game at hand. But off the ice? It really sets your priorities straight and makes you realize what’s important. Family was definitely on my mind most of the time.” The 11-hour operation and Chelsey’s ensuing recovery meant that their mom, Tracy — Kristen’s longtime coach — wouldn’t make the trip to Corner Brook with Team Saskatchewan. “It was a hard decision to not have my mom here, but she knew she needed to be at home taking care of Chelsey,” said Kristen, who has curled league games with her mom and sister over the years. “We all understood that, and I’ve been Facetiming with both of them as much as I can. I’m really missing my sister this week and it’s hard to be here competing while she’s going through her recovery but I know this is what she wants for me. She’s such a positive person, and I think that’s really rubbed off on a lot of people. It’s amazing what the power of the mind can do. She was so positive leading up to the surgery and she got through it just as well as she could have.” In other women’s games on Monday, Alberta’s Kelsey Rocque (Edmonton) won her fifth straight game, taking two in the 10th end for a 7-6 win over Quebec’s Émilia Gagné (Jonquiére/Alma; 3-2); Northern Ontario’s Krysta Burns (Sudbury; 2-3) turned back Nunavut’s Sadie Pinksen (Iqaluit; 0-5) 12-3; and Ontario’s Chelsea Brandwood (Hamilton; 4-1) downed the Yukon’s Bailey Horte (Whitehorse; 1-4) 10-7. In men’s play, Saskatchewan’s Jacob Hersikorn (Saskatoon; 4-1) pulled into a tie for first place in Pool B with idle Karsten Sturmay (Edmonton; 4-0) with a 13-6 win over the Northwest Territories’ Matthew Miller (Inuvik; 0-4); and the Yukon’s Joe Wallingham (Whitehorse; 2-3) shaded Northern Ontario’s Tanner Horgan (Sudbury; 1-3) 6-5. Action at the 2015 M&M Meat Shops Canadian Juniors continues on Monday with the day’s final draw at 7 p.m. (All times NST; EST plus 90 minutes). 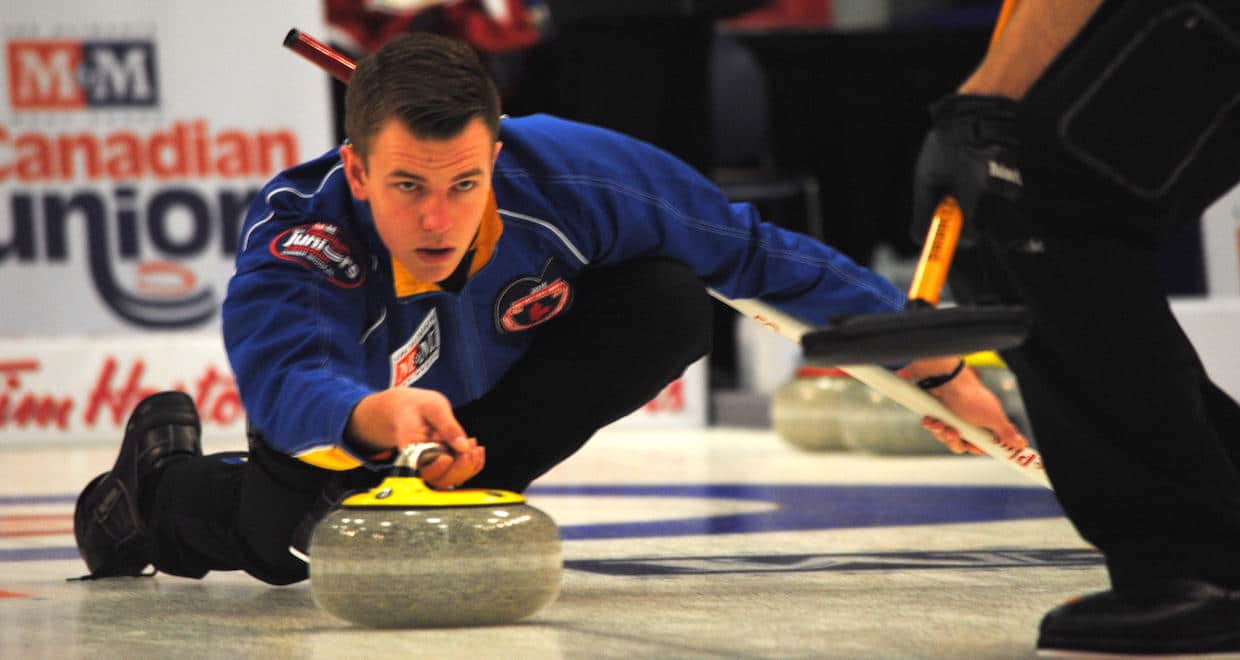 Round-robin games are taking place at both the Corner Brook Civic Centre and the Corner Brook Curling Club. The top three teams in each pool, plus two teams with the next best won-lost records, then advance to the Championship Round for a further four-game partial round robin from Wednesday through Friday, with their earlier records carried forward. Upon completion of the Championship Round, the top team of each gender advances to its respective final, while the second- and third-place finishers meet in a semifinal to determine the other finalist. Meanwhile, the six teams of each gender that don’t qualify for the Championship Round meet in a Seeding Round to determine ranking for the 2016 Canadian Juniors in Stratford, Ont. All members of the non-playoff teams will then compete in a Mixed Doubles competition on Saturday and Sunday. All playoff games will be played at the Civic Centre. The men’s and women’s playoffs will be televised by the TSN network as well as RDS2 (French). The women’s semifinal is scheduled for Saturday, Jan. 31, at 1:30 p.m. NST/noon EST, with the gold-medal game at 8 p.m. NST/6:30 p.m. EST. This story will be posted in French as soon as possible at https://www.curling.ca/2015juniors-fr/ The full scoreboard can be viewed at https://www.curling.ca/scoreboard/