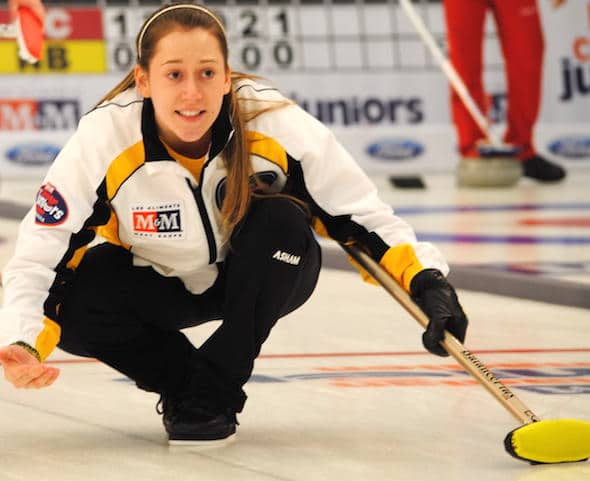 That was borne out emphatically on Wednesday morning at the Corner Brook Civic Centre as Championship Round play got underway with a pair of impressive comebacks. On the men’s side, New Brunswick’s Rene Comeau (Fredericton; 6-1) rallied from 6-2 deficit through six ends to defeat Quebec’s previously unbeaten Félix Asselin (Montreal; 6-1) 8-6. And on the women’s side, Manitoba’s Beth Peterson (Winnipeg; 4-3) turned a 7-3 deficit against New Brunswick’s Justine Comeau (Fredericton; 3-4) into a 10-7 victory. The New Brunswick men — Comeau was the silver-medallist at the 2014 M&M Meat Shops Canadian Juniors — started their comeback with two in the seventh end and a steal of one in the ninth, and nailed down the win by stealing three in the 10th when Asselin wrecked on a guard. “It was a huge win,” said Comeau, who’s backed up by third Andrew Burgess, second Alex MacNeil, lead Ryan Freeze and coach Damien Lahiton. “We got down early but we just kept fighting out there. They were making some great shots early on, but we knew we weren’t playing that bad; we just had to keep grinding. “It was definitely a little frustrating; I’m not gonna lie. But we tried to stay positive. We’ve been fighting back a lot this year; at provincials, we were down 8-4 in the eighth end of a sudden-death game and we somehow found a way. So it worked out for us again today.” In the other men’s Championship Round game, reigning gold-medallist Braden Calvert of Manitoba (Winnipeg; 6-1) doubled Saskatchewan’s Jacob Hersikorn (Saskatoon; 5-2) 6-3. Meanwhile, the final two of eight qualifiers for the Championship round were decided from a pair of tiebreakers. In one, Ontario’s Mac Calwell (Belleville) beat Nova Scotia’s Matthew Manuel (Halifax) 6-4, while in the other, Northern Ontario’s Tanner Horgan (Sudbury) scored four in the 11th end for a 9-5 win over Prince Edward Island’s Tyler Smith (Montague). 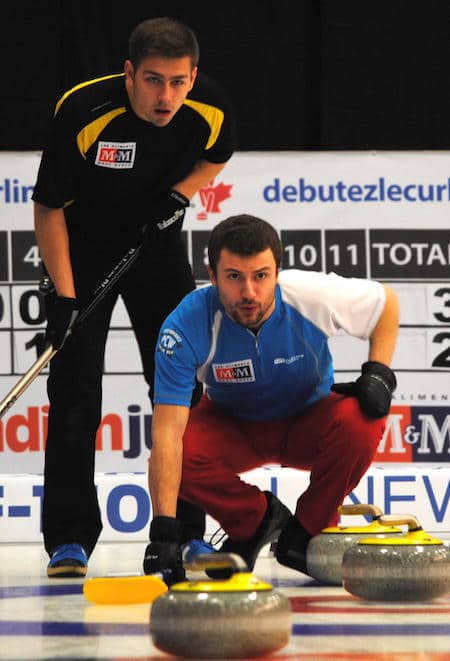 The top three teams in each preliminary pool, plus two teams with the next best won-lost records, advanced to the Championship Round for a further four-game partial round robin from Wednesday through Friday, with their earlier records carried forward. Meanwhile, the six teams of each gender that didn’t qualify for the Championship Round are meeting in a Seeding Round to determine ranking for the 2016 Canadian Juniors in Stratford, Ont. On the women’s side, the Manitobans — Peterson’s team is rounded out by third Robyn Njegovan, second Melissa Gordon, lead Breanne Yozenko and coach Jack Gordon — got their own comeback started with a three in the seventh end, and followed up with steals of one, two and one to complete the victory. “We have to figure out what we’re doing in the first five ends,” said Peterson with a laugh. “We need to figure out how to wake up in morning games. But that was a really big win. We had a rough end to the preliminary round (losing 8-3 to Ontario’s Chelsea Brandwood), so that was a good start to the championship round, for sure.” In other women’s Championship Round games, defending world champion Kelsey Rocque of Alberta (Edmonton; 7-0) kept her perfect record alive with a 9-4 win over Saskatchewan’s Kristen Streifel (Saskatoon; 4-3); and 2013 Canadian champion (and winner of a 2014 For The Love of Curling scholarship) Corryn Brown (Kamloops) also stretched her win streak to seven with a tight 5-4 win over Quebec’s Émilia Gagné (Jonquiére/Alma; 4-3). Action at the 2015 M&M Meat Shops Canadian Juniors continues on Wednesday with Championship and Seeding Round draws at 2:30 p.m. and 7 p.m. (all times NST; EST plus 90 minutes). Round-robin games are taking place at both the Corner Brook Civic Centre and the Corner Brook Curling Club. Upon completion of the Championship Round, the top team of each gender advances to its respective final, while the second- and third-place finishers meet in a semifinal to determine the other finalist. All members of the non-playoff teams will compete in a Mixed Doubles competition on Saturday and Sunday. All playoff games will be played at the Civic Centre. The men’s and women’s playoffs will be televised by the TSN network as well as RDS2 (French). The women’s semifinal is scheduled for Saturday, Jan. 31, at 1:30 p.m. NST/noon EST, with the gold-medal game at 8 p.m. NST/6:30 p.m. EST. This story will be posted in French as soon as possible at https://www.curling.ca/2015juniors-fr/ The full scoreboard can be viewed at https://www.curling.ca/scoreboard/