CORNER BROOK, N.L. — Braden Calvert was offered a ready-made excuse. The defending champ was having nothing to do with it. 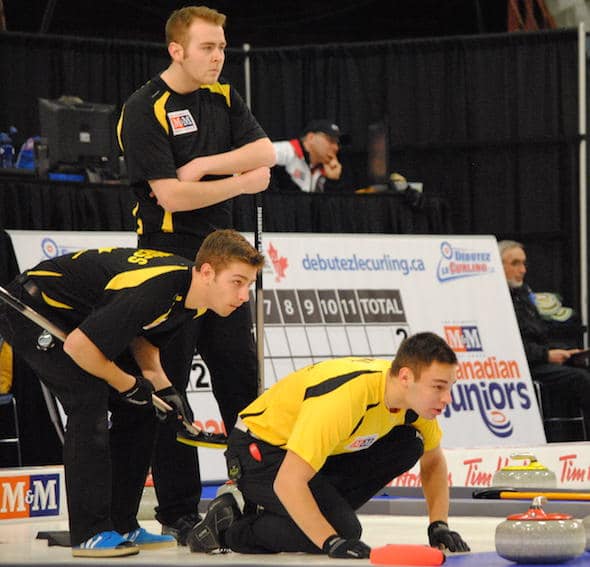 Having given up a steal of one to New Brunswick’s Rene Comeau in the fifth end when his last-rock hit attempt to score three overcurled on Wednesday night at the Corner Brook Civic Centre, it was suggested to the Manitoba skip, and defending men’s champion at the M&M Meat Shops Canadian Junior Curling Championships, that his last rock had perhaps caught some debris, resulting in the miss. “Oh, it didn’t,” replied Calvert with a wry chuckle. “I broke my wrist on that one. Just a little soft (release, resulting in more curl) — once it goes over the centre line, you can kiss it goodbye. And the timing at the fifth-end break was definitely not good.” But instead of dwelling on the miss, which gave New Brunswick a 3-1 lead, Calvert’s Manitoba squad from Winnipeg — third Kyle Kurz, second Lucas Van Den Bosch and lead Brendan Wilson — listened to some coaching wisdom from coach Tom Clasper. “It was good that Tom was able to come out and help us refocus,” said Calvert. “He said, just get a deuce here and it’ll all erase itself.” Which is pretty much what happened. Calvert, who finished the game shooting 89 per cent, tapped for a game-tying deuce in the sixth, stole one more in the seventh and finished off with a 10th-end deuce for a 6-4 win over New Brunswick in a rematch of the 2014 gold-medal game at Liverpool, N.S. “They had all the momentum after the steal and we kind of got it back again right away,” said Calvert, whose team moved into sole possession of first place in the eight-team Championship Round with a 7-1 record; New Brunswick dropped to 6-2. “We’re playing pretty well right now and hopefully we can keep that up tomorrow.” 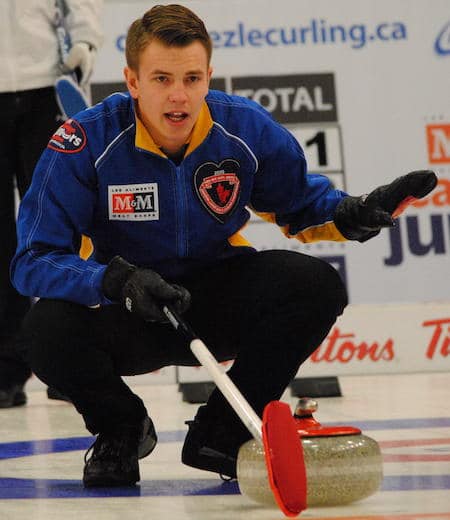 Comeau said the priority for his Fredericton squad is to leave Wednesday’s disappointing loss behind. “It was definitely a tough one to lose, but we’re still at 6-and-2 so we just have to rebound, refocus and get ready for our next two games today,” said Comeau. “We know we can hang with them. But we just have to refocus, forget about it and hope that we can meet them again in the playoffs. Short-term memory loss is key. That’s what we’ll try to do and hopefully we come out firing tomorrow.” In other men’s Championship Round play, Tanner Horgan’s Sudbury team prevailed in the Battle of Ontario, as Northern Ontario cruised to a 10-4 win over Ontario’s Mac Calwell (Belleville; 2-5). Horgan stole deuces in the first and eighth ends in the victory to improve to 3-4. Also, Alberta’s Karsten Sturmay (Edmonton; 6-1) stole a single point in the seventh end, and deuces in the eighth and ninth ends for an 8-3 triumph over B.C.’s Paul Henderson (Victoria; 5-3). In men’s Seeding Round play, Nova Scotia’s Matthew Manuel (Halifax; 3-5) scored an 11th-end deuce for an 8-6 win over the Yukon’s Joe Wallingham (Whitehorse; 2-6). On the women’s side, 2014 bronze-medallist Mary Fay of Nova Scotia (Chester) won her Championship Round opener, improving to 5-2 with a 9-6 win over Quebec’s Émilia Gagné (Jonquiére/Alma; 4-4). The Bluenosers broke the game open with a stolen deuce in the fifth end, and a score of three in the seventh. In the women’s Seeding Round, Prince Edward Island’s Veronica Smith (Cornwall; 4-4) scored one in the 11th end for a 6-5 triumph over Northern Ontario’s Krysta Burns (Sudbury; 3-5); while the Yukon’s Bailey Horte (Whitehorse; 3-5) knocked off Newfoundland/Labrador’s Sarah Hill (St. John’s; 1-7) 9-7. Action at the 2015 M&M Meat Shops Canadian Juniors continues on Thursday with draws at 10 a.m., 2:30 p.m. and 7 p.m. (all times NST; EST plus 90 minutes). Round-robin games are taking place at both the Corner Brook Civic Centre and the Corner Brook Curling Club. Upon completion of the Championship Round, the top team of each gender advances to its respective final, while the second- and third-place finishers meet in a semifinal to determine the other finalist. All members of the non-playoff teams will compete in a Mixed Doubles competition on Saturday and Sunday. All playoff games will be played at the Civic Centre. The men’s and women’s playoffs will be televised by the TSN network as well as RDS2 (French). The women’s semifinal is scheduled for Saturday, Jan. 31, at 1:30 p.m. NST/noon EST, with the gold-medal game at 8 p.m. NST/6:30 p.m. EST. This story will be posted in French as soon as possible at https://www.curling.ca/2015juniors-fr/ The full scoreboard can be viewed at https://www.curling.ca/scoreboard/