Understand, Streifel and her Saskatchewan teammates have been eating parent-cooked salmon most nights here during the 2015 M&M Meat Shops Canadian Junior Curling Championships. But coming on the heels of a stunning 10-8 win over Ontario’s Chelsea Brandwood Wednesday afternoon at the Corner Brook Civic Centre and having the bye on Wednesday night, this particular main course will be more satisfying than usual. “It’s going to taste REAL good,” said Streifel with a smile. There was the potential for a bitter-tasting dinner based on the way the first nine ends transpired during this Championship Round game; Brandwood’s Ontario team from Hamilton (5-2 with the loss) had led all the way, and was up 8-6 in the 10th and not in real danger of losing. That is, until back-to-back misses by Ontario third Claire Greenlees and Brandwood left Saskatchewan sitting four. And when Brandwood was short on her final draw, Streifel didn’t need to throw her last rock — the out-of-nowhere win was already in the bank. “I don’t know; we just waited until we had a chance at at a big end there, and I guess it came at the very end,” said Streifel, whose Saskatoon team — third Karlee Korchinski, second Hayley Unrau, lead Haylee Jemson, coach Dean Kleiter — improved to 5-3 with the win. “Timing is everything.” The win helped erase some of the sting of a 9-4 loss to Alberta’s Kelsey Rocque (Edmonton; 7-0) earlier in the day, and kept Saskatchewan’s hopes for a playoff berth alive. “Coming into today, we were kind of playing each game as a playoff game because when you’re in the Championship pool, every game is very important,” said Streifel. “We knew we wouldn’t be able to lose this game; it’s kind of all or nothing now. I think we showed a lot of character in that game because we were able to stay calm, stay focused and stay in it and take baby steps all the way to the 10th end.” In the other women’s Championship Round game, 2013 champion B.C.’s Corryn Brown (Kamloops; 7-1) suffered her first loss, bowing 7-3 to Manitoba’s Beth Peterson (Winnipeg; 5-3). In men’s Championship Round action, B.C.’s Paul Henderson (Victoria; 5-2) rolled to a 9-3 win over Saskatchewan’s Jacob Hersikorn (Saskatoon; 5-3). Women’s Seeding Round games (to determine the pools for the 2016 Canadian Juniors in Stratford, Ont.) featured the Northwest Territories’ Carina McKay-Saturnino (Inuvik; 2-6) beating Nunavut’s Sadie Pinksen (Iqaluit; 0-8) 12-5; and Northern Ontario’s Krysta Burns (Sudbury; 3-4) was an 11-8 victor over Newfoundland/Labrador’s Sarah Hill (St. John’s; 1-6). 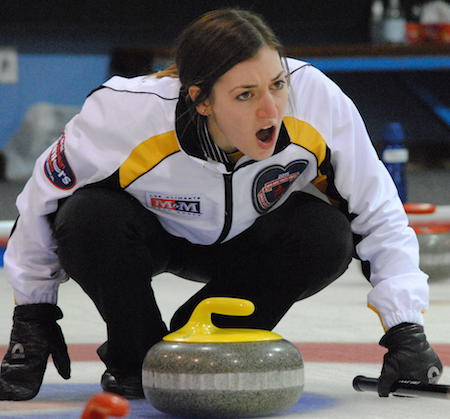 In men’s Seeding Round action, P.E.I.’s Tyler Smith (Montague; 3-4) topped Nova Scotia’s Matthew Manuel (Halifax; 2-5); Matthew Miller of the Northwest Territories turned back Nunavut’s Kane Komaksiutiksak (Rankin Inlet; 0-7) 11-2; and Newfoundland/Labrador’s Greg Smith (Stephenville; 3-4) took an extra end to beat the Yukon’s Joe Wallingham (Whitehorse; 2-5) 9-8. Action at the 2015 M&M Meat Shops Canadian Juniors continues on Wednesday with the day’s final draw, at 7 p.m. (all times NST; EST plus 90 minutes). Round-robin games are taking place at both the Corner Brook Civic Centre and the Corner Brook Curling Club. Upon completion of the Championship Round, the top team of each gender advances to its respective final, while the second- and third-place finishers meet in a semifinal to determine the other finalist. All members of the non-playoff teams will compete in a Mixed Doubles competition on Saturday and Sunday. All playoff games will be played at the Civic Centre. The men’s and women’s playoffs will be televised by the TSN network as well as RDS2 (French). The women’s semifinal is scheduled for Saturday, Jan. 31, at 1:30 p.m. NST/noon EST, with the gold-medal game at 8 p.m. NST/6:30 p.m. EST. This story will be posted in French as soon as possible at https://www.curling.ca/2015juniors-fr/ The full scoreboard can be viewed at https://www.curling.ca/scoreboard/