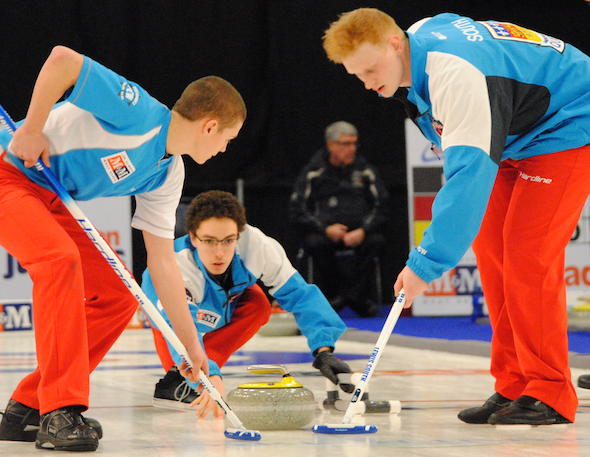 After racing to six straight wins to open the men’s competition, Félix Asselin’s team from Montreal — third Alex Cormier, second Lewis South, lead Émile Asselin and coach Benoit Forget — drifted off-route, losing a pair of games to suddenly put its hopes for one of the three available playoff berths at risk, with a showdown looming against Karsten Sturmay’s red-hot Alberta team next on the docket. But the Quebec team — seeking that province’s first national junior men’s title since William Dion’s triumph in 2008 — responded magnificently, eking out a tight 2-0 win over Alberta to leave the teams in a three-way logjam at 7-2 in the men’s Championship Round with New Brunswick’s Rene Comeau, behind only the 7-1 record of defending champion Braden Calvert of Manitoba. “We had a little chat after our first game today,” said Félix Asselin, referring to a 12-5 loss earlier on Thursday to Saskatchewan’s Jacob Hersikorn. “Things were’t really going our way, and we were missing tons of shots on the bad side, so we really had a big discussion about it, and we got focused. We knew we only had two losses and we still had a chance, and we were able to pull it off.” The game opened with seven blank ends — seven entertaining blank ends, truthfully, with plenty of rocks in play and some big shots late in the ends. 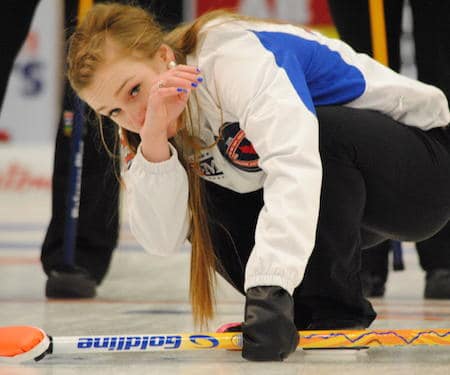 Asselin opened the scoring in the eighth, drawing the four-foot to looking at two Alberta counters, then stole his insurance point in the eighth when Sturmay was wide on his hit attempt to complete a satisfying victory. “Oh, especially with the fact that we were playing not to our capacity the last two games,” said Asselin, who fired a 93 per cent game at Alberta. “It’s fun to have a good solid team game where every player wasn’t struggling. It’s a big confidence booster.” In other, men’s Championship Round play, New Brunswick (Fredericton) shaded Ontario’s Mac Calwell (Belleville; 2-7) 6-5; and Northern Ontario’s Tanner Horgan (Sudbury; 4-4) was an 8-2 winner over B.C.’s Paul Henderson (Victoria; 5-4). 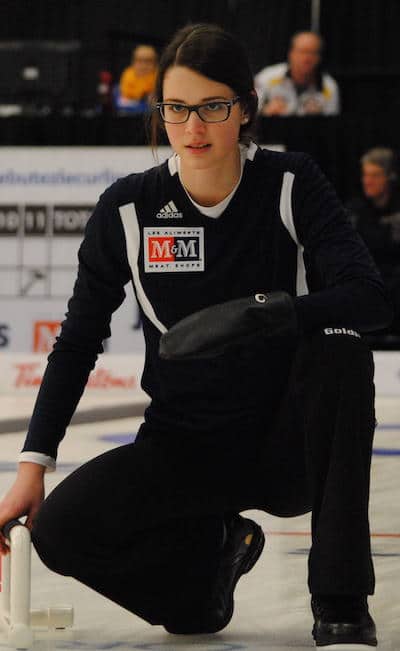 In men’s Seeding Round play to determine the pools for the 2016 Canadian Juniors in Stratford, Ont., the Yukon’s Joe Wallingham (Whitehorse; 3-6) topped Nunavut’s Kane Komaksiutiksak (Rankin Inlet; 0-8) 7-3; and the Northwest Territories’ Matthew Miller (Yellowknife; 2-6) shaded Greg Smith of Newfoundland/Labrador (Stephenville; 3-5) 9-8. In women’s play, meanwhile, reigning world champion Kelsey Rocque of Alberta (Edmonton) remained the lone unbeaten team in Corner Brook with a 5-4 win over 2013 Canadian champ Corryn Brown of B.C. (Kamloops; 7-3). “This is definitely exceeding my expectations,” said Rocque. “To be 8-and-0 at this point? You can’t ask for anything better, with a new team (her 2014 team aged out). This is amazing. B.C. is a great team and they showed it. A little bit of a greasy win for us, but we’ll take it. You take them as they come, definitely.” In the other women’s game, Nova Scotia’s Mary Fay (Chester), a bronze-medallist last year in Liverpool, N.S., won her sixth straight game, beating Manitoba’s Beth Peterson (Winnipeg; 6-4) 8-3. It’s been a terrific turnaround for the Bluenosers, who lost their first two here. “We had a rough start, but we’ve been able to come back,” said Fay, whose 6-2 team is tied for second place with Ontario’s Chelsea Brandwood (Hamilton). “I think we’ve just relaxed more, and gotten into a groove, gotten used to the ice, which has helped us a lot. We’re building on each game and really having a lot of fun.” Action at the 2015 M&M Meat Shops Canadian Juniors continues on Thursday with the day’s final draw 7 p.m. (all times NST; EST plus 90 minutes). Round-robin games are taking place at both the Corner Brook Civic Centre and the Corner Brook Curling Club. Upon completion of the Championship Round, the top team of each gender advances to its respective final, while the second- and third-place finishers meet in a semifinal to determine the other finalist. All members of the non-playoff teams will compete in a Mixed Doubles competition on Saturday and Sunday. All playoff games will be played at the Civic Centre. The men’s and women’s playoffs will be televised by the TSN network as well as RDS2 (French). The women’s semifinal is scheduled for Saturday, Jan. 31, at 1:30 p.m. NST/noon EST, with the gold-medal game at 8 p.m. NST/6:30 p.m. EST. This story will be posted in French as soon as possible at https://www.curling.ca/2015juniors-fr/ The full scoreboard can be viewed at https://www.curling.ca/scoreboard/