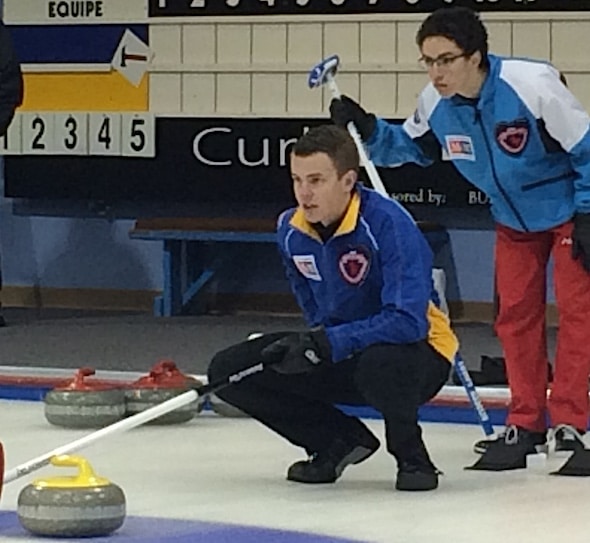 A few hours earlier, by his own admission, the 20-year-old student at Collège Gérald-Godin in Montreal had, essentially, sleepwalked his way through a disappointing 6-4 loss to Northern Ontario’s Tanner Horgan to close out men’s round-robin play at the 2015 M&M Meat Shops Canadian Juniors. Asselin shot a paltry 41 per cent, and the loss dropped his Quebec team into three-team tiebreaker for the third and final playoff berth. But Asselin’s alarm apparently went off over the lunch hour, because it was his clutch shot in the seventh end — a delicate hack-weight double-takeout to score two — that made the biggest difference in his Quebec team prevailing 5-3 over Alberta’s Karsten Sturmay (Edmonton) in the first-round tiebreaker. 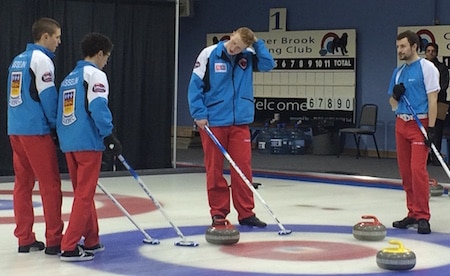 With the win, Asselin, third Alex Cormier, second Lewis South, lead Émile Asselin and coach Benoit Forget advance to the final tiebreaker, Saturday at 1:30 p.m. (all times NST; EST plus 90 minutes), against Saskatchewan’s Jacob Hersikorn (Saskatoon), with the winner moving on to Sunday’s 1:30 p.m. semifinal on TSN/RDS2 against New Brunswick’s Rene Comeau (Fredericton). “I really had a hard time this morning; it was early and I was almost asleep,” said Félix Asselin. “I was missing many, many draws, and I made sure to have a good preparation for this game. We had a lot less misses and we played more as a team.” Ironically, the game’s pivotal shot — that lovely double in the seventh — was all Asselin, as not a single lick of sweeping was applied as his outturn just curled enough to make enough contact with both rocks to score two “I figured if we were going to win this game, we could probably take a pretty big step right there,” he said with a smile. “I wasn’t really drawing well, so figured my chances were better with the hit and the stakes were bigger. It just curled enough; no sweepers or anything. My biggest shot of the week? My last rock against Alberta (in the round robin) was a runback double, which was pretty nice, also. But the stakes in this game were bigger, so I guess that makes it a bigger shot.” So, Quebec lives to fight another day, and feeling awfully good after the tiebreaker win to erase the taste of the loss to Northern Ontario to open the day. 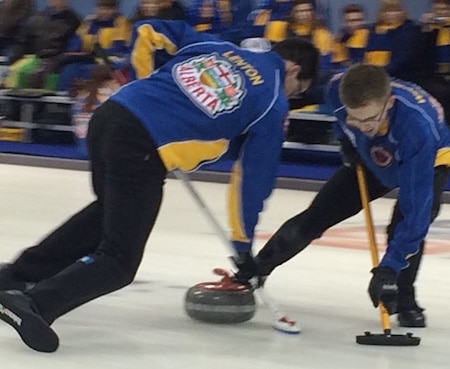 Alberta’s Mac Lenton, left, and Brett Winfield lean into their sweeping on Friday.

“It was great to bounce back, for sure,” said Cormier. “It was a confidence builder for everyone on the team, actually. Not everyone was on this morning, so it was great to come back against an awesome team. It was pretty crushing, actually, to hear we were in the tiebreaker against Alberta and Saskatchewan, two great teams. But we’re halfway there now. We’ve got nothing to lose now.” Awaiting the men’s semifinal winner will be defending champion Braden Calvert of Manitoba, who’s seeking to become the first repeat winner in event history to have the same four players for both victories. In the final men’s Seeding Round games to determine the final rankings and pools for the 2016 Canadian Juniors in Stratford, Ont., Nova Scotia’s Matthew Manuel (Halifax; 4-5) downed Matthew Miller of the Northwest Territories (Inuvik; 2-7) 9-3; and Prince Edward Island’s Tyler Smith (Montague; 5-4) turned back Nunavut’s Kane Komaksiutiksak (Rankin Inlet; 0-9) 14-3. In the women’s Seeding Round finales, Carina McKay-Saturnino of the Northwest Territories (Inuvik; 3-6) shaded Northern Ontario’s Krysta Burns (Sudbury; 3-6) 8-7; Prince Edward Island’s Veronica Smith (Cornwall; 5-4) beat the Yukon’s Bailey Horte (Whitehorse; 3-6) 7-5; and Newfoundland/Labrador’s Sarah Hill (St. John’s; 2-7) prevailed 9-3 over Nunavut’s Sadie Pinksen (Iqaluit; 0-9) 9-3. The women’s playoff picture: defending world champ Kelsey Rocque (Edmonton; 9-1) is through to Saturday’s 8 p.m. final on TSN/RDS2, while 2013 champion Corryn Brown of B.C. (Kamloops; 7-3) will play Ontario’s Chelsea Brandwood (Hamilton; 7-3) in the semifinal Saturday at 1:30 p.m. on TSN/RDS2. All members of the non-playoff teams will compete in a Mixed Doubles competition on Saturday and Sunday. This story will be posted in French as soon as possible at https://www.curling.ca/2015juniors-fr/ The full scoreboard can be viewed at https://www.curling.ca/scoreboard/