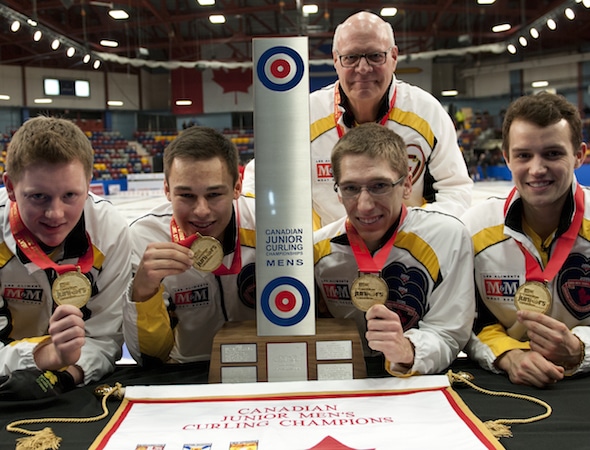 The mad dash back to Winnipeg will begin at approximately 2:15 a.m. local time in Corner Brook Monday as the team catches the bus to the airport in Deer Lake — approximately three hours after finishing off its 8-6 gold-medal game victory over Saskatchewan’s Jacob Hersikorn at the Corner Brook Civic Centre. Two flights later, the team is scheduled to land in Winnipeg to an undoubtedly memorable airport reception with friends, family and local media.

And then, Tuesday, it’s off to Brandon for practice day at the Manitoba men’s championship in preparation for Wednesday’s first-round game against East St. Paul’s Evan Martin. So much for a week-long celebration. “I’m in a little bit of shock right now,” marvelled Calvert, a 19-year-old University of Manitoba student. “We’re just overwhelmed and super-excited about winning the national championship, and I’m sure it’ll sink in a little bit more tomorrow.” Sunday’s win — marking Manitoba’s third straight M&M Meat Shops Canadian Juniors men’s gold medal, after Calvert’s victory last year in Liverpool, N.S., and Matt Dunstone’s win the year before in Fort McMurray, Alta. — capped a brilliant week for Calvert, third Kyle Kurz, second Lucas Van Den Bosch, lead Brendan Wilson and coach Tom Clasper. After losing their opener to Quebec’s Félix Asselin, the Manitobans rattled off 10 straight victories en route to gold. In the final, Manitoba never trailed, taking single points in the first two ends, one more in the third and a beautiful chap-and-lie deuce in the sixth to go up 5-2. “It wasn’t an easy shot, and definitely wasn’t easy to look at from the hack,” said an admiring Kurz of the sixth-end masterpiece. “You couldn’t see the inside of it, and if it’s heavy at all, it’s hanging outside and we’re not getting our deuce. But I had full confidence in him making that shot; he makes those left, right and centre.” Saskatchewan would bounce back with deuces in the seventh and ninth ends, sandwiched around a Manitoba single to tie the game. In the 10th, though, Hersikorn’s last-rock draw attempt came up short and Calvert didn’t need to throw his last rock. 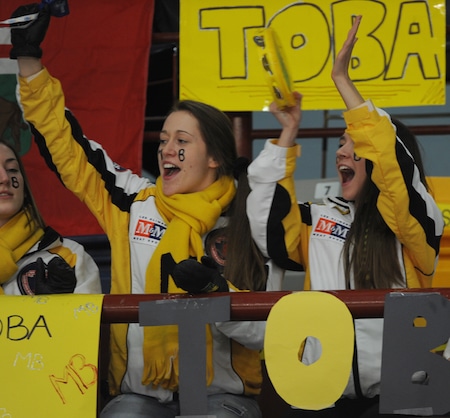 “I think being here once and doing it once definitely helped us focus on what we had to do and helped us handle the nerves a bit better,” said Calvert. “I thought we were a lot more comfortable this year.” It was an all-around good week for the team; back at the Calvert family cattle ranch in Carberry, it was calving season. Braden’s older brother Trevor handled one of those births, and immediately named the newborn Tommy in honour of the team coach. While that aspiring bull is taking its first tottering steps, the Calvert team will have aspirations of its own at the Manitoba men’s championship. “It’s pretty neat to go to an event where you have Jeff Stoughton, Mike McEwen and Reid Carruthers at it, guys you’ve watched on TV and idolized for years,” he said. “It’s amazing to know that we’ll have a chance to play them. We’ll have a lot of fun at that event.” Once the Manitoba championship is done, Calvert will turn his attention to wearing the Maple Leaf at the 2015 World Junior Championships, beginning Feb. 28 in Tallinn, Estonia. Last year in Flims, Switzerland, the Canadian team lost the bronze-medal game to Norway. “We can’t await to put the Maple Leaf on and try to do Camada proud, and hopefully do a little bit better than last year. This story will be posted in French as soon as possible at https://www.curling.ca/2015juniors-fr/