GRANADA, Spain (CIS) – Breanne Meakin, a rising star in women’s curling, was announced Tuesday as Canada’s flag bearer for the opening ceremony of the 2015 Winter Universiade in Granada, Spain. 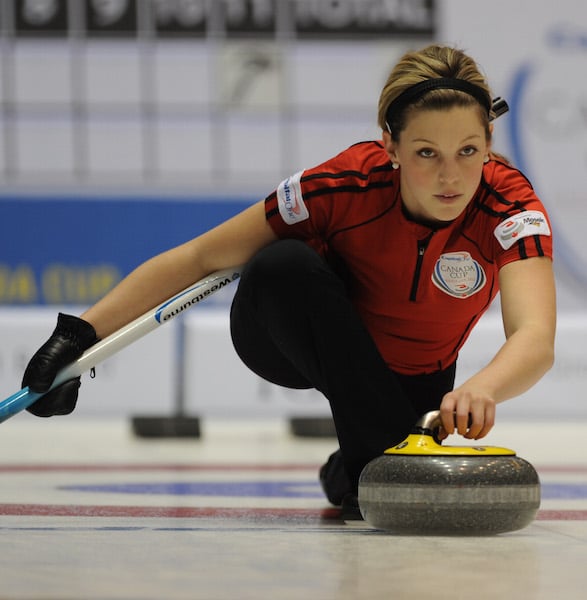 Canadian chef de mission Darren Cates and Ms. Carla Goncalves, Consular Program Officer, Embassy of Canada, Spain, made the announcement and officially welcomed the red and white delegation at a reception held at the Hotel Carmen. The opening ceremony of the 27th winter world university games is set for Wednesday at Palacio de Exposiciones y Congresos de Granada, starting at 6 p.m. local (noon EST). Over 1,200 participants from 41 countries, including 82 Canadian student-athletes, are attending the biennial multi-sport competition. Meakin’s appointment marks the second consecutive Winter Universiade where a curling skip has been named the Canadian flag bearer. Brendan Bottcher, a former CIS and world junior champion from the University of Alberta, earned the honour in 2013 in Trentino, Italy. The Winnipeg-born Meakin skipped the University of Manitoba Bisons to a CIS championship in 2013 and is also a four-time provincial junior champion, a Canadian junior champion and a world junior silver medallist (2009). In Granada, the 24-year-old will compete alongside Lauren Horton (third), Lynn Kreviazuk (second) and Jessica Armstrong (lead), all from the 2014 CIS champion Carleton University Ravens. “As the announcement was happening, I was just so excited,” said Meakin, who led the Canadian delegation in O Canada following the announcement. “I really wasn’t expecting it, and I’m just so honoured to be chosen as the flag-bearer. The girls and I have worked hard, and we’re ready, and kicking it off in this fashion is pretty special.” 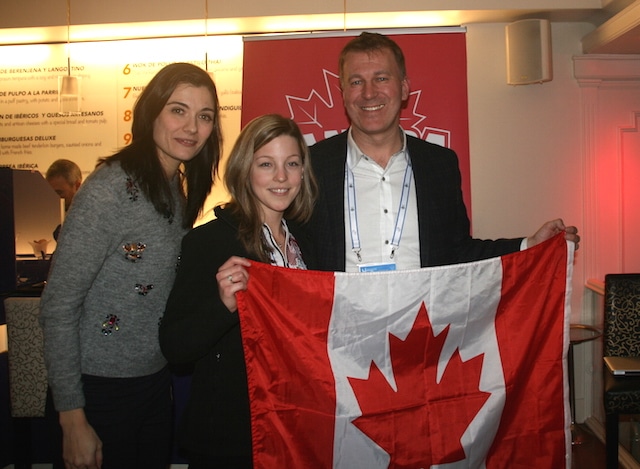 “Breanne is a great choice to lead our delegation at the 2015 Universiade in Granada,” said Cates. “She is a CIS champion, a provincial and Canadian champion, and she has represented her country before. She is also an emerging power on the Canadian women’s curling circuit, and a true ambassador on and off the ice. She will no doubt lead us proudly in Granada.” While the opening ceremony is set for Wednesday, Canada opened the defense of its men’s hockey title earlier Tuesday with an 11-1 win over South Korea. The reigning three-time champion Canadian women’s hockey squad hits the ice on Wednesday against Kazakhstan. Curling and alpine skiing both get underway on Thursday, while snowboarding (Feb. 10) and short track speed skating (Feb. 11) don’t start until next week. Since curling made its Universiade debut in 2003 in Tarvisio, Italy, the Canadian women have racked up three medals in five appearances, including gold in 2007 (Turin, Italy) and silver in 2003 and 2009. Hoping to improve on sixth-place finishes at each of the last two FISU Games, Meakin’s foursome enters the competition on Thursday with games against South Korea and Japan. The curling finals are set for Feb. 13. NOTE: Biathlon and Nordic skiing events took place in Slovakia from Jan. 25 to Feb. 1, prior to the start of the Games in Granada. Six Canadian student-athletes competed during that first leg. Team Canada website: https://english.cis-sic.ca/universiade/winter/2015/index Granada 2015 website: https://www.granada2015.org/en/ About the Winter Universiade The Winter Universiade is a biennial international multi-sport event open to competitors who are at least 17 and less than 28 years of age as of January 1 in the year of the Games. Participants must be full-time students at a post-secondary institution (university, college, CEGEP) or have graduated from a post-secondary institution in the year preceding the event. The Granada Universiade will feature nine compulsory sports and one optional sport. Compulsory sports: alpine skiing, biathlon, ice hockey, curling, nordic skiing, short track speed skating, figure skating, synchronized skating, snowboarding. Optional sport: freestyle skiing. Official website: www.granada2015.org About Canadian Interuniversity Sport Canadian Interuniversity Sport is the national governing body of university sport in Canada. Every year, over 11,500 student-athletes and 700 coaches from 56 universities and four regional associations vie for 21 national championships in 12 different sports. CIS also provides high performance international opportunities for Canadian student-athletes at Winter and Summer Universiades, as well as numerous world university championships. For further information, visit www.cis-sic.ca or follow us on: Twitter: https://www.twitter.com/CIS_SIC Facebook: https://www.facebook.com/cissports YouTube: https://www.youtube.com/universitysport Instagram: https://www.instagram.com/CIS_SIC