Team Canada has opened the women’s curling competition at the 2015 Winter Universiade in Granada, Spain, with a pair of of victories. 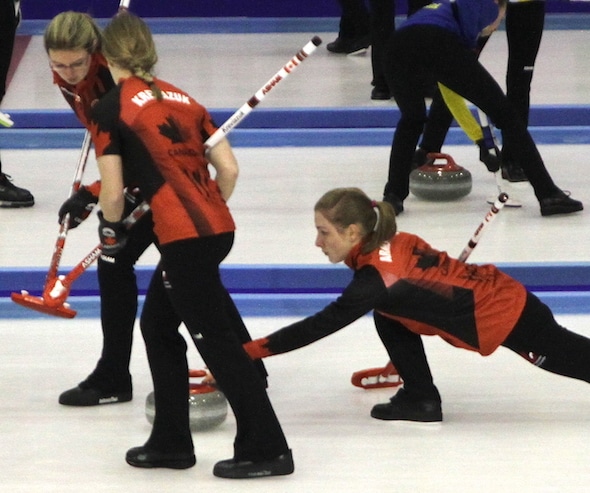 Breanne Meakin’s Ottawa-based team — third Lauren Horton, second Lynn Kreviazuk, lead Jessica Armstrong and coach Doug Kreviazuk — opened the 10-team round-robin competition on Thursday at the Fuentenueva Pavilion on the campus of the University of Granada by beating South Korea’s Kim Eun Jung 6-4, and following up with a 10-2 triumph over Japan’s Mayu Minami in the evening draw. The 2-0 start left Canada tied for top spot in the standings with Sweden’s Sara McManus and Russia’s Anna Sidorova, the reigning Universiade gold-medallist and 2014 Ford world women’s championship bronze-medallist. Russian third, Margarita Fomina, and lead, Ekaterina Galkina, both members of the Russian Olympic team with Sidorova as well as the world-championship team, are participating in their fifth Universiade competitions, beginning with the 2007 edition in Italy. The competition is open to all students of accredited post-secondary institutions. Russia beat the United States 13-3 and the host team from Spain 22-1. “We wanted to get off to a strong start,” said Meakin, who attends the University of Manitoba while her teammates attend Carleton University. “That was our goal. It feels great to have two wins under our belt, and we just want to keep it going. The ice is fantastic, and predictable. We’re really reading it well… it’s nice to be able to put the broom down with confidence. The team is playing great.” The Koreans hung tough and had the Canadians in a 4-4 tie through nine ends, but Meakin executed a perfect hit-and-roll with her first shot of the 10th end, and didn’t need to throw her final rock of the game after Kim’s last-rock miss. In the win over Japan, Canada took control early with a first-end deuce, then two back-to-back deuces in the sixth and seventh ends before putting the victory away with four in the ninth end The Canadian women are back on the ice on Friday against Great Britain at 8 a.m. EST. “Our team is playing really well,” said Kreviazuk. “It feels like we prepared really well for this event, and it’s nice to have some early success.” In men’s play, meanwhile, Matt Dunstone’s team from Winnipeg fell victim to a hot-shooting U.S. skip Stephen Dropkin in dropping a 6-5 decision in Canada’s lone game of the day. Dunstone, backed up by third Jim Coleman, second Daniel Grant, lead Chris Gallant and coach Scott Grant, took a big lead early with four in the third end to make it 4-2, but the Americans rallied to tie it with singles in the fifth and sixth ends thanks largely to Dropkin’s late-end heroics. After Dunstone barely missed on a double-takeout with his first shot in the 10th end, Dropkin was able to protect his steal point, and Dunstone’s Hail Mary attempt at the end was in vain. The Canadian men play a pair of games on Friday — at 3 a.m. EST against  2013 world junior champion Kyle Smith of Great Britain (0-1) and 1 p.m. EST against Jakub Splavec of the Czech Republic (1-0). There are numerous ways to follow Team Canada at the Winter Universiade: Official Universiade results site: https://www.granada2015.org/en/sports/schedule-a-results Official Universiade live streaming: https://www.granada2015.org/en/media-universiada/universiade-tv Official Team Canada Universiade websites: ENG: https://english.cis-sic.ca/universiade/winter/2015/index FRE: https://francais.cis-sic.ca/universiade/hiver/2015/index CIS YouTube (Daily videos of Team Canada at Universiade): https://www.youtube.com/universitysport/ FISU YouTube: https://www.youtube.com/user/FISUTV Team Canada Facebook (photos, updates, recaps): https://www.facebook.com/CDNUniversiade Team Canada Instagram (photos): https://instagram.com/cdnuniversiade Team Canada Twitter (updates, photos, recaps): https://twitter.com/CDNUniversiade