Team Canada had one win and one loss in a pair of games that came down to the last rock at the 2015 World Wheelchair Curling Championship in Lohja, Finland. 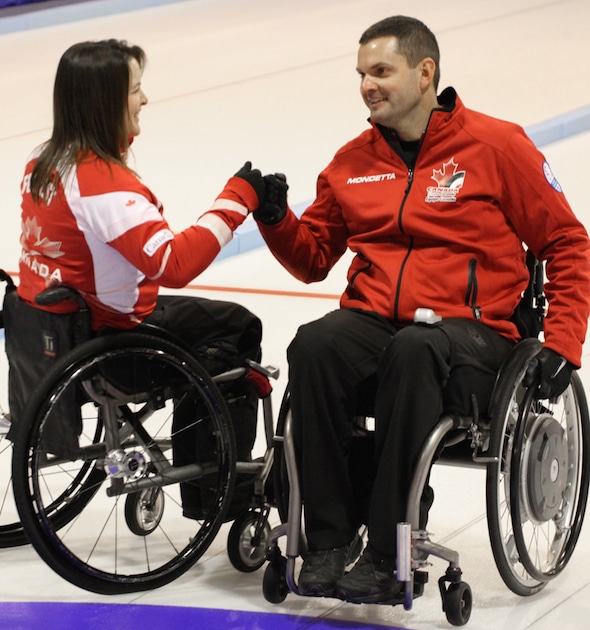 Canada — skip Mark Ideson of London, Ont. (throwing lead rocks), vice-skip Ina Forrest (Armstrong, B.C.; throwing fourth stones), third Dennis Thiessen (Sanford, Man.), second Sonja Gaudet (Vernon, B.C.), alternate Marie Wright (Moose Jaw, Sask.), and coach Joe Rea (Prince George, B.C.) — capped off Day 3 of competition with an all-North American game against Patrick McDonald of the United States. The Americans needed a score of two in the eighth end to win a high-scoring 9-8 affair against Canada. Canada led 2-1 after three ends, but the U.S. cracked open the game with a four-ender in the fourth and gained a 5-2 lead. However, the Canadians did not bow out of the contest and quickly responded with three points of their own in the fifth end and trailed 5-4. The U.S. scored a deuce in the sixth, and Canada replied with another score of three in the seventh. Canada entered the last end leading 8-7, but did not have hammer. The U.S. picked up another deuce in the eighth end to secure the victory. The loss to the Americans was somewhat alleviated with a 6-4 victory against Jalle Jungnell’s Swedish team during the morning draw. Canada’s score of three in the fourth end was the only crooked number on the scoreboard once the final rock was thrown. Canada opened with the hammer and a single in the first end, but Sweden scored one in the second and stole another point in the third, taking a 2-1 lead. Canada’s three in the fourth allowed the Canadians to regain the lead at 4-2, but Forrest was convinced that it was not the turning point in the game. “I think in curling most of the time you can have a big end and they can sneak back which is kind of the way it went for us, so it’s a good thing we had our three-ender,” Forrest said. Jungell and his Swedish team did indeed sneak back into the game with a single in the fifth, and a stolen single in the sixth to tie the game 4-4. Canada scored one with the hammer in the seventh, and Forrest made two clutch draws with her fourth stones in the final end for a Canadian steal of one point and a 6-4 victory. Forrest is throwing fourth stones for the first time at an international event, and admits there has been a bit of a learning curve for herself and the team. “It takes a little getting used to your first time out. It was a little shaky to start but I’m working into it now. As a team I think we’re really coming together playing at this level,” Forrest said. Canada, now 2-3, hovers just outside of playoff position and will attempt to advance in the standings with two games tomorrow. First Canada will play Scotland’s Aileen Neilson at 9:30 a.m. Lohja time (2:30 a.m. EST). Neilson and crew won bronze at the 2014 Paralympic Winter Games as Great Britain. In the afternoon Canada will play Rune Lorentsen of Norway at 3:30 p.m. Lohja time (8:30 a.m. EST). The game will be live streamed online at https://wwhcc2015.curlingevents.com/video. Live scoring, standings, and the live stream from the 2015 World Wheelchair Curling Championship can be found at: https://wwhcc2015.curlingevents.com/. This story will be posted in French as soon as possible at https://www.curling.ca/?lang=fr/