Ever get that feeling that you should be somewhere and you’re missing something major? I had that feeling last week as it was the first time in 10 years that I was not at the Alberta Men’s Provincials. 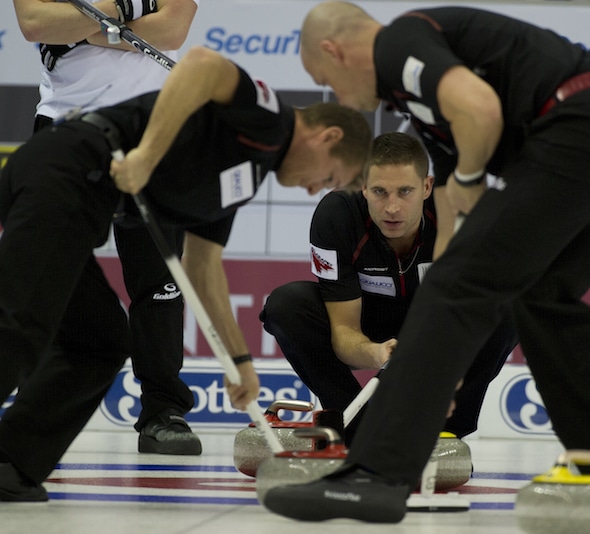 From left, Carter Rycroft, Nolan Thiessen and John Morris are putting the finishing touches on their preparation for the 2015 Tim Hortons Brier. (Photo, CCA/Michael Burns)

Every February since 2005 I have packed up my heavy clothing to stay warm in the normally sub-arctic temperatures and drove to a small Alberta town to chase the dream of a Purple Heart. This year, I was sitting in a Tim Hortons, waiting to go to my training session and practice, and filling my time by writing this blog while following the linescores for all the provinces. One thing I know is that whether it’s your first or 10th, winning a Purple Heart is special for anyone so this past weekend was one of the most exciting of the year for curling fans. As you know, there’s no reason to feel sorry for me; after all we have our trip booked to the 2015 Tim Hortons Brier in Calgary as the first-ever Team Canada. There aren’t too many teams that wouldn’t trade places with us in a heartbeat. Until this year, all teams that appear at the Tim Hortons Brier are riding the momentum and excitement of winning their provincial title. Teams emerge after playing quite a few high-pressure games just a few weeks before the Show, which helps prepare teams for what a Tim Hortons Brier is going to be like. They have those good vibes that only come from walking through the fire and being victorious. That leaves us with an interesting predicament. How do we prepare properly without having those high-pressure reps? Everyone is a little different but I am starting by using this time to really get my body prepared. I filled my days the week that I am normally at Provincials (and entire month, for that matter) with two-a-day workouts and practice time on the ice. 5 a.m. workouts, training and active release therapy with my team at River Valley Health and running on the treadmill at home all get incorporated into my daily routine, along with throwing practice rocks. My goal is to over-prepare and ensure that my body is ready for the rigors of a Tim Hortons Brier week. Our goal is to win in Calgary, so that means 14 high-pressure games in nine days, which is tough on the mind and body so preparing yourself for that is key. The other area we’re lacking is game competition. Let’s be honest, there is no way to re-create a provincial championship-pressure type of situation, but our team is planning on signing up a few teams to play games against us later on this month to enable us to not start the Tim Hortons Brier without playing an actual curling game since the World Financial Group Continental Cup. Last year, my team tried that by entering provincials with zero games played for almost two months since the Olympic Trials and we started our week with a 1-2 record and had to battle through five straight win-or-go-home games. Starting the Tim Hortons Brier at 1-2 is a recipe for disaster that we don’t want to attempt to navigate. Planning high-volume practice as well as actual game competition should help us be properly prepared for Calgary in March. No matter what our plans look like, I can’t wait for Feb. 28 to get here and the Tim Hortons Brier to get underway. Ever since we decided to ask John Morris to play with us last April and we knew that we would be the first Team Canada, I have been anticipating this event. The Tim Hortons Brier is always special; it’s the event that allows us to compete to represent our country at a World Championship. No matter whether I won a Purple Heart the traditional way or get to put on the Maple Leaf as defending champion, the Tim Hortons Brier is one of the best 10 days of the year. And now we know who’s going to be there with us. (Nolan Thiessen is a two-time Canadian champion who plays lead for Team John Morris, AKA Team Canada, who will be competing in the 2015 Tim Hortons Brier, presented by SecurTek Monitoring Solutions, Feb. 28-March 8 in Calgary).