Canada guaranteed a medal at Universiade

Team Canada women will meet Russia in the gold medal game of the 2015 Universiade in Granada, Spain, after defeating Switzerland 8-3 in the semifinal on Thursday morning. 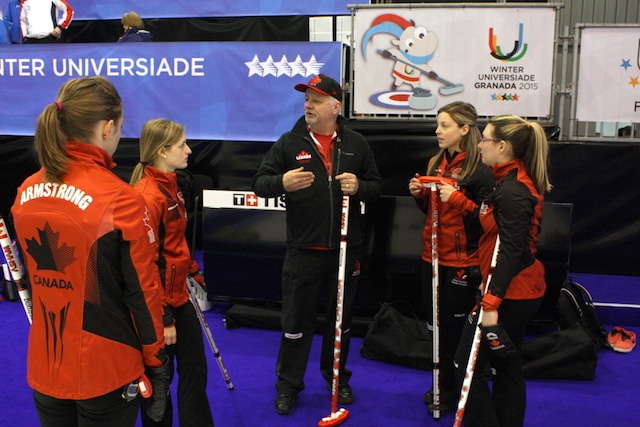 Canada’s Breanne Meakin, of Winnipeg, and her Ottawa-based team of third Lauren Horton, second Lynn Kreviazuk, lead Jessica Armstrong and coach Doug Kreviazuk finished the round robin at the top of the standings with a 9-0 record, but they got off to a slow start against Switzerland’s Michele Jaeggi. After blanking the first end, they gave up two steals to trail 2-0. In the fifth, Meakin made a draw to the button to score a deuce, and the teams headed into the break tied 2-2. Canada took control in the second half of the game, starting with a steal of three in the sixth end. They held Switzerland to singles and stole another deuce in the ninth when Jaeggi’s final rock slid through the house. “We like to keep it open in the first few ends, but then I had some unforced errors, which could have been some nerves, but the girls were playing great today and they kept me in it. I started making a lot of shots and it paid off in the second half of the game,” said Meakin. “There was a definite momentum swing, especially after we stole three. The crowd really started to get into it, and it was a good finish.” With the 8-3 win, the Canadian women secure their spot in the gold medal game, Friday at 3 a.m. EST, against Russia’s Sidorova, who defeated Sara McManus of Sweden, 10-4, in the other semifinal. Sidorova won Universiade gold in 2013 (Trinzoni, Italy) and bronze in 2011 (Erzurum, Turkey). “We have a very record good record by sticking to our process, and relying on what we do well,” said Meakin. “They’re obviously a very good team, but we’ll bring our best and see what happens.” The Canadian men’s team – Matt Dunstone and his Winnipeg team of Daniel Grant, Jim Coleman, Chris Gallant and coach Scott Grant – will be cheering from the sidelines after finishing fifth in the standings and missing the playoffs. There are numerous ways to follow Team Canada at the Winter Universiade: Official Universiade results site: https://www.granada2015.org/en/sports/schedule-a-results Official Universiade live streaming: https://www.granada2015.org/en/media-universiada/universiade-tv Official Team Canada Universiade websites: ENG: https://english.cis-sic.ca/universiade/winter/2015/index FRE: https://francais.cis-sic.ca/universiade/hiver/2015/index CIS YouTube (Daily videos of Team Canada at Universiade): https://www.youtube.com/universitysport/ FISU YouTube: https://www.youtube.com/user/FISUTV Team Canada Facebook (photos, updates, recaps): https://www.facebook.com/CDNUniversiade Team Canada Instagram (photos): https://instagram.com/cdnuniversiade Team Canada Twitter (updates, photos, recaps): https://twitter.com/CDNUniversiade