There’s something about the Ford Hot Shots skills competition that clearly brings the very best out of Newfoundland/Labrador skip Heather Strong. 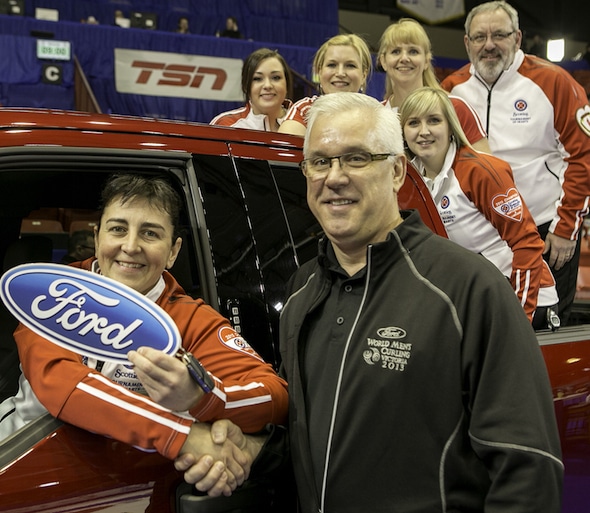 Heather Strong, left, with her Newfoundland/Labrador teammates behind her, is congratulated on winning the lease on a 2015 Ford F-150 XLT by Gerald Wood, General Manager, Western Region for Ford of Canada. (Photo, CCA/Andrew Klaver)

On a snowy Saturday in Moose Jaw, Sask., Strong become just the second player ever to capture back-to-back titles in the Ford Hot Shots, beating Ontario second Stacey Smith 19-16 in the final at Mosaic Place, just prior to the opening round-robin draw of the 2015 Scotties Tournament of Hearts. This (winning back-to-back) is not something you prepare for,” said Strong with a smile. “It’s kind of like lightning striking twice, right. I’m proud of the girls. The shots are made with the sweeping and the line calls. It’s a team effort.” For her efforts, Strong was presented with a two-year lease on Canada’s best-selling pickup, an all-new 2015 Ford F-150 XLT to go along with the Ford Fusion she won last year in Montreal. “When I won the Fusion last year I decided my two dogs wouldn’t be allowed in it,” said Strong. “There’s the lease and the hair involved. But if I have two of them, I don’t know. I’m going to have to break that rule with one of these vehicles.” The annual competition features competitors attempting six different shots: Hit and Stay, Draw the Button, Draw the Port, The Raise, Hit and Roll and Double Takeout. Each shot is awarded points on a scale from 0-5 depending on the end result of the shot. Ford of Canada provides the winner of the Ford Hot Shots at the Scotties Tournament of Hearts and Tim Hortons Brier with a two-year lease on an all-new 2015 Ford F-150 XLT. It is equipped with a 5.0L V8 engine, chrome exterior finishes and SYNC — Ford’s voice activated, in-vehicle technology, with an approximate retail value of $20,000. The all-new Ford F-150 is the toughest, smartest and most capable F-150 ever. The newly designed exterior is characterized by a new shape that suggests capability, with a wider “Built Ford Tough” stance, prominent wheel arches and a chiseled grille. It also has an all-new high-strength aluminum-alloy body, four capable and fuel-efficient engines and class-exclusive features, including 360-degree camera view and remote tailgate release, the 2015 F-150 sets the standard for future trucks. Smith earned $2,000 for her efforts, while third-place finisher Kaitlyn Lawes of Manitoba received $1,000.