Manitoba’s Jennifer Jones (Winnipeg) moved to the top of the standings at the Scotties Tournament of Hearts Tuesday afternoon with an easy 9-3 win over Quebec’s Lauren Mann (Montreal). Jones has won all six of her games at the championship. Alberta’s Val Sweeting (Edmonton) is 5-0. Sweeting plays British Columbia’s Patti Knezevic (Prince George) on the 7 p.m. draw, while Jones has the night off.

In other games, Ontario’s Julie Hastings (Thornhill) defeated Knezevic 9-4, Prince Edward Island’s Suzanne Birt (Charlottetown) eked out a 6-5 win over Nova Scotia’s Mary-Anne Arsenault (Halifax) and Newfoundland/Labrador’s Heather Strong (St. John’s) defeated Northern Ontario’s Tracy Horgan (Sudbury) 6-4. There was clearly no letdown in Jones’s game after coming off a gruelling 8-7 win over Team Canada’s Rachel Homan (Ottawa) on the late draw Monday, although the Olympic champion had to draw the button up six and facing four on the seventh end. Making those shots have been routine for her here. “We just love to curl, so it wasn’t hard to get up for the game. We were a little shaky at the start, but I thought we ended the game well. We will take that forward and into tomorrow.” Jones said her team is having fun. “It’s a great atmosphere out there and a great crowd. It’s always fun to be at the Scotties. Our family is here, we love to curl. Really, life can’t get any better.” Jones was planning to have a family dinner on Tuesday. Hastings continues to be one of the most consistent team at the Scotties, losing on last rock to Rachel Homan and Jennifer Jones earlier in the week. She was in control the whole way. She said she is unaware of the standings at this point. “It’s funny you should say because I am not watching the scoreboard yet,” Hastings said. “I’m not sure who is where in the standings. I know we have three losses and we have three wins now. I think we are in a good position going into the rest of the week.” Prince Edward Island’s win over Nova Scotia was big. The winner went to 3-3 and the loser to 2-4. “Some ends were really good but some were a little sloppy here and there,” Birt said. “You always want a chance to win the game and we held in there and made a few shots when we needed them.” 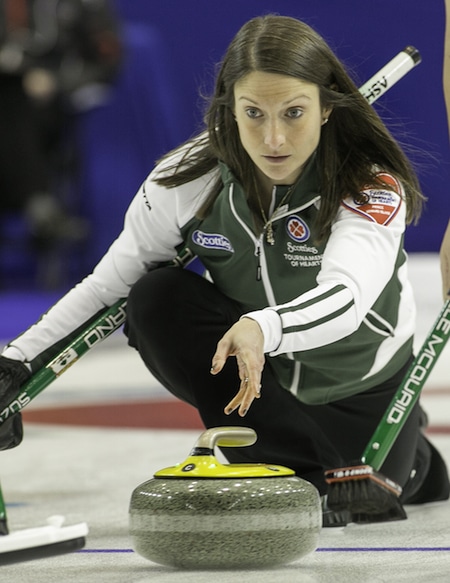 With her last-shot win, Strong joined Horgan at 3-3. “Yesterday, double losses but in big scheme of things, considering who we were playing we are OK to lose those couple of games. This afternoon’s win was big. We need to play well. That’s why this afternoon’s game was big, because we played well enough to win.” Manitoba is 6-0, with Alberta’s Val Sweeting (Edmonton) at 5-0 and Team Canada’s Rachel Homan (Ottawa) at 4-1. Next up is Saskatchewan’s Stefanie Lawton at 3-2. Then there is a logjam. Northern Ontario, Ontario, Newfoundland/Labrador and Prince Edward Island are at 3-3, while Nova Scotia is at 2-4. Quebec and British Columbia are 1-5, while New Brunswick’s Sylvie Robichaud (Moncton) is 0-5. The next draw is at 7 p.m. Tuesday. For ticket and other event information, visit https://www.curling.ca/2015scotties-en/ For the complete schedule, go to https://www.curling.ca/2015scotties-en/draw-schedule/ TSN (RDS2 in French), the exclusive television network for the CCA’s Season of Champions, will provide complete coverage of the 2015 Scotties Tournament of Hearts.