Alberta’s Val Sweeting and Manitoba’ Jennifer Jones will meet in the Page playoff 1-2 game at the 2015 Scotties Tournament of Hearts.

Sweeting defeated Team Canada’s Rachel Homan 7-6 Thursday afternoon at Mosaic Place, while Jones downed Northern Ontario’s Tracy Horgan 6-3. Alberta is 9-0 and Manitoba 9-1. The two will meet in the final round-robin game Friday morning. They will do battle again at 7 p.m., with a berth in Sunday’s gold-medal game on the line. Saskatchewan’s Stefanie Lawton and Homan are tied for third at 6-3. Lawton defeated New Brunswick’s Sylvie Robichaud 9-4 Thursday afternoon. Also in the hunt is Horgan at 6-4. Ontario’s Julie Hastings still has an outside shot at a tiebreaker with a 5-5 record. Sweeting scored two on the 10th end for the victory. Homan didn’t make either of her shots perfectly, spilling rocks out of the four-foot, but not killing enough Sweeting stones to win outright or force the game to an extra end. Sweeting was left with a short raise takeout for the win. It appeared as though she turned the in-turn hit in a touch, but her sweepers held it just straight enough to knock the Homan rock out of the rings. “On the 10th, we were fortunate when Rachel took out her own rock on her last hit,” Sweeting said. She admitted Homan had her on the defensive in the middle of the game. “We were trying to keep the game close at the midway point when Rachel was putting a lot of rocks in play.” Homan will now play in the Page 3-4 game or a tiebreaker, depending on the results of the final two draws. “We didn’t play a great game and it came down to last rock,” Homan said. Jones was pleased to hear she is in the 1-2 game Friday night. “I think you go hard twice,” Jones said. “You never want to let up anything. We just want to go out there and play our very best. We are really excited to be in the (Page) 1-2 game.” 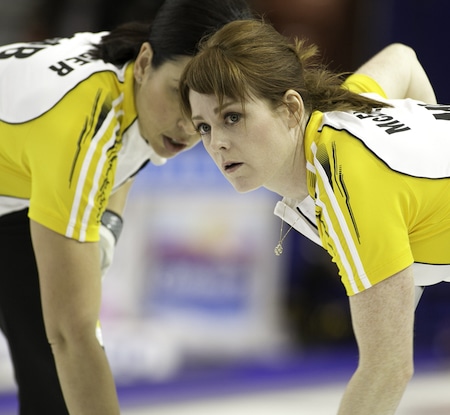 Jones thought her team played better the past couple of games since losing Wednesday to Mary-Anne Arsenault of Nova Scotia. “I thought we had a little bit of a blip there where we weren’t playing as well for a couple of games. But I thought we played better tonight. She was asked what role experience plays at this time in the competition. “You don’t really think about it, but experience is a part of you. I always say you don’t need experience to win, but experience definitely helps. It helps you calm your nerves, it helps you understand how everything is going to unfold and happen. I think it helps you play better. But you definitely don’t need experience to win.” Lawton and Sweeting play Thursday night in a game that is important to Lawton. A win will clinch her no worse than a tiebreaker. A loss will drop her into a tie with Horgan. There is a 7 p.m. draw tonight. For ticket and other event information, visit https://www.curling.ca/2015scotties-en/ For the complete schedule, go to https://www.curling.ca/2015scotties-en/draw-schedule/ TSN (RDS2 in French), the exclusive television network for the CCA’s Season of Champions, will provide complete coverage of the 2015 Scotties Tournament of Hearts.