Team Canada’s Rachel Homan is in the playoffs at the Scotties Tournament of Hearts, but it wasn’t easy.

Horgan outcurled Homan for much of the game, before missing her last rock on nine, giving Homan a steal of two. The two-time Canadian champions escaped with a 6-4 win. Homan will play Saskatchewan’s Stefanie Lawton in the Page 3-4 game Saturday at 10 a.m. Homan ended a two-game losing streak that put her on the brink of elimination. Homan and Horgan were tied at 6-4 in the standings going into their game. Homan was not sharp in the early going. She rolled out on two hits on the third end, turning a deuce into a steal of one for Horgan. On the fourth, Horgan applied pressure again. Homan was facing three with her final rock. She needed to hit the button to count one. She came up short of the four-foot, cutting Horgan to steal of one. That gave Horgan a 3-1 lead. On the fifth end, Homan was again facing three, but drew the button to count one. Would it change the momentum? Homan’s team played a perfect sixth, but Horgan drew the button with three Homan rocks in and around the four-foot to get a point and restore the two-point lead. Homan got two on the seventh end to tie the game at 4-4. After Horgan blanked the eighth end, Homan stole two on nine. A couple of back-breaking misses by the Northern Ontario rink, including Horgan’s last rock, decided the game. Horgan needed to bump a rock of her own into the four-foot, but was heavy. “That was such a junky end and I just caught between two shots,” Horgan said. “I just happened to hit it in the exact wrong spot.” Homan ran Horgan out of rocks on the 10 end to escape with the 6-4 win and date with Lawton in the three-four game. “We made some great shots and some shots we wish we had back,” Homan said. “We’re in the playoffs. That was our goal going into this. There is such a good field that we are excited to be in the playoffs and still alive.” Horgan was happy with her week. She said the three games she played in the pre-qualifying event didn’t affect her play at the end. “We loved playing here, so it’s sad when we don’t get to play more games. We just wanted to play as many games as possible. But you can’t be sad losing to the Homan team. They are such a great team.” In the warmup game for tonight’s Page 1-2 game, Manitoba’s Jennifer Jones defeated Alberta’s Val Sweeting 10-5. The more important battle will be the one Friday night at 7 p.m. at Mosaic Place. The winner of the Page 1-2 game advances to Sunday’s final, while the loser will play in the semi-final Saturday at 3 p.m. The Page 3-4 game will be played at 10 a.m. on Saturday. Jones has the momentum going into Friday night’s game. She has won four straight since losing to Nova Scotia’s Mary-Anne Arsenault on Wednesday. Meanwhile, Sweeting has dropped her last two, both decisively. “It’s nice to have going into the one-two game for sure,” Jones said. 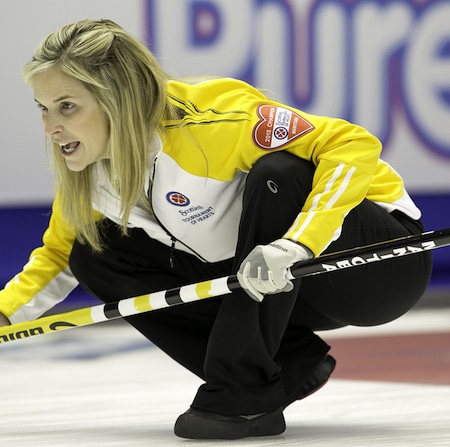 Manitoba skip Jennifer Jones will have the top seed in the playoffs. (Photo, CCA/Andrew Klaver)

She was asked how important momentum is in curling. “I think momentum in sport is always good, but they have been around a long time and know it all starts fresh com the playoffs. At the end of the day they wanted to play the one-two game so I am sure they are happy with that and we’re going to have to be tough tonight.” Sweeting was also asked about momentum going into the final. “Well, hopefully nothing,” she said with a laugh. “Ironically, I felt like I was throwing better in that game and wasn’t getting the results . . . overall I feel better than last night.” Sweeting lost 9-1 to Lawton in the late draw Thursday. “We closed out with two really good teams and knew that our last three would be tough. It was tough all along, too, and we battled. We know what we need to out there and look forward to tonight.” Lawton needed an extra end to defeat Prince Edward Island’s Suzanne Birt. Lawton had five games with a shooting percentage above 90 per cent going during the round-robin. Not bad for a skip who had played eight competitive games coming into the tournament. Lawton had a baby in October and didn’t rejoin her team until the provincial playdowns in January.