Jennifer Jones and her team from Winnipeg wore the Maple Leaf with pride and class a year ago in Sochi, Russia, winning gold at the 2014 Winter Olympics. Now, the team will get another chance to wear that symbol on the world stage, in three weeks’ time — at the Zen-Noh World Women’s Curling Championship, presented by Ford of Canada, March 14 to 22 in Sapporo, Japan. Jones, backed up by third Kaitlyn Lawes, second Jill Officer, lead Dawn McEwen, alternate Jennifer Clark-Rouire and coach Wendy Morgan, captured her fifth Scotties Tournament of Hearts title on Sunday night at Mosaic Place in Moose Jaw, beating Alberta’s Val Sweeting 6-5 in a thrilling gold-medal game. It also was Officer’s fifth Canadian title, a fourth win for McEwen and Lawes’ first since she joined the team following the 2009-10 season. “It was a goal of ours to win a Scotties together, and this was the third final we’ve been in with this lineup,” said Lawes. “I’m so proud of the team for bouncing back after such an amazing season last year, and now we’ve won the Scotties. Any chance you can represent your country on the international stage is very, very special.” 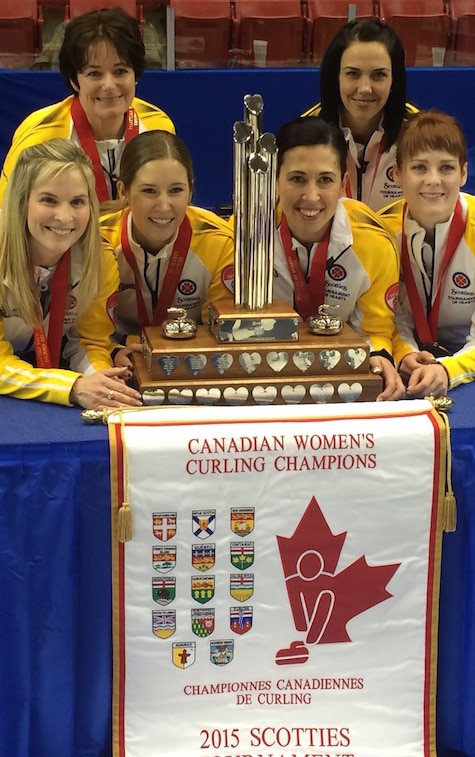 “I’m absolutely thrilled (for Kaitlyn),” added Jones, whose previous titles were in 2005, 2008, 2009 and 2010. “She’s been a huge part of this team; we lost a couple of (Scotties) finals that were a little devastating (2011, 2013), so to come out here and win this one? It was a little close for comfort but we managed to pull it off when we had to.” It was nailbiter from the first end with the teams trading haymakers — Manitoba opened with a deuce; Alberta answered back in the second. After a blanked third, the teams were forced to swap singles for the next six ends, the result of some wonderful shotmaking, particularly by the skips. Sweeting, for instance, made a wonderful in-off to salvage her single point in the fifth end when Manitoba had a rock buried on the button. But Jones delivered her finest shot in the eighth, a runback double takeout that prevented an almost sure Alberta steal, and was able to get her point to hold onto her lead. In the ninth, Jones again came up big, picking a nearly frozen Alberta stone and leaving her shooter at the back four-foot and forcing Sweeting to draw for one, giving Manitoba the hammer coming home in a tie game. And in the 10th, it was sheer perfection from the Jones Gang that left Jones needing only the full 12-foot to draw for the win. “I’m really proud of the girls; it was a really great game,” said Sweeting, who lost last year’s final to Team Canada’s Rachel Homan. “Both teams played really well, but I’m just so proud of the team. It’s been an up-and-down year (with a pre-season lineup change, followed by another change a few weeks into the season), and if you would have told me that this would be the final (result of the year), I would have been happy with it. I think we’ll take away even more than we did last year — just the confidence and the fact that we did play well in the final. We made it there again, we played better and we lost to a great team. They’ll represent us really well.” With the win, the Jones team not only will go looking for Canada’s first world women’s championship since Jones prevailed in 2008 at Vernon, B.C. (with Officer and McEwen aboard), she also will play at the 2015 Home Hardware Canada Cup in Grande Prairie, the 2016 World Financial Group Continental Cup in Las Vegas and return to the 2016 Scotties in Grande Prairie as Team Canada. “Oh, it’s awesome,” marvelled Jones. “To come off our Olympic year, and to come back and win the Scotties and be able to put the Maple Leaf on your back is truly an honour. I can’t believe we get to do this. It’s truly unbelievable.” It’s the 11th time a Manitoba team has won the Canadian women’s curling championship. The 2016 Scotties Tournament of Hearts will be played Feb. 20-28 at Revolution Place in Grande Prairie, Alta. The next event in the CCA Season of Champions is the 2015 Tim Hortons Brier, presented by SecurTek Monitoring Solutions, beginning on Saturday at the Scotiabank Saddledome in Calgary. This story will be posted in French as soon as possible at https://www.curling.ca/2015scotties-fr