TALLINN, Estonia – Our newly crowned Canadian junior champions will take to the ice on Saturday at the Tondiraba Ice Hall in Tallinn, Estonia, for the 2015 World Junior Curling Championships. 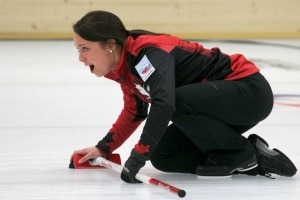 Kelsey Rocque, skip of the women’s team, will be looking to defend her World Junior title with her new line up of Danielle Schmiemann, Holly Jamieson, Jessica Iles, alternate Kristen Streifel and coach Amanda-Dawn Coderre. Rocque, third cousin of three-time world champion Marcel Rocque, won the 2014 World Junior Curling Championship women’s gold medal with a 6-4 win over South Korea. This year, she is looking to join Eve Muirhead as the only junior women’s skips to repeat as world junior champion. After just missing the podium at last year’s event in Flims, Switzerland, the men are hoping that second time’s a charm. Back in 2014, Calvert, along with Kyle Kurz, Lucas Van Den Bosch, Brendan Wilson and coach Tom Clasper, had a heart-breaking loss to Norway in the bronze medal game. This year, the original four players are back and joined by alternate Colton Lott. 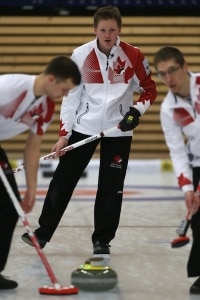 Rocque and Calvert skipped their teams to victory at the recent M&M Meat Shops Canadian Junior Championships in Corner Brook, N.L. This edition of the world junior curling championships is unique, as it is the first time that the top junior curlers and figure skaters will be competing concurrently at the same venue. The ISU World Junior Figure Skating Championships 2015 will be taking over one of the rinks, as the curling competition heats up on the other ice pad. Calvert will face off against Norway first on Saturday at 2 p.m. local time while Rocque will play the Czech Republic team at 6:30 p.m. local time. The World Junior Curling Championships will be broadcast on the World Curling Federation’s YouTube channel at www.youtube.com/WorldCurlingTV The Canadian men’s team will be the featured game on YouTube tomorrow at 2 p.m. local, 7 a.m. ET. For the full game and broadcast schedule information, go to: https://wjcc2015.curlingevents.com/schedule For even more of an insider look, Streifel, women’s team alternate, will be keeping a blog of the team’s adventures in Tallinn. Read all about it here: https://k-streif.blogspot.ca This story will be posted as soon as possible at https://www.curling.ca/?lang=fr