Glen MacLeod and his Nova Scotia foursome scored deuces in the first and ninth ends, and threw in a three in the third, to roll past Bob Smallwood of Yukon Territories 9-5 Friday morning in the second game of the pre-qualifying round-robin at the 2015 Tim Hortons Brier, presented by SecurTek Monitoring Solutions, at the Saddledome in Calgary. 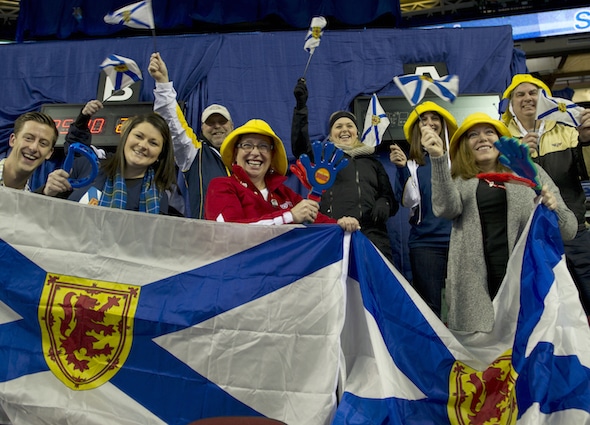 MacLeod, with third Peter Burgess throwing last rocks, second Colten Steele and lead Rob McLean, plays P.E.I. later today in the last game of the three-province mini-tournament with the eventual winner moving into the main draw. “Each team played well at times and also gave each team opportunities,” MacLeod said of the game that saw the teams exchange deuces in the first two ends, Nova Scotia crack its triple and Yukon scoring two in the fourth.

“For us it was about getting a feel for the ice, how much speed, what’s the curl going to be like,” added MacLeod. “So we came off learning a few things. We’ll adjust a little bit on how we manage the ice but throwing wise and strategy we’re now one game in and hopefully on our way to getting in a groove.” Smallwood, along with teammates Wade Scoffin, alternate Scott Odion playing for Steve Facteau, and Clint Ireland, had beaten Adam Casey of P.E.I. 8-1 Thursday in the first of the pre-qualifying games, but struggled Friday. “We tried too hard,” said Smallwood. “Didn’t play the game we wanted to and ended up getting caught. It’s out of our hands now because I messed up on the draw to the button for last stone draw. If it comes to a three-way tie we’re probably out.” TSN/RDS2, the official broadcast partner of the CCA’s Season of Champions, will provide complete coverage of the Tim Hortons Brier, leading to the gold-medal game on March 8 at 5 p.m. The winner of the 2015 Tim Hortons Brier will represent Canada at the Ford World Men’s Championship, March 28-April 5 in Halifax, in addition to qualifying for the 2015 Home Hardware Canada Cup in Grande Prairie, Alta., the 2016 World Financial Group Continental Cup in Las Vegas and the 2016 Tim Hortons Brier in Ottawa For ticket information, go to www.curling.ca/2015brier-en/tickets/ This story will be posted in French as soon as available at https://www.curling.ca/2015brier-fr/