Colin Hodgson’s rookie nerves have officially been dealt with. 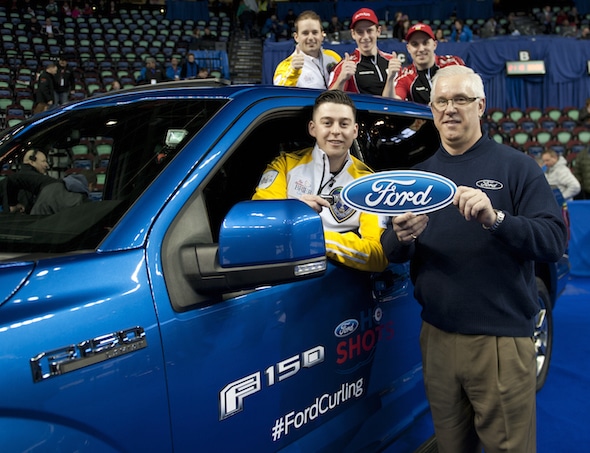 The Manitoba lead, and first-time participant in the Tim Hortons Brier, overcame a hogline violation in the semifinals to capture the Ford Hot Shots skills competition on Saturday at the Scotiabank Saddledome. The competition culminated before the first draw of the 2015 Tim Hortons Brier, presented by SecurTek Monitoring Solutions. Hodgson scored 26 out of a perfect 30 points in the final to beat Saskatchewan lead Dallan Muyres, who finished with 16 points, giving Hodgson the keys on a two-year lease on Canada’s best-selling pickup, an all-new 2015 Ford F-150 XLT. “I can fit my car in the back of it so I’m excited about that,” said an ecstatic Hodgson. “ Now I have to calm down and focus on our first game in about 50 minutes. It totally calmed my nerves and I’m really grateful to get the nerves out of the way.” Hodgson had a red light hogline violation in the semifinals on the simplest shot of the six — the draw to the button. But he still managed to score 22 points — the highest of the four semifinalists (Dallan Muyres reached the final with 21 points, while his brother and defending champ Kirk Muyres, Saskatchewan’s third, had 20 points as did Alberta lead Ben Hebert). The annual competition features competitors attempting six different shots: Hit and Stay, Draw the Button, Draw the Port, The Raise, Hit and Roll and Double Takeout. Each shot is awarded points on a scale from 0-5 depending on the end result of the shot. Ford of Canada provides the winner of the Ford Hot Shots at the Scotties Tournament of Hearts and Tim Hortons Brier with a two-year lease on an all-new 2015 Ford F-150 XLT. It is equipped with a 5.0L V8 engine, chrome exterior finishes and SYNC — Ford’s voice activated, in-vehicle technology, with an approximate retail value of $20,000. The all-new Ford F-150 is the toughest, smartest and most capable F-150 ever. The newly designed exterior is characterized by a new shape that suggests capability, with a wider “Built Ford Tough” stance, prominent wheel arches and a chiseled grille. It also has an all-new high-strength aluminum-alloy body, four capable and fuel-efficient engines and class-exclusive features, including 360-degree camera view and remote tailgate release, the 2015 F-150 sets the standard for future trucks. Dallas Muyres earned $2,000 for finishing second, while Kirk Muyres earned $1,000 for his third-place finish. Past winners at the Brier have been Greg McAulay and Pat Ryan of British Columbia, Alberta’s Don Bartlett, Randy Ferbey, John Morris and Marc Kennedy, Saskatchewan’s Steve Laycock, Manitoba’s Steve Gould (twice), Northern Ontario’s Mike Coulter, Ontario’s Ed Werenich, Craig Savill,  Richard Hart, Glenn Howard and Wayne Middaugh, New Brunswick’s Rick Perron, Jeff Lacey and Marc LeCocq, and Newfoundland and Labrador’s Mark Nichols.