For several agonizing seconds Jim Cotter and his B.C. team watched helplessly as their potential game-winning rock slid ever so closely to the edge of the house before finally stopping to give them an 8-7 extra-end win over Kevin Koe of Alberta in the evening draw Saturday at the 2015 Tim Hortons Brier, presented by SecurTek Monitoring Solutions.

“Hang on, hang on,” was Cotter’s recollections of his yelling as the stone slid across the Scotiabank Saddledome ice in Calgary. “I thought it was going out, thought we were going to 12 (ends).” Koe had hidden a counter and forced the Vernon skip to try a difficult angle double-raise hit and stay as the pro-Alberta crowd tried to unsettle him by chanting “Cotter, Cotter” as he was in the hack. “That’s curling and that’s excitement,” said Cotter, who wasn’t bothered by the crowd. “It’s Calgary and they’re cheering for their hometown boys.” In the other games Steve Laycock of Saskatchewan (Saskatoon) beat Reid Carruthers of Manitoba (Winnipeg) 7-4, Mark Kean of Ontario (Fenelon Falls) stole one in the 10th to nip Adam Casey of Prince Edward Island (Charlottetown) 8-7 and Jeremy Mallais of New Brunswick (Saint John) scored two in the 10th to shade Jamie Koe of Northwest Territories (Yellowknife) 6-5. 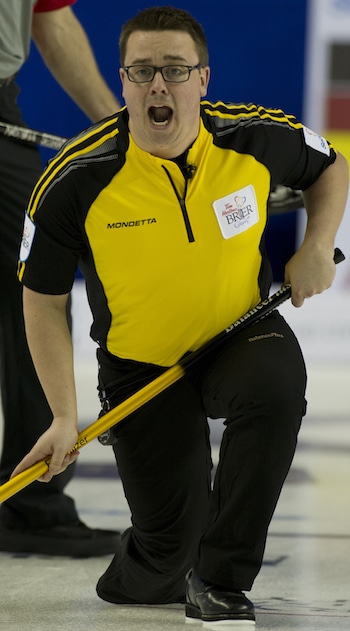 After two draws B.C., New Brunswick, Newfoundland-Labrador, Northern Ontario, Ontario and Team Canada are 1-0, Saskatchewan is 1-1 while Northwest Territories, Quebec, and P.E.I. are 0-1 and Manitoba is 0-2. Cotter, third Ryan Kuhn, second Tyrel Griffith, lead Rick Sawatsky, alternate Grant Olsen and coach Pat Ryan scored deuces in the third, fifth and ninth ends and appeared to have the game in hand, up 7-5 going into 10. But Koe, with third Marc Kennedy, second Brent Laing, lead Ben Hebert, alternate Jamie King and coach John Dunn, counted two of their own in the 10th to tie the game. Koe, who gave up the chance to be Team Canada skip after winning last year’s Tim Hortons Brier to form his new team, almost won the game in 10. His attempted raise takeout had the potential to count a winning four but two Alberta stones slid just out of the house, leaving him two and the tie. “It curls up two more millimetres we probably make it,” said Koe, who struggled early but made some key shots in the late ends. “We had a shot to win, two down coming home that’s all you can ask for. I missed some important shots. Skip needs to play better than that, for sure.” There are three draws Sunday, at 8:30 a.m., 1:30 and 6:30 p.m. (all times MT) 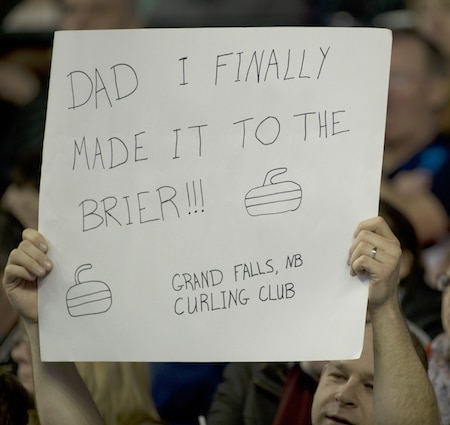 TSN/RDS2, the official broadcast partner of Curling Canada’s Season of Champions, will provide complete coverage of the Tim Hortons Brier, leading to the gold-medal game on March 8 at 5 p.m. The winner of the 2015 Tim Hortons Brier will represent Canada at the Ford World Men’s Championship, March 28-April 5 in Halifax, in addition to qualifying for the 2015 Home Hardware Canada Cup in Grande Prairie, Alta., the 2016 World Financial Group Continental Cup in Las Vegas and the 2016 Tim Hortons Brier in Ottawa For ticket information, go to www.curling.ca/2015brier-en/tickets/ This story will be posted in French as soon as available at https://www.curling.ca/2015brier-fr/