Canadian women on top of leaderboard at World Juniors

TALLINN, ESTONIA – The Canadian women are on a roll after posting their second win of the 2015 World Junior Curling Championships. 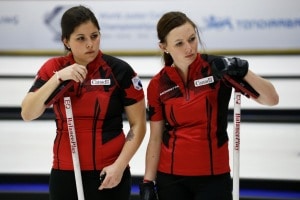 Edmonton’s Kelsey Rocque, Danielle Schmiemann, Holly Jamieson, Jessica Iles, alternate Kristen Streifel and coach Amanda-Dawn Coderre defeated the U.S.A. 7-3 in their afternoon game at the Tondiraba Ice Hall. After blanking the first end, Rocque, the defending World Juniors champion, set the tone of the game with a perfectly executed a 15 foot runback onto a U.S. rock buried behind a guard. This shot set the team up for an eventual deuce in the second end. It was a gutsy call that had the potential to change the face of the game, but that wasn’t the first thought that crossed Rocque’s mind. “We had a similar shot at the Canadian nationals against Québec in the tenth end to win the game and we made it,” said Rocque on her big shot in the second end. “I knew it was a do-or-die shot and I threw it to make it. If I would’ve missed it, it would have been a whole different [game] story.” The U.S. women blanked the third end, before Canada forced them to one point when U.S. skip Cory Christensen had to play a hit against three Canadian counters. In end five, the tables were turned, as Rocque had to make a nose hit against three opponent stones. Canada also executed the shot flawlessly to bring the score to 3-1. The Canadians continued to put the pressure on the U.S. in the sixth end with Christensen looking at a draw against four to pick up another point. In the seventh end, Canada women attempted a double through a tiny port on their last rock, but wicked off a guard and only removed one rock giving the U.S. a steal to tie the game at three points apiece. The Canadian team bounced back in end eight, as Rocque made a quiet tap with her last rock to pick up a deuce. The ninth end was dicey with the U.S. team putting their rocks in tough positions for Canada. An attempt to bring a rock into the house as a guard was deep and Canada left the opposition with a double for three. Fortunately for the Canadians, Christensen wrecked on a guard giving Canada a steal of two. The gloves came off after that end and the U.S. shook to end the game with a final score of 7-3. The Canadian women are now leading the standings at 2-0 along with Scotland and Sweden going into tomorrow’s matches. 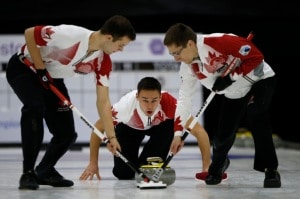 The Canadian men emerged with a 2-1 record after splitting their games today. Winnipeg’s Braden Calvert, along with teammates Kyle Kurz, Lucas Van Den Bosch, Brendan Wilson, alternate Colton Lott and coach Tom Clasper, opened the day with a 7-4 loss to Russia, but bounced back with a 6-4 win over the U.S. In the morning game, the Canadians got off to a good start leading Russia 3-1 after the sixth end. A string of narrowly missed shots by Canada, along with perfectly executed shots by Russia in the seventh end, saw the Russians drawing into the house with their last rock to score five points and take a 6-3 lead. Canada attempted an aggressive style of play to try to mount a comeback, but ended up settling for a single in the eighth end. The ninth end saw Russia make a draw to the four-foot to expand their lead to 7-4. The lead was insurmountable for the Canadian men, needing a steal of three in the tenth end to send the game to extra ends, and the Russians ran Canada out of rocks. “Got an unfortunate break with my last in the seventh. We had a couple bad throws earlier in the end. It’s hard to play it any different when you just miss shots.” This evening’s game was a different story, as the Canadian men came out firing right from the get-go. Calvert executed a perfect double through a skinny port to score four points in the first end. The U.S. men brought themselves back into the game by taking one in the second end and stealing another point in the third. Canada blanked the fourth, then took one in the fifth end. The U.S. team blanked the sixth before taking one in the seventh then stealing another point in the eighth to bring the score to 5-4. Canada picked up a single in the ninth end with a wick and roll, then ran the U.S.A. out of rocks in the tenth end. “It puts you on a pretty big high after the first end. That sometimes can be a bad thing going into the rest of the where you can maybe lose focus in the second end and all of a sudden momentum has changed.” Tomorrow, the Canadian men will take on the host country Estonia at 2 p.m. local (7 a.m. ET). The Canadian women will take on Russia during the morning draw at 9 a.m. local time (2 a.m. ET) and Sweden in the evening at 7 p.m. local (noon ET). The World Junior Curling Championships will be broadcast on the World Curling Federation’s YouTube channel at www.youtube.com/WorldCurlingTV The Canadian women’s team will be the featured game on YouTube tomorrow at 7 p.m. local, noon ET. For the full game and broadcast schedule information, go to: https://wjcc2015.curlingevents.com/schedule For even more of an insider look, Streifel, women’s team alternate, will be keeping a blog of the team’s adventures in Tallinn. Read all about it here: https://k-streif.blogspot.ca This story will be posted as soon as possible at https://www.curling.ca/?lang=fr