Fans getting a show at 2015 Tim Hortons Brier

It will be a relaxing, comfortable evening for Brad Jacobs and his unbeaten Northern Ontario foursome while John Morris and his Team Canada are likely to spend it wondering what is going wrong for them after two days of the 2015 Tim Hortons Brier, presented by SecurTek Monitoring Solutions. 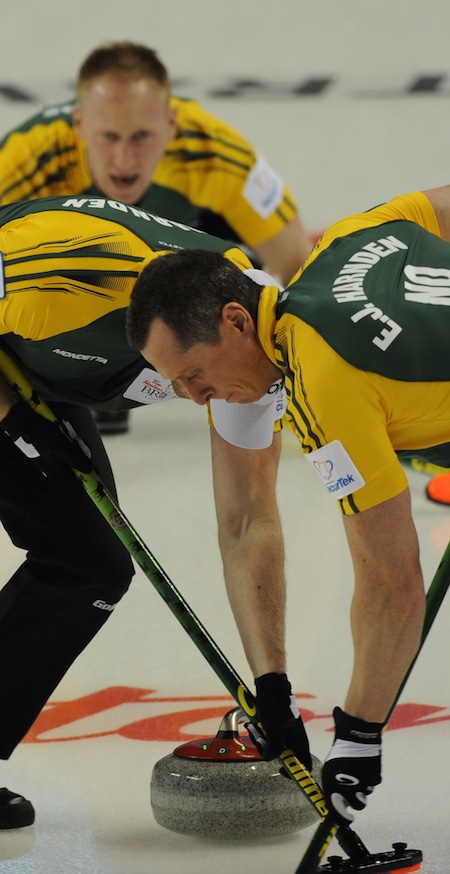 Jacobs and his Sault Ste. Marie team of third Ryan Fry, second E.J. Harnden, lead Ryan Harnden, alternate Eric Harnden and coach Tom Coulterman, stole two in the ninth end to get past Jim Cotter of B.C. (Vernon) 7-5 in today’s fourth draw. That left Jacobs tied with Brad Gushue of Newfoundland-Labrador (St. John’s) who scored triples in the third and eighth ends en route to an 8-4 win over Jamie Koe of Northwest Territories (Yellowknife). Morris lost for the second straight game, this time 7-4 to young Adam Casey of Prince Edward Island (Charlottetown), to sit at 1-2. In the other fourth-draw game Jean-Michel Ménard of Quebec (St-Romuald) scored two in the second and three in the fifth to roll past Jeremy Mallais of New Brunswick (Saint John) 8-5. ”I really like our schedule, the way the games are set up,” said Jacobs, who beat Kevin Koe of Alberta (Calgary) 9-5 in the morning draw. “Now we get the rest of the night off and the morning off to relax. Have a nice meal tonight, do all the things we need to do to be ready for tomorrow. “It was our second game today and I think you could tell we were all a bit tired, but we were able to grind it out and hang in there when things weren’t going perfectly.” They got a big break in nine when Cotter was wide with his final stone, giving Northern Ontario a deuce and a 7-4 lead. Meanwhile Morris, third Pat Simmons, second Carter Rycroft, lead Nolan Thiessen and alternate Tom Sallows have to figure out why they’re slow out of the game after losing both games today. 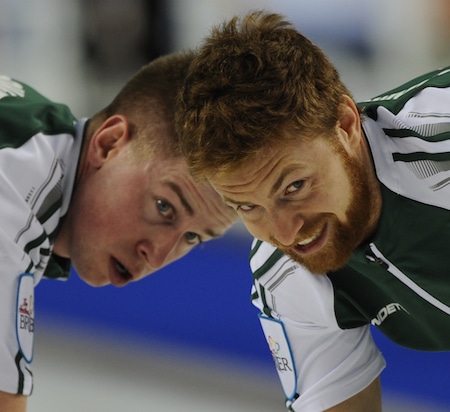 “We’re just struggling with the ice,” said Morris. “Early in the game we think it’s going to do something and it’s not doing it. We’ll have to get a good night sleep and make sure we come out strong tomorrow.” P.E.I. stole one in the first end of sit Team Canada back on its heels and then stole a pair in the fourth and a single in the 10th when Morris’s try for a double that would have given him two and a tie – or maybe even three for the win — failed to get out Casey’s shot rock. “We left him a shot for the win,” admitted Casey. “He probably makes that about 70 per cent of the time but he got a little narrow and just missed. But I’m happy with the way we played. We were in control, although we almost let it slip a bit. We need to be a little sharper coming home.” There’s no morning draw Monday and Team Canada plays New Brunswick in the 1:30 p.m. sixth draw. Today’s final draw goes at 6:30 p.m. MT. TSN/RDS2, the official broadcast partner of Curling Canada’s Season of Champions, will provide complete coverage of the Tim Hortons Brier, leading to the gold-medal game on March 8 at 5 p.m. The winner of the 2015 Tim Hortons Brier will represent Canada at the Ford World Men’s Championship, March 28-April 5 in Halifax, in addition to qualifying for the 2015 Home Hardware Canada Cup in Grande Prairie, Alta., the 2016 World Financial Group Continental Cup in Las Vegas and the 2016 Tim Hortons Brier in Ottawa For ticket information, go to www.curling.ca/2015brier-en/tickets/ This story will be posted in French as soon as available at https://www.curling.ca/2015brier-fr/