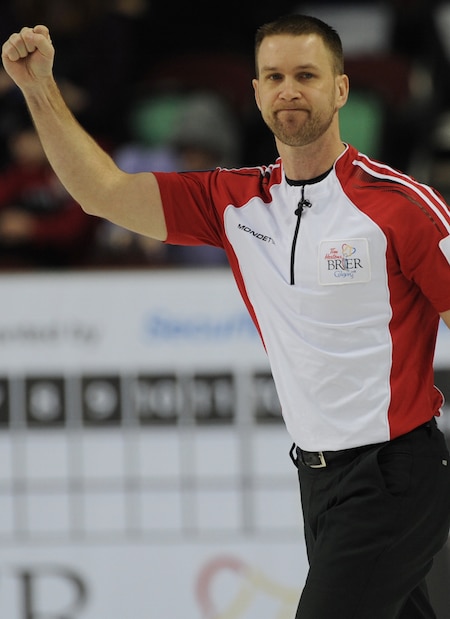 In the other morning games, the youthful Fenelon, Ont., team skipped by Mark Kean won its second straight, 9-8 over veteran Jean-Michel Ménard of Quebec (St-Romuald) and defending champion Kevin Koe of Alberta (Calgary) gave up three in the ninth end to lose 9-5 to Brad Jacobs of Northern Ontario (Sault Ste. Marie). The results moved the three winners to 2-0, dropped Alberta and Quebec to 0-2 and left Team Canada at 1-1. Gushue, third Mark Nichols, second Brett Gallant, lead Geoff Walker and coach Ken Bagnell, scored three in the second end and led 5-1 after four . But Team Canada countered with three of its own in the seventh. “We got off to a good start, played well, fell asleep for a couple of ends but finished strong,” said Gushue. “It was a tough shot we had to make at the end and fortunately we pulled it out. We got a nice three, but they were really strong for four, five ends and really put the pressure on us.” 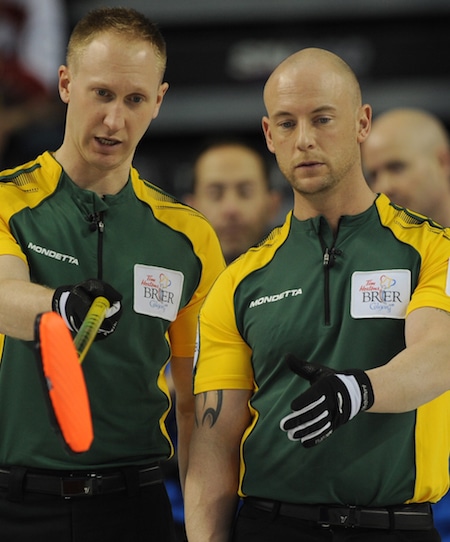 So much that Morris, third Marc Kennedy, second Brent Laing, lead Ben Hebert, alternate Tom Sallows and coach Earle Morris came within inches of winning in the 10th. With last rock Morris tried a double raise runback but was just inches short of getting second shot. “What a shot, what a shot to score one,” marveled Gushue. “I didn’t think it was there for two but if he throws it a hair harder it might be there for two. We were quite content after our last shot stopped that unless he made a miracle shot, at worst we were going to an extra end. Boy what a shot he made to score one and almost two.” Quebec also came with an inch of forcing an extra end against Ontario but a measurement for second shot gave it to Kean for the victory. “I took a quick look, but it was so close I couldn’t tell,” said Kean. “I was a little nervous, I didn’t want to watch (the measurement).” Kean, third Mat Camm, second David Mathers, lead Scott Howard and alternate/coach Bryan Cochrane will face a determined foe in tonight’s fifth draw when they play the winless Koe team. “When a team’s 0-2 they’re going to come out strong,” Kean said. “They’re going to go back to the hotel and figure out what’s going on. If anything we probably don’t want to play them right now … the crowd’s going to be against us but that’ll be fun.” Jacobs, third Ryan Fry, second E.J. Harnden, lead Ryan Harnden, alternate Eric Harnden and coach Tom Coulterman scored deuces in the second, fourth and sixth ends against Alberta and ended the game with three in the ninth. 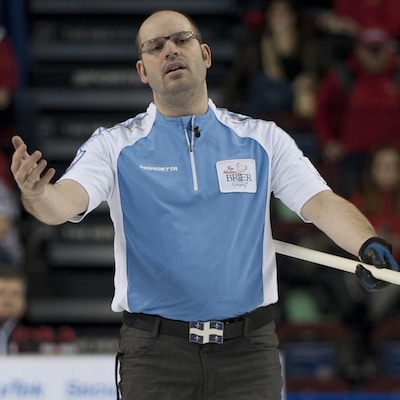 “Both teams made virtually the same amount of mistakes and we were able to get the hammer on them,” said Jacobs. “That’s a big benefit. We were able to force them into making some pretty tough shots and we got some breaks and we made the ones that we needed to make.” There are two more draws today, at 1:30 and 6:30 p.m. MT. TSN/RDS2, the official broadcast partner of Curling Canada’s Season of Champions, will provide complete coverage of the Tim Hortons Brier, leading to the gold-medal game on March 8 at 5 p.m. The winner of the 2015 Tim Hortons Brier will represent Canada at the Ford World Men’s Championship, March 28-April 5 in Halifax, in addition to qualifying for the 2015 Home Hardware Canada Cup in Grande Prairie, Alta., the 2016 World Financial Group Continental Cup in Las Vegas and the 2016 Tim Hortons Brier in Ottawa For ticket information, go to www.curling.ca/2015brier-en/tickets/ This story will be posted in French as soon as available at https://www.curling.ca/2015brier-fr/