TALLINN, ESTONIA – The Canadian men have found their groove after picking up another win on Monday to improve their record to 3-1 at the 2015 World Junior Curling Championships. 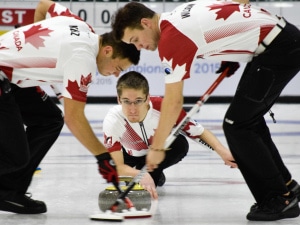 Winnipeg’s Braden Calvert, Kyle Kurz, Lucas Van Den Bosch, Brendan Wilson, alternate Colton Lott and coach Tom Clasper, pulled off a 10-1 win over host country Estonia during the afternoon draw at the Tondiraba Ice Hall. Strong from the start, Canada opened with a deuce in the first end. After Estonia blanked the second end, the Canadians stole back-to-back points in the third and fourth ends when Estonia failed to deliver on its last shots. The host country picked up its only point of the game with a draw to the eight-foot after a well-executed end that had the Canadians on their toes. Wanting to get alternate Lott into a game early on the week, third Kurz took a seat behind the glass. Lott, the 2013 World Juniors bronze-medallist with the Matt Dunstone team, made his debut on the ice taking over the third position. Canada finished off the game with another deuce in the sixth end, then a steal of four in the seventh end. Though only in for two ends, Lott managed to shoot a perfect 100 per cent. “It was awesome to get out onto the ice,” said Lott. “It was only a couple ends, but it reminded me of playing in Sochi [at the World Juniors] in 2013 and it was just so nice to get back out there.” Despite the score, the Canadian men didn’t let their guard down and focused instead on the big picture. “It was a good game to sharpen our skills a little bit and start throwing better rocks than we did the day before,” said Calvert. 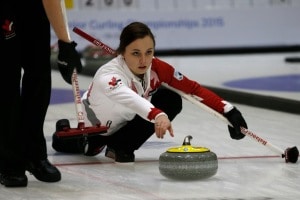 On the women’s side, Edmonton’s Kelsey Rocque, Danielle Schmiemann, Holly Jamieson, Jessica Iles, alternate Kristen Streifel and coach Amanda-Dawn Coderre kept their place on top of the standings. The women maintained an unblemished 4-0 record with wins against Russia and Sweden. In the morning game against Russia, Canada came out firing and dominated the game with a convincing 10-3 win after eight ends. Russia opened the scoring with a single in the second end. Canada answered back with a three-ender in end three. The Canadians held Russia to another single in the fourth end before taking back a deuce with hammer in the fifth to lead 5-2. The fans were treated to a show with great shot-making skills displayed by both teams. Canada and Russia traded single points in the sixth and seventh ends, bringing the score to 6-3. The Canadians put the pressure on in the eighth end with well-thrown hits and runbacks. Looking at four Canadian rocks, the last Russian rock sailed through the house giving Canada a 10-3 win. “Russia’s a superpower of curling, so we knew it would be a tough game,” said Rocque. “We just took it one shot at a time.” The evening game was a very low-scoring match with neither team wanting to play aggressively for fear of giving up a big end. Instead, the teams opted to keep it simple with three blank ends in the first half of the game. After forcing the Swedish team to play a hit against two Canadian counters in the third end to pick up a point, the tables were turned in the fifth when Rocque, defending World Juniors gold-medallist, had to make a pressure draw against four to pick up a single. Canada picked up a steal of one in the sixth end when Swedish skip Isabella Wranaa came up light on a draw against two Canadian rocks. Despite having a couple more rocks in play the seventh end, a well-executed double by Rocque on her last rock gave Sweden the opportunity to blank and carry over the hammer into the eighth end. Team Canada continued to put the pressure on the Swedes during the eighth and forced Wranaa to make a draw for her single to tie the game. The two teams took a more aggressive approach in the ninth end with many rocks in play. In the end, Rocque picked the Swedish shot rock off the button to give her team a two-point lead going into the tenth end where Canada ran Sweden out of rocks for the 4-2 win. “The way the score was we decided to keep it [more defensive],” said Rcoque. “Sweden’s a really good team, so we knew we’d have to keep it close.” Rocque attributes her team’s success to keeping it loose and positive on the ice. “I think we’re not taking it too seriously. It sounds a little odd, but we’re having lots of fun out here. We’re just embracing the moment.” The Canadian men will face Italy Tuesday morning at 9 a.m. local (2 a.m. ET) and Sweden in the evening at 7 p.m. local (noon ET). The Canadian women will take on England in the afternoon at 2 p.m. local time (7 a.m. ET). The World Junior Curling Championships will be broadcast on the World Curling Federation’s YouTube channel at www.youtube.com/WorldCurlingTV The Canadian men’s team will be the featured game on YouTube Tuesday at 7 p.m. local, noon ET. For the full game and broadcast schedule information, go to: https://wjcc2015.curlingevents.com/schedule For even more of an insider look, Streifel, women’s team alternate, will be keeping a blog of the team’s adventures in Tallinn. Read all about it here: https://k-streif.blogspot.ca This story will be posted as soon as possible at https://www.curling.ca/?lang=fr