Ottawa, Summerside to host 2017 Tim Hortons Roar of the Rings, Road to the Roar

The road for Canada’s bid to become the first country to repeat as men’s and women’s Olympic curling gold-medallists will go through Ottawa and Summerside, P.E.I., it was announced today by Curling Canada. 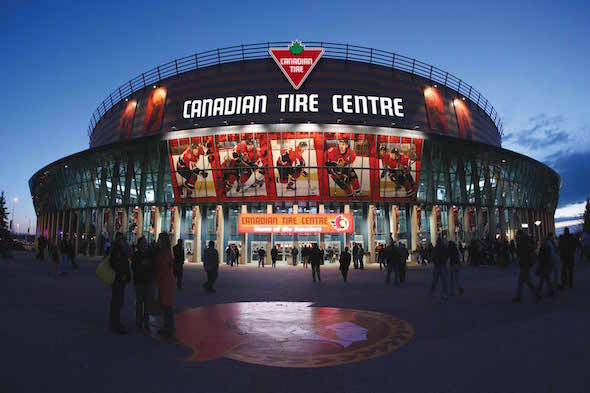 The Canadian Tire Centre, host of the 2017 Tim Hortons Roar of the Rings.

Ottawa’s Canadian Tire Centre will play host to the 2017 Tim Hortons Roar of the Rings from Dec. 2-10, while the final qualifying tournament for that event, the Road to the Roar Pre-Trials, will take place Nov. 6-12 at Credit Union Place in Summerside. “We received an amazing response to the Request for Proposal we put out to host these events, and it was an extremely hard decision that came right down to the wire,” said Greg Stremlaw, Curling Canada’s Chief Executive Officer. “All of the candidate cities put in superb bids, and once we got to our shortlist, we knew that we had nothing but winning proposals on our hands. It’s a testament to the popularity of our sport, and these events, that there was so much interest in hosting them, and we know Ottawa and Summerside will put on terrific shows in 2017.” The process for determining the competing teams for both the Road to the Roar and the Tim Hortons Roar of the Rings, as well as the formats for both events, will be announced before the end of this curling season. The winner of the Tim Hortons Roar of the Rings will represent Canada at the 2018 Winter Olympics in Pyeongchang, South Korea. This will mark the fourth time that Tim Hortons has sponsored the Trials, following the 2005, 2009 and 2013 editions; that’s in addition to one of North America’s leading quick-service restaurant chains being the title sponsor of the Tim Hortons Brier. “The commitment Tim Hortons has shown to the sport of curling speaks for itself,” said Stremlaw. “Tim Hortons has repeatedly gone above and beyond to demonstrate its passion and enthusiasm for making our events special and memorable, and they continue to play a significant role in raising the profile of our sport.” It will be the first time a major curling event has been staged at the Canadian Tire Centre, the 19,153-seat home of the National Hockey League’s Ottawa Senators. But the city has hosted numerous curling events over the years, and will play host to the 2016 Tim Hortons Brier, March 5-13. 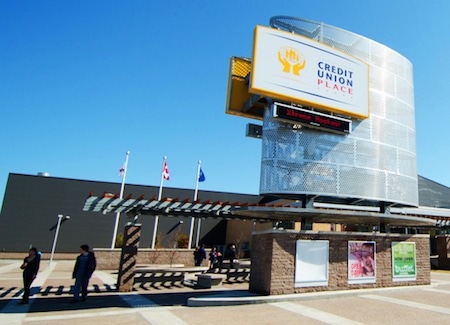 Credit Union Place will play host to the 2017 Road to the Roar Pre-Trials.

Meanwhile, it will be the first time Summerside’s Credit Union Place has hosted a Curling Canada Season of Champions event. The 4,228-seat arena is home to the Summerside Western Capitals of the Maritime Junior A Hockey League. TSN/RDS2, the official broadcast partner of Curling Canada’s Season of Champions series, will provide complete draw-by-draw coverage of both events, the first time the Road to the Roar Pre-Trials has been broadcasted from start to finish. “Our partners at TSN have demonstrated time and time again that their passion and dedication to the sport of curling has no match,” said Stremlaw. “We’re ecstatic that TSN will be showing curling fans unprecedented coverage of the events that will decide our teams that will play in Pyeongchang.” Already qualified for the Road to the Roar Pre-Trials are the winners of the 2014 Home Hardware Canada Cup, presented by Meridian Manufacturing — men’s champ Mike McEwen of Winnipeg and women’s champ Val Sweeting of Edmonton. Also in the Pre-Trials field is recently crowned Scotties Tournament of Hearts champion Jennifer Jones of Winnipeg, while the winner of this week’s Tim Hortons Brier, presented by SecurTek Monitoring Solutions, in Calgary also will earn a Pre-Trials berth. It was Team Jones and the Brad Jacobs team from Sault Ste. Marie, Ont., that prevailed at the 2013 Tim Hortons Roar of the Rings in Winnipeg to qualify for the 2014 Winter Olympics in Sochi, where they produced double gold for Canada — the first time one nation has swept the Olympic curling competition. While Team Jones pre-qualified for the Tim Hortons Roar of the Rings, Team Jacobs needed to come out of the Road to the Roar Pre-Trials in Kitchener, Ont., to have the chance to play for Olympic gold. Canadian curling teams have reached the podium in every Olympic curling competition since the sport was re-introduced as a medal sport in 1998 at Nagano, Japan. The first men’s and women’s direct qualifiers for the 2017 Tim Hortons Roar of the Rings will be decided at the 2015 Home Hardware Canada Cup, Dec. 2-6 in Grande Prairie, Alta.