Jim Cotter and his B.C. team have played their share of tight games so they weren’t fazed by another one Tuesday morning, hanging tough until they got the break they wanted in the ninth end to score four and beat Mark Kean of Ontario 8-3 in Draw 8 of the Tim Hortons Brier, presented by SecurTek Monitoring Solutions.

“We seem to play a lot of tight games so we’re used to that,” said Cotter, whose team won every game by a single point in the provincials. “We don’t seem to blow anybody away, we don’t try to. It’s just game management and end management and just try to be tied up coming home with (hammer), sort of thing. While B.C. and Ontario were battling it out, Reid Carruthers of Manitoba (Winnipeg) cruised to an 11-3 win over Jamie Koe of Northwest Territories (Yellowknife), Kevin Koe of Alberta (Calgary) beat Adam Casey of P.E.I. (Charlottetown) 8-4 and Steve Laycock of Saskatchewan (Saskatoon) scored three in the eighth end to get past Jeremy Mallais of New Brunswick (Saint John) 7-4. The results left Saskatchewan alone in second at 4-1 behind unbeaten 5-0 Northern Ontario. B.C, Manitoba, Alberta and Newfoundland-Labrador are at 3-2 followed by Ontario, Quebec, Team Canada and P.E.I. at 2-3, New Brunswick 1-4 and the Territories 0-5. Cotter, third Ryan Kuhn, second Tyrel Griffith, lead Rick Sawatsky, alternate Grant Olsen and coach Pat Ryan of Vernon got up early, scoring two in the second and stealing one in the third. But the young Fenelon Falls, Ont., foursome of Kean, Mat Camm, second David Mathers, lead Scott Howard and alternate/coach Bryan Cochrane got one in the fourth and two in the eighth to cut the deficit to 4-3. “Thankfully we got up a little early but those guys, they just kept pouring it on,” Cotter said. “We just wanted to stay with the program, make the simple shots and we struggled a bit with that I thought. But the guys really poured it on in the ninth end.” 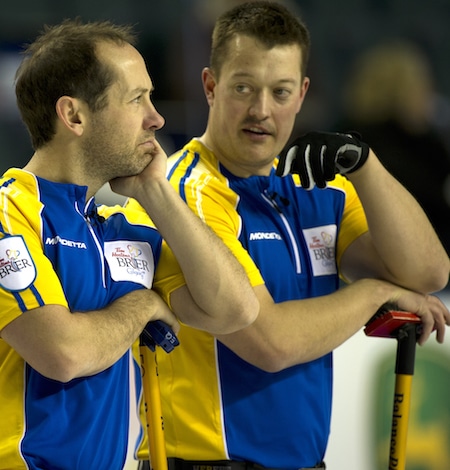 Ontario tried using a long guard to bury their rocks but B.C. kept digging them out, ultimately leaving Kean facing five B.C. counters with his final stone. He drew the four foot but knew Cotter had a shot for four, possibly five, with an angled raise takeout. “Really we didn’t have a whole lot,” Kean explained. “We knew Jim loves his outturn and had a really good chance of making it. We just tried to give him the hardest shot at it. He was a little tight with that last one but you can really hold it on this ice. If we had got into the right spot he might not have had the shot, but we were just trying to force him to one.” Alberta finally won a hammer to begin a game and used it to great advantage, scoring two in the first and three in the third en route to a solid 8-4 win over Casey. 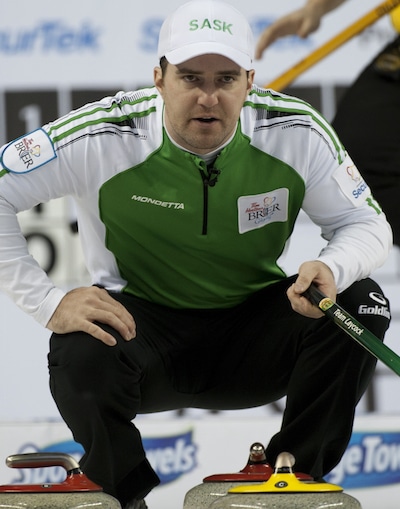 “First game we won the hammer, which is big against these teams, to control the hammer, control the game,” said lead Ben Hebert. “Marc (Kennedy) put on the nail for us to get the brick and that was big and we got the deuce. The last few games we’ve controlled, we’ve got a healthy skipper back, he’s really dialed in and the guys are playing great.” TSN/RDS2, the official broadcast partner of Curling Canada’s Season of Champions, will provide complete coverage of the Tim Hortons Brier, leading to the gold-medal game on March 8 at 5 p.m. The winner of the 2015 Tim Hortons Brier will represent Canada at the Ford World Men’s Championship, March 28-April 5 in Halifax, in addition to qualifying for the 2015 Home Hardware Canada Cup in Grande Prairie, Alta., the 2016 World Financial Group Continental Cup in Las Vegas and the 2016 Tim Hortons Brier in Ottawa For ticket information, go to www.curling.ca/2015brier-en/tickets/