Pat Simmons took over skipping a struggling Team Canada Tuesday and the move stabilized the Calgary foursome and provided enough energy and shot-making to give them a badly needed victory, 6-3 over Jamie Koe of Northwest Territories at the Tim Hortons Brier, presented by SecurTek Monitoring Solutions. 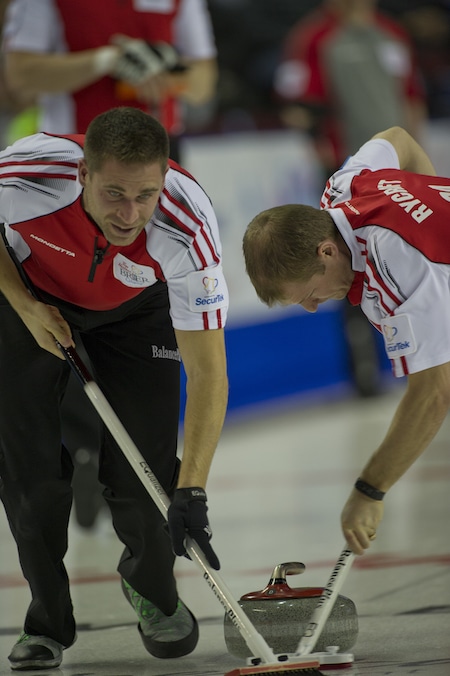 John Morris, saying he knew the team needed a spark and needed it quickly, stepped back to playing third and helped set things up for Simmons to make delicate draws that led to a tiebreaking single in the fifth end and a steal of two in the sixth. In the other afternoon games, Brad Jacobs of Northern Ontario (Sault Ste. Marie) stole nine points over five consecutive ends to whip young Adam Casey of Prince Edward Island (Charlottetown ) 11-1, Brad Gushue of Newfoundland-Labrador (St. John’s) beat Jeremy Mallais of New Brunswick (Saint John) 10-2 and Jean-Michel Menard of Quebec (St-Romuald) made a spectacular raise double to score four in the ninth end and beat Jim Cotter of B.C. (Vernon) 8-6. The results leave Northern Ontario atop the standings at 6-0 followed by Saskatchewan at 4-1, Newfoundland-Labrador at 4-2, Alberta and Manitoba at 3-2, Quebec, Team Canada and B.C. at 3-3, Ontario at 2-3, P.E.I. at 2-4, New Brunswick at 1-5 and the Territories winless in six games. Saying he knew the team was missing some key ingredients, Morris decided to go with his instincts that told him to swap spots with Simmons. “

We were all shooting pretty well but we were missing something,” said Morris, who took over last year’s Brier-winning team when skip Kevin Koe left. “It’s hard to explain …. when you’re bang on and making everything you can beat anybody, but we haven’t had that feeling this year. As much as I kept hoping it would happen it just never did. I think our best chance to win this was making that move. “I thought our options were keep doing what we’re doing and maybe go 5-5 at the Brier and fade away into the sunset, or make a change and still try to win this thing. I would play lead on a team if I knew we were going to be champions. I’ve seen Pat throws, he’s an amazing shooter.” After blanking the first two ends, Canada took one in the third, traded singles in the fourth and fifth and then stole a pair in five to take control of the game. “We needed that as a team,” Simmons said of getting ahead early. “Throughout the week we’ve been getting down early and trying to claw back. We were able to in a few games and not able to in others so I thought if we could keep control when we got hammer that was big for us.” Simmons looked and felt comfortable as skip, a role he had last played in the 2010 Players Championship. Team Canada plays Kevin Koe and his new Alberta team tonight. Jacobs and his Olympic championship team stole nine points over five ends – two through six – and hammered P.E.I. 11-1 in eight ends. 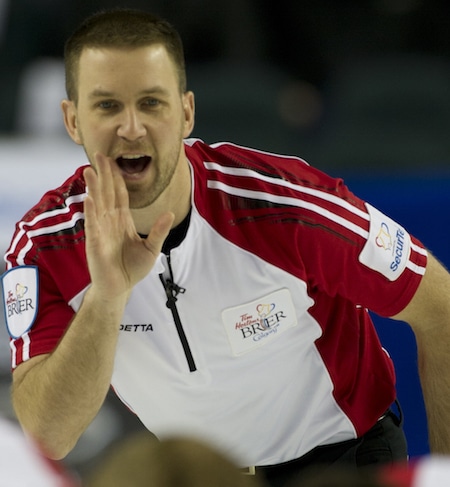 “The only way something like that is going to happen is if the other team isn’t making any shots and Adam wasn’t making any of his last shots,” said Jacobs. “It was a very frustrating game for P.E.I. They probably would have liked to have gotten off the ice a little sooner, but we’ll take the win any way we can get it.” And hey, he said, his team has been similar situations in their career. “There’s been a few games where we’ve wanted to shoot ourselves and it’s definitely a frustrating thing. There was times when we would have loved to pull a curtain over ourselves and get off the ice.” One benefit of the lopsided victory was the option to get Eric Harnden into the game. The team’s alternate is the father of second E.J. Harnden and lead Ryan Harnden and an uncle to Jacobs. “Eric got in a couple of games ago and had two throw-throughs so that’s not as much fun for him,” said Jacobs. “Tonight he had two open hits and made them both, so that was fun. I know he likes coming into the game. Now he’s ready, he’s warmed up, he’s a well-oiled machine.” TSN/RDS2, the official broadcast partner of Curling Canada’s Season of Champions, will provide complete coverage of the Tim Hortons Brier, leading to the gold-medal game on March 8 at 5 p.m. The winner of the 2015 Tim Hortons Brier will represent Canada at the Ford World Men’s Championship, March 28-April 5 in Halifax, in addition to qualifying for the 2015 Home Hardware Canada Cup in Grande Prairie, Alta., the 2016 World Financial Group Continental Cup in Las Vegas and the 2016 Tim Hortons Brier in Ottawa For ticket information, go to www.curling.ca/2015brier-en/tickets/