Familiar names atop the standings at Tim Hortons Brier 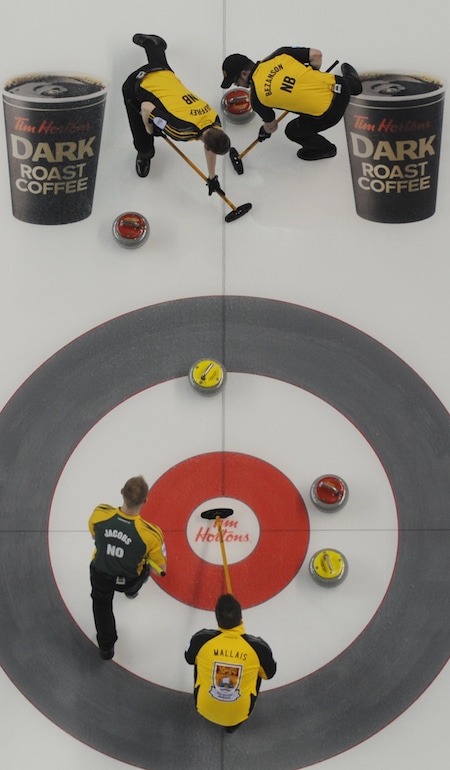 Jacobs and his Northern Ontario (Sault Ste. Marie) Olympic champions continued their unbeaten romp with a 7-4 win over Jeremy Mallais of New Brunswick (Saint John) while Gushue and his crew from Newfoundland-Labrador (St. John’s) stayed hot on their heels with a 9-6 victory over Adam Casey of Prince Edward Island (Charlottetown.) Ménard’s Quebec (St-Romuald) foursome got past a stubborn Jamie Koe of Northwest Territories (Yellowknife) 8-5 while Team Canada nipped Jim Cotter of B.C. (Vernon) 8-7 for its third straight win since Pat Simmons took over skipping for Morris. The results left Northern Ontario at 8-0 and having clinched at least a tiebreaker spot, Newfoundland-Labrador 6-2, Saskatchewan 4-2, Canada and Quebec 5-3, Alberta and Manitoba 3-3, B.C. 3-4, Ontario 2-4, P.E.I. 2-5, New Brunswick 1-6 and the Territories 0-7. Northern Ontario can clinch a berth in the Page playoff one-two game with a win Wednesday afternoon against Saskatchewan. Gushue, third Mark Nichols, second Brett Gallant, lead Geoff Walker and coach Ken Bagnell, scored three in the fourth end and then stole three more in the fifth to take control of the team’s third straight win. “It kind of snuck up a bit,” he said of the steal. “It looked like we had a good end set up and kind of got a mistake from Adam on his first one that really put him in rough shape. And then I made a real good freeze on my last. He didn’t have a shot to score but he might have had a shot to cut us down to one and fortunately for us, he missed it.” 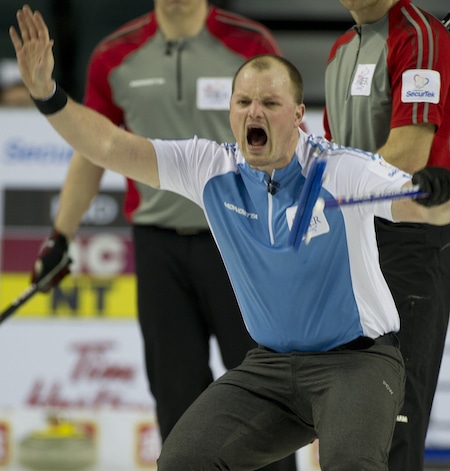 Quebec vice-skip Martin Crête apparently didn’t want his sweepers to sweep. But we could be wrong. (Photo, Curling Canada/Michael Burns)

After losing both games on “Black Monday” Gushue’s team has turned around its game, although he knows it still has to get sharper. “The last three games have been good. We can still be sharper and we’re going to need to be once we get up against Alberta and Northern Ontario in our next two,” he said. “We seem to throw in these mistakes out of nowhere, those zero per cent shots where you don’t get any benefit from it and actually hurt yourself by throwing it. We’ve been doing that more than I would like.” Ménard, third Martin Crête, second Éric Sylvain and lead Phillipe Ménard, scored two in the first end and three in the seventh but still needed to run Koe out of rocks in the 10th. “Every time I come to the Brier and we play Jamie Koe, it always comes down to the last rock so we knew what we were up again,” said Ménard, “Jamie is an amazing shot-maker and when he’s hot he’s hot so we had to keep our focus.” Quebec has won five of its last six games after starting the Tim Hortons Brier 0-2. Team Canada won its third straight since Morris and Simmons traded places on Tuesday. Simmons made a pressure-packed runback take-out to score two in the 10th for the win.

You may have seen these guys hanging around the Scotiabank Saddledome. (Photo, Curling Canada/Michael Burns)

“It was looking good, then it wasn’t,” Simmons said of the final end. “My first one, how it ended up, it was going to give us a chance at something anyways.” Cotter tried to draw into second shot but didn’t get the curl at the end and left Simmons with a second chance at a runback for the win. TSN/RDS2, the official broadcast partner of Curling Canada’s Season of Champions, will provide complete coverage of the Tim Hortons Brier, leading to the gold-medal game on March 8 at 5 p.m. The winner of the 2015 Tim Hortons Brier will represent Canada at the Ford World Men’s Championship, March 28-April 5 in Halifax, in addition to qualifying for the 2015 Home Hardware Canada Cup in Grande Prairie, Alta., the 2016 World Financial Group Continental Cup in Las Vegas and the 2016 Tim Hortons Brier in Ottawa For ticket information, go to www.curling.ca/2015brier-en/tickets/ This story will be posted in French as soon as available at https://www.curling.ca/2015brier-fr/