Brad Gushue nearly jumped out of his shoes after a spectacular final shot he called his best ever gave his Newfoundland-Labrador team a heart-stopping 8-7 victory over Alberta Wednesday at the Tim Hortons Brier, presented by SecurTek Monitoring Solutions.

The win moved his team to 7-2, within range of at least a tiebreaker, while across the other side of the Scotiabank Saddledome ice Brad Jacobs of Northern Ontario (Sault Ste. Marie) clinched a berth in the Page playoff 1-2 game with a tough 4-3 win over Steve Laycock of Saskatchewan (Saskatoon). In other games in the 12th draw Jean-Michel Ménard of Quebec (St-Romuald) won his sixth game in the last seven, 7-4 over Reid Carruthers of Manitoba (Winnipeg) and the suddenly revived Team Canada (Calgary) won its fourth straight under skip Pat Simmons, 7-4 over Mark Kean of Ontario (Fenelon Falls). The results leave Northern Ontario at 9-0, Newfoundland-Labrador at 7-2, Quebec and Team Canada at 6-3, Saskatchewan at 4-3, B.C., Manitoba and Alberta at 3-4, Ontario and P.E.I. at 2-5, New Brunswick at 1-6 and Northwest Territories 0-7. Asked to describe his final shot, with Alberta sitting two and looking to have the victory in hand, Gushue said it was the “best shot I’ve ever made. “When you put in the importance and the difficulty of it, to pull it off is pretty special. Definitely going to be something I will remember but more importantly it’s big for this event. For us to win that, we’re going to get a tiebreaker, worst case. I think if we win one of our last two games we should get into the 1-2 game. I might be a little quick saying that but at least the ball’s in our hands going into tomorrow.” But what was the shot? “I guess it was a double raise, double, around the horn backwards, something or other,” he laughed. “It was crazy. That’s the only shot we thought was there. I envisioned it the way it happened. It’s just the percentage of actually making it happen are so small, because not even a millimetre on the top rock and we miss it.” 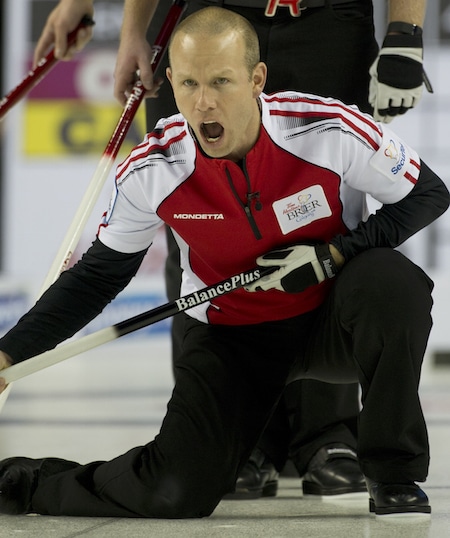 The shot was a huge emotional lift for Gushue and teammates third Mark Nichols, second Brett Gallant, lead Geoff Walker and coach Ken Bagnell. It was an arrow through the heart of Kevin Koe and his Alberta team of third Marc Kennedy, second Brent Laing, lead Ben Hebert, alternate Jamie King and coach John Dunn. “A tough one.” Koe said of the loss. “I didn’t think (the shot) was there. I thought we had it in the bag honestly. I don’t know how many times out of a 100 he makes that but unfortunately for us he did and that’s just kind of the way it’s been going, wrong side of the inch.” Jacobs had his toughest game of the week so far as Laycock and his team matched the Olympic gold medallists almost shot-for-shot until the final stone in the 10th. Jacobs buried a counter then put up a tight guard with his final stone, forcing Laycock to try a difficult draw to the button. He was heavy, leaving Jacobs with the win. 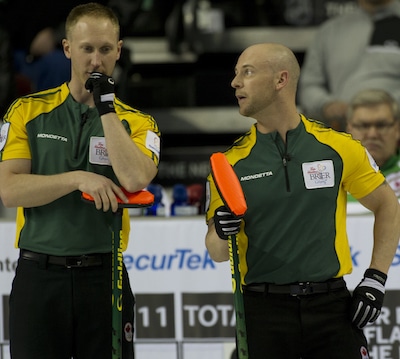 “We were battling ourselves a little bit,” Jacobs said of the game. “I know yesterday I said we weren’t tired, bring on more games … but I think we were all a bit tired today. Fighting it a bit. That was a tough test.” TSN/RDS2, the official broadcast partner of Curling Canada’s Season of Champions, will provide complete coverage of the Tim Hortons Brier, leading to the gold-medal game on March 8 at 5 p.m. The winner of the 2015 Tim Hortons Brier will represent Canada at the Ford World Men’s Championship, March 28-April 5 in Halifax, in addition to qualifying for the 2015 Home Hardware Canada Cup in Grande Prairie, Alta., the 2016 World Financial Group Continental Cup in Las Vegas and the 2016 Tim Hortons Brier in Ottawa For ticket information, go to www.curling.ca/2015brier-en/tickets/ This story will be posted in French as soon as possible at https://www.curling.ca/2015brier-fr/